Big 12 commish Bowlsby stepping away from role this year 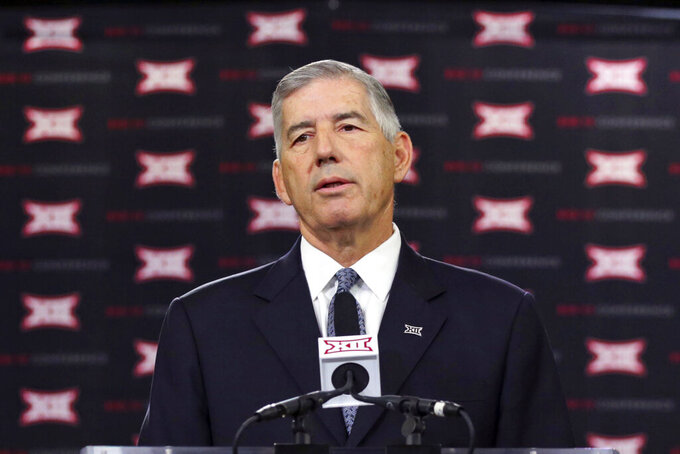 FILE - In this July 17, 2017, file photo, Big 12 commissioner Bob Bowlsby speaks to reporters during the Big 12 NCAA college football media day in Frisco, Texas. Bowlsby said Tuesday, April 5, 2022, that he will step away from his role as Big 12 commissioner later this year after a decade in that job. (AP Photo/LM Otero, File)

Bob Bowlsby will step away from his role as Big 12 commissioner later this year after a decade in the Power Five conference that's facing a transition in membership and negotiations over a new media rights deal — like it was when he first took the job. .

“After more than 40 years of serving in leadership roles in intercollegiate athletics, including the last 10 with the Big 12, and given the major issues that college sports in general and the Big 12 specifically will address in the next several years, I have reached a natural transition point in my tenure as commissioner, as well as in my career,” the 70-year-old Bowlsby said in a statement Tuesday.

He will remain as the Big 12′s leader until a new commissioner is appointed. The expectation is that Bowlsby, whose contract goes into 2025, will then transition into an interim role with the league.

When Bowlsby arrived in 2012, the Big 12 was coming off a two-year period when it lost four schools to three other conferences and at times appeared to be on the brink of collapse before settling as a 10-team league with the additions of TCU and West Virginia. Only months after that, the Big 12 had a new multibillion dollar TV deal with ESPN and Fox Sports that goes through the 2024-25 academic year.

Within weeks after Oklahoma and Texas accepted formal invitations to join the SEC last August, the Big 12 expanded by adding BYU, UCF, Cincinnati and Houston.

Currently the longest-serving Power Five commissioner, Bowlsby came to the Big 12 after six years as athletic director at Stanford. Before 2006, he had been AD at Iowa since 1991, overseeing the athletic program where growing up he sold soda at football games, and previously had been Northern Iowa's AD for seven years.

Bowlsby said he believes the Big 12 and its schools are in a strong position going into the future. He said his move will allow the next commissioner to take the lead on such issues as negotiating the new grant of rights and media rights, and the arrival of new conference members.

“Bob is a man of impeccable character who has led with great integrity throughout his entire career. He is a legend in our profession and it is safe to say that we will miss his experience, wisdom, savvy and leadership as we continue to confront a reimagination of intercollegiate athletics’ future,” Iowa State AD Jamie Pollard said. “I believe college athletics needs more Bob Bowlsbys.”

The Big 12 will use an executive consulting firm to assist in an extensive national search process for the new commissioner that will begin in the next few weeks.

BYU, an independent in football, will join the Big 12 for the 2023-24 athletic season. Current American Athletic Conference teams UCF, Cincinnati and Houston will join no later than July 1, 2024.

All four of those future members were among 11 schools interviewed by the Big 12 in 2016 when it considered expansion before staying at 10 teams.

Texas and Oklahoma, the only Big 12 teams to win national championships in football, have said they will honor their current contracts with the Big 12 until 2025, when the conference’s current television rights contracts run out, before moving to the SEC.

Lawrence Schovanec, president of Texas Tech and chairman of the Big 12's board of directors, expressed appreciation for the job Bowlsby has done.

“Bob has consistently driven distributable revenue growth for the conference’s member institutions, has stood strong during turbulent times in the world of collegiate sports, has led innovation within collegiate athletics, and has worked tirelessly to ensure the stability and future of the Big 12 Conference," Schovanec said.

About $345 million of total revenue was distributed among the 10 members of the Big 12 for the 2020-21 academic year that was greatly affected by the COVID-19 pandemic.