Fans checking out as Hoiberg's Huskers continue to flounder 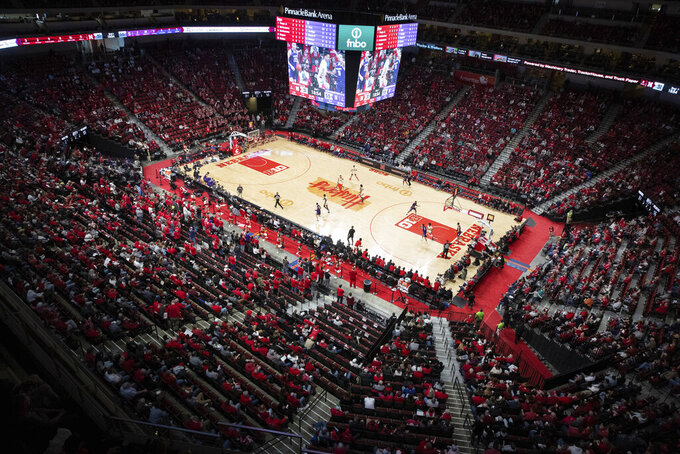 Fans watch Northwestern play against Nebraska during the second half of an NCAA college basketball game Saturday, Feb. 5, 2022, in Lincoln, Neb. Northwestern defeated Nebraska 87-63. As Nebraska grinds through one of the worst men's basketball seasons in program history under third-year coach Fred Hoiberg, the empty seats at Pinnacle Bank Arena are growing in number. (AP Photo/Rebecca S. Gratz)

LINCOLN, Neb. (AP) — As Nebraska grinds through one of the worst men's basketball seasons in program history under third-year coach Fred Hoiberg, empty seats are outnumbering occupied ones at Pinnacle Bank Arena.

The average number of tickets scanned at the gate for regular-season home games through 16 home dates was 7,160, less than half of the 15,000-seat capacity, according to figures provided to The Associated Press. Three consecutive January games drew fewer than 5,800 fans.

Athletic director Trev Alberts acknowledged some are staying away because of COVID-19 fears or frustration with mask mandates and that some of the tipoff times have not been conducive to big crowds.

“But it certainly is the play on the court that is the overriding factor in terms of fan interest and attendance,” Alberts said in an interview. “That’s pretty obvious, I think.”

While a big attendance decline is a bad sign for any team, it is particularly ominous for a school like Nebraska. The school has an unusually large fan following for most sports despite being in a low-population state — “it sets us apart from our peers,” Alberts said — and the athletic program's fortunes have a significant impact on the local economy.

Sharp attendance declines preceded the dismissals of four of the past five basketball coaches. This year's 22% dip in ticket usage from 2019-20 indicates fans are checking out. There were no fans allowed in 2020-21 because of the pandemic.

The Huskers (6-17) are 0-12 in conference play for the first time and four of their five losses by at least 24 points have come against Big Ten opponents. Their most lopsided, 102-67 to unranked Michigan, came Dec. 7 at home.

Saturday, they trailed 11th-place Northwestern by 35 points with five minutes left before losing 87-63. Fans left in droves at halftime, when the Huskers were down 22 points.

“There have been stretches of this season where our play hasn’t necessarily reflected those very important cultural ideals that Nebraskans hold near and dear. You can see the reaction of our fan base to our programs that exemplify those things and those that don’t, and there’s a pretty stark contrast in terms of fan and donor interest," he said.

Hoiberg was one of the splash hires of the 2019 cycle. He was so popular as a player and coach at Iowa State that he's still known as “The Mayor” in Ames, Iowa. His bad run as Chicago Bulls coach didn't take away from the excitement over his hiring at Nebraska.

The program, however, is now mired in its worst three-year stretch. Hoiberg is 5-46 in Big Ten games, 20-62 overall and has lost 19 in a row against opponents from Power 5 conferences and the Big East.

Hoiberg was hired by previous athletic director Bill Moos and is being paid $3.5 million this year. He would be owed $18.5 million if he were fired.

Under NCAA attendance reporting policy, the Huskers rank 11th in the nation with an average of 15,229 per game. That figure is arrived at from tickets sold, the visiting team’s allotment and another 300 for media and arena staff. Many schools' public attendance reports have a wide variance between tickets sold and tickets used.