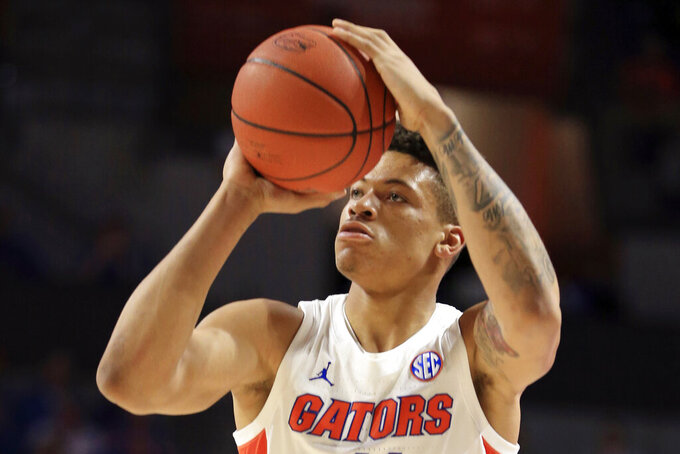 FILE - In this Jan. 25, 2020, file photo, Florida forward Keyontae Johnson (11) takes a shot against Baylor during the first half of an NCAA college basketball game in Gainesville, Fla. Johnson hasn't practiced or played since collapsing on the court last December. (AP Photo/Matt Stamey, File)

GAINESVILLE, Fla. (AP) — The hope for Florida's Keyontae Johnson is to be “happy and healthy" this season.

Coach Mike White said Tuesday that Johnson has not been medically cleared to practice even though it's been nearly 10 months since the standout forward collapsed on the court and was rushed to a nearby hospital. White said “Coach Key” will remain an integral part of the team.

“(We hope) he continues to be the awesome young man that he is, continues to stay ready for whatever’s ahead for him, continues to be a great person, a great teammate, an extension of our staff, of course,” White said. "He’s a big-time Gator. He’s a Gator great in my mind.

“No change in status. Has not been cleared to this point, but he’s very much a big part of what we’re doing.”

Johnson, the Southeastern Conference's preseason player of the year in 2020, slammed face-first to the floor seconds after coming out of a timeout during a Dec. 12 game at Florida State. Teammates, coaches, opponents and fans watched in shock as Johnson became a trauma patient.

His family said in February that his medical condition was not related to a previous positive COVID-19 test. But the family did not say what doctors believe caused Johnson to fall without warning.

He spent two nights in a hospital before being airlifted back to Gainesville with his mother by his side. His recovery was a slow process. He was first able to follow simple commands. He then started breathing on his own. He eventually chatted with friends and teammates via FaceTime.

He made his first public comment Dec. 18, thanking everyone for their prayers and support. He was released from the hospital four days later, 10 days after his collapse and in time to spend Christmas with his family and then be on hand for Florida’s first practice following a two-week hiatus in which the Gators canceled four games.

Florida reached its fourth straight NCAA Tournament despite playing most of the season without Johnson.

“The resilience these young men showed was incredible,” White said.

White would love to have Johnson in the mix, too, but he's not counting on it.

Johnson hosted a basketball camp for about 60 kids this summer, getting paid for the endeavor as he took advantage of new NCAA rules that allow current student-athletes to make money from their name, image or likeness. He continues to “patiently wait" on medical clearance that might never come.

In the meantime, he resumed his role as Florida's extra coach and wore a whistle during the team's first practice Tuesday.

“He’s in my ear a bunch with certain drills or certain things he notices,” White said. “We lost a team free-throw shooting competition and he said, ‘Coach, I think we need to up the ante here and double down and we turn this 22 into a 44. Let's run it back.’

“He’s got a good pulse as to what’s going on with these guys.”