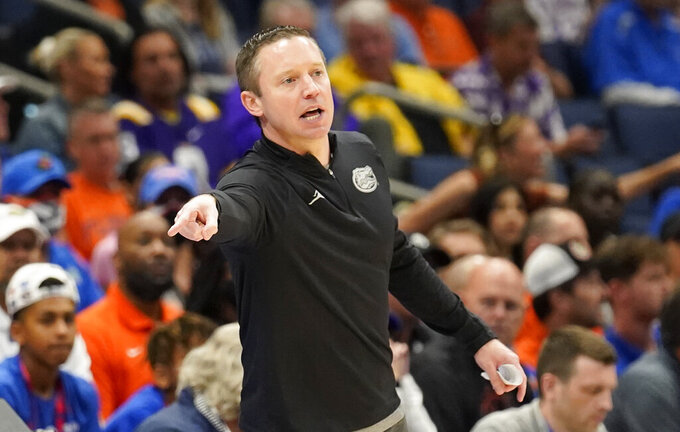 Georgia lured Mike White away from Southeastern Conference rival Florida on Sunday, a surprising hire by the Bulldogs' moribund basketball program only three days after Tom Crean was fired.

White's hiring was approved by Georgia's athletic association's executive board in a conference call that was held just as the NCAA Tournament men's selections were being announced.

The Bulldogs haven't received an NCAA bid since 2015 and are coming off perhaps the worst season in school history.

They hope White can change that.

“We have witnessed Coach White to be a leader of men, as well as a proven winner with an impressive postseason body of work,” Georgia athletic director Josh Brooks said in a statement.

Florida finished .500 or better in conference games in each season under White, who guided the Gators to four NCAA Tournament appearances.

Taking over in Gainesville after Billy Donovan's 19-year tenure that included two national titles, White's most successful campaign was in 2016-17. Florida went 27-9 and reached the East Regional final before losing to fellow SEC school South Carolina, one win short of the Final Four.

The Gators failed to advance past the second round in their other three NCAA appearances under White, sparking a bit of discontent from a fan base that was used to far more success under Donovan.

“I believe in the limitless future of Georgia basketball," White said. ”I’m ready to get to work."

Just making the NCAA would be a huge step up for Georgia, which has reached the Big Dance only three times in the past 20 years — a lack of success that was only heightened by the Bulldogs winning the national title in football this past season.

Georgia's hoops team, on the other hand, went 6-26 this season — the most losses in school history. The Bulldogs went 1-17 in the SEC, the fewest conference wins in the post-World War II era.

Enter White, a Florida who played collegiately at another SEC school, Ole Miss, in the 1980s. His first priority is shoring up Georgia's dismal recruiting record in a state that has produced myriad stars for out-of-state programs.

“We want to compete for national success in all 21 of our sports,” Brooks said, “and we believe that he is the coach that can build Georgia basketball to a consistent winner on the collegiate basketball landscape.”

Florida’s hopes of improving its resume for NCAA Tournament consideration this season ended with an 83-80 overtime loss to Texas A&M in the SEC Tournament on Thursday.

Crean was fired that same day after the Bulldogs lost their final 12 games, including a 35-point rout by Vanderbilt in the opening round of the SEC Tournament.

Florida athletic director Scott Stricklin said he was told by White that he was taking another job Sunday afternoon.

“It’s been a pleasure having Mike, (his wife) Kira and the White family with us in Gainesville, and we wish them well,” Stricklin said. “They are a wonderful family who always represented the Gators in a first-class manner."

Stricklin said the search for Florida's next coach "has already begun, and I look forward to identifying a leader who will embody (the athletic department's) vision of providing a championship experience with integrity.”

Crean was 47-75 overall and 15-58 in SEC games over his four seasons. He was unable to duplicate the success he enjoyed at Marquette, where he advanced to the Final Four, or Indiana, where he coached three Sweet 16 teams.

Details of White's contract with Georgia were not immediately available. Before taking over at Florida, he went 101-40 in four seasons coaching Louisiana Tech.

The hiring of a coach from one of the Bulldogs' biggest SEC rivals was hardly expected.

When it became apparent late in the season that Crean's days were numbered, much of the speculation about his successor focused on former Georgia player Jonas Hayes, the associate head coach at Xavier.

But Brooks, in his first major hire since taking over the post last year when Greg McGarity retired, caught everyone off guard.

“We are thrilled to welcome a coach with Mike White’s integrity, character and competitive excellence," university President Jere Morehead said in a statement.

“He has been a leader throughout his extensive head coaching experience at Florida and Louisiana Tech, and we are confident that he will make a positive impact on UGA student-athletes and our campus community.”

AP Sports Writer Paul Newbery in Atlanta and Mark Long in Gainesville contributed to this report.