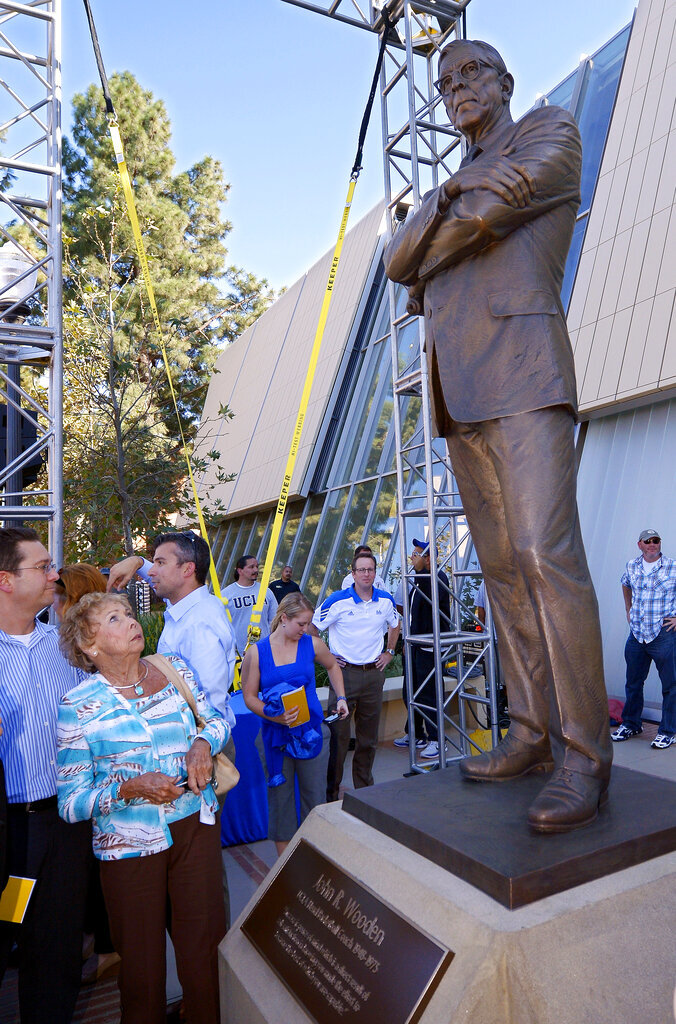 FILE - In this Oct. 26, 2012, file photo, Nan Wooden looks at a statue of her late father, UCLA men's basketball coach John Wooden, after its unveiling outside the new Pauley Pavilion at UCLA in Los Angeles. Nan Wooden died Tuesday, Sept. 14, 2021. She was 87. The school said she died of natural causes at a care facility in the San Fernando Valley, according to family members. She had suffered a series of strokes in recent years. (AP Photo/Mark J. Terrill, File) 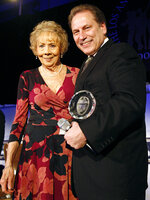 LOS ANGELES (AP) — Nan Wooden, the daughter of late UCLA basketball coach John Wooden and a fixture at the Bruins games for years, died Tuesday. She was 87.

The school said she died of natural causes at a care facility in the San Fernando Valley, according to family members. She had suffered a series of strokes in recent years.

Wooden continued to attend UCLA’s games long after her Hall of Fame father retired from coaching in 1975, when the Bruins won their 10th NCAA championship. She often sat in her father’s reserved seat at Pauley Pavilion, which served as a gathering point for extended family and friends. The court there is named for her parents.

She was a frequent companion of her father in his later years at UCLA's games, looking after him as he was besieged by fans for autographs and photos. John Wooden died in 2010 at age 99.

In 2012, Nan Wooden was on hand for the unveiling of an 8-foot bronze statue of her father outside Pauley Pavilion. The sculptor had consulted with her and other family members.

“I just wanted people to look at him and be able to say, ‘That’s John Wooden,'" she said. “I don't think there's any doubt.”

Born Nancy Anne Wooden in 1934 in Kentucky, she was raised in her father’s home state of Indiana. The family moved to Southern California in 1948, when her father took the UCLA job.

She is survived by her younger brother, Jim, and daughters Cathleen Trapani, Christy Impelman and Caryn Bernstein, as well as six grandchildren and four great-grandchildren. She was preceded in death by her husband, Richard Muehlhausen, and her mother, Nell.

“Nan was always so kind and extending to me,” UCLA women's basketball coach Cori Close tweeted. “She was also a spit fire just like her Mom. So sad she is gone.”

One of her grandsons, Tyler Trapani, played for the Bruins from 2008-12 and scored the final basket in a win against Arizona in the last game before Pauley Pavilion underwent a major renovation in 2011.