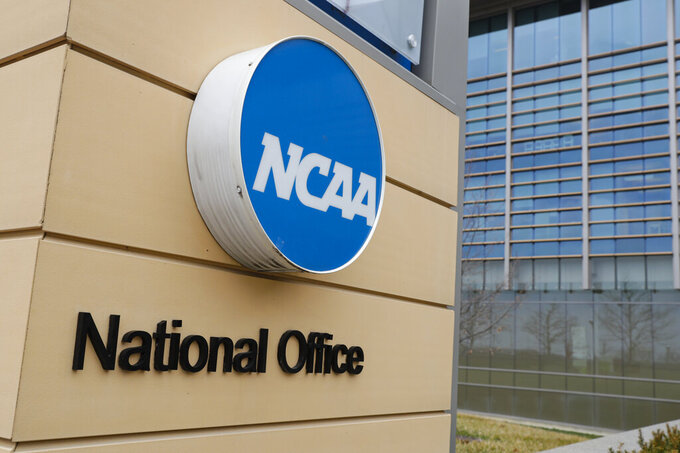 FILE - Signage at the headquarters of the NCAA is viewed in Indianapolis, March 12, 2020. NCAA member schools voted to ratify a new, pared-down constitution Thursday, Jan. 20, 2022, paving the way for a decentralized approach to governing college sports that will hand more power to schools and conferences. (AP Photo/Michael Conroy, File)

INDIANAPOLIS (AP) — The NCAA generated more than $1.15 billion in revenue in 2021, returning to normal after the cancellation of the men's basketball tournament because of the pandemic in 2020 cost the association and its member schools $800 million.

Most NCAA revenue comes from its contract with CBS and Turner for the rights to televise the men's Division I basketball tournament. That contract paid the NCAA $850 million in 2021 and is scheduled to pay $870 million in 2022.

The majority of the revenue is distributed back to its more than 1,200 member schools. The 350 Division I schools that can participate in the basketball tournament earn the bulk of it, mostly through shared payouts to conferences.

An insurance payout of $270 million in 2020 helped cover some of lost revenue from the canceled tournament. The NCAA received another $81 million in insurance to help make up for lost ticket revenue and expenses related to COVID-19 precautions for last season's tournament, which was played entirely in and around Indianapolis.