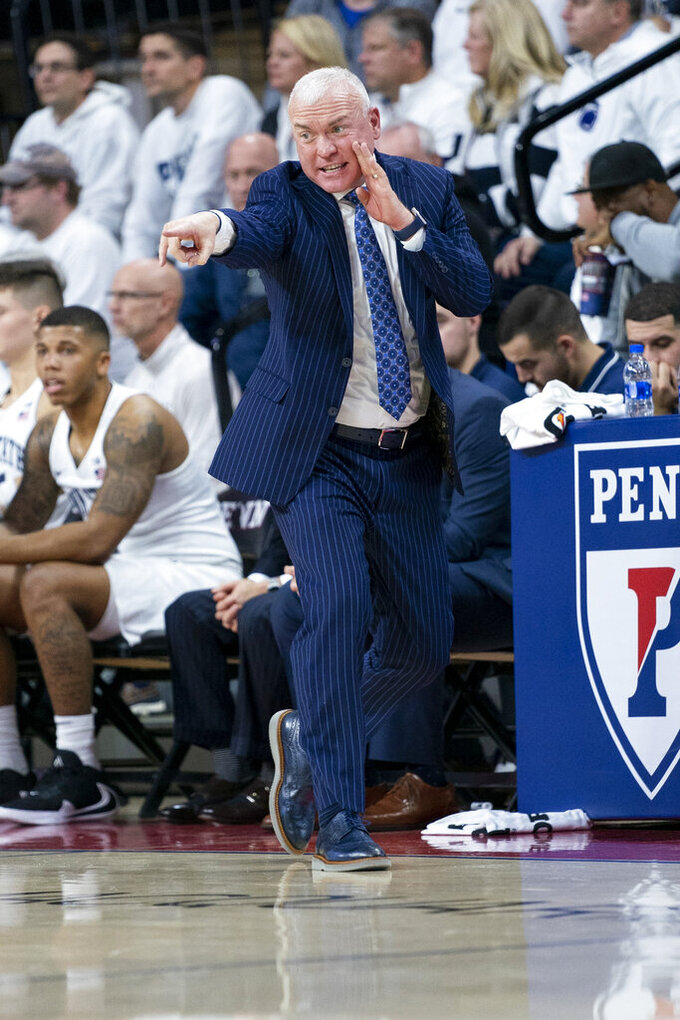 PHILADELPHIA (AP) — Lamar Stevens punctuated a late bucket that assured Penn State would leave the steamy Palestra triumphant with a yell of "This is my city!"

"It was just some emotions that came out," Stevens said.

No sense holding them in, not after a win that could propel the Nittany Lions toward their first NCAA Tournament in nine years. Stevens' face was on the big screen with the message, "Thank you, Philly!" The mascot was chest bumped by overzealous players. Coach Pat Chambers grabbed a mic and told the nearly 8,000 fans that packed the place that, yeah, football-crazed Penn State was a basketball school, too.

"My head is still spinning," Chambers said. "That was wild."

Izaiah Brockington scored 23 points and Mike Watkins' fast-break dunk with 1:42 left put No. 21 Penn State ahead to stay in a wild 89-86 win over No. 23 Iowa on Saturday at the Palestra.

Chambers might finally have a team he can take to the NCAA Tournament in his ninth season.

"Our vision has always been to be a Top 25 team, to find success and go to the NCAA Tournament consistently," Chambers said.

Those goals have been a chore at dreary Bryce Jordan Center, Penn State's on-campus arena that barely averaged an announced attendance of 10,000 fans last season. But 193 miles down the road at the Palestra, the heart of Philly hoops, the steamy gym was packed. Tickets on the secondary market were going for $150 a seat in the corners — or, "Corners! as its known when the Palestra is sold out — and fans arrived early to walk the concourse that serves as much as a hall of fame as it does a stop for a $4 hot dog.

The floor temps hovered in the 80s and industrial fans were needed to cool the players.

Iowa couldn't handle the heat down the stretch. Luka Garza scored 34 points for the Hawkeyes (10-4, 1-2 Big Ten), but he missed three crucial free throws in the waning moments.

Garza, who scored 44 points last month at Michigan, scored 12 straight points in one stretch in the first half but missed two foul shots with 3:21 left and Iowa clinging to a two-point lead.

Penn State supporters roared "We Are!" from the opening tip and the Palestra decibel meter hit 11 when Myreon Jones made a 3 for a late one-point lead. Garza went 1 of 2 from the line to even the score at 79-all. Watkins delivered for PSU with a go-ahead dunk before Stevens sealed it with a late layup — and his boasting howl.

Stevens and Jones each scored 16 points for the Nittany Lions (12-2, 2-1). Stevens sparked the idea of PSU making a return trip to Palestra. A graduate of Philadelphia's Roman Catholic High School, Stevens badgered Chambers about playing a game at the Palestra before his career ended. He surely could not have imagined a showdown between two nationally ranked teams going basket-for-basket in front of a packed house once Iowa agreed to play in Philly.

"Playing in high school is great, but it's nothing like coming back and playing in college," Stevens said. “It's just the environment and how loud the crowd gets. It's mainly only Penn State in the gym, cheering for us.”

Walk past the pictures of Kobe Bryant and Wilt Chamberlain in their high school uniforms, and there's a photo of McCaffery in his No. 23 Penn jersey. The caption read, "Fran McCafferty, 1979-82, was integral in three Ivy League Championship titles for the Quakers." McCaffery walked in the same concourse doors Saturday as fans and fist-bumped a row of black-and-gold wearing supporters. Yes, even an Ivy League school can't ace spelling — there's no T in McCaffery — and McCaffery left with another unwanted letter: an L.

"Everyone in the league is used to a hostile environment," McCaffery said. "Loud, road situations. I think what made today so difficult is the heat."

Iowa: The Hawkeyes can only hope the game won't cost them beyond the loss; starting guard CJ Fredrick left with an ankle or foot injury.

"They have many more guys that can score the ball, different pieces that bring something to the table," McCaffery said.