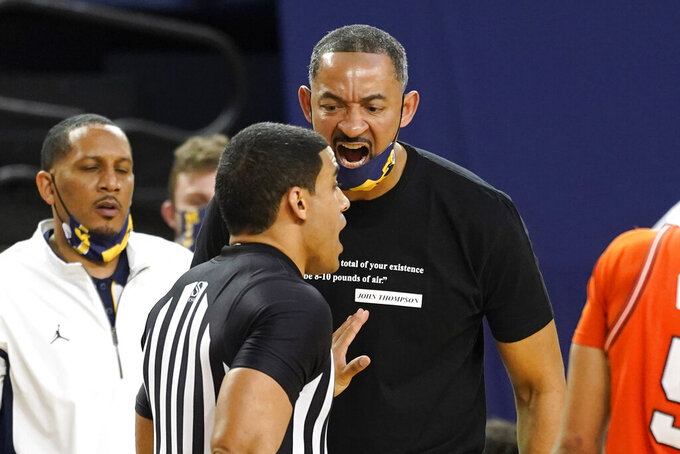 Michigan head coach Juwan Howard yells at a referee before receiving a technical foul in the second half of an NCAA college basketball game against Illinois in Ann Arbor, Mich., Tuesday, March 2, 2021. (AP Photo/Paul Sancya)

A look at the upcoming week around Big Ten basketball:

GAME OF THE WEEKEND: No. 2 Michigan and Michigan State will meet twice in four days, Thursday and Sunday. The rivals will close the regular season against each other with plenty at stake. The Wolverines are motivated to strengthen their case for a No. 1 seed in the NCAA Tournament. The Spartans have been in college basketball's showcase 22 times in a row and everyone in the program desperately wants to extend the streak. The first scheduled matchup in February was postponed and moved to Thursday night, two days after Michigan was routed 76-53 by No. 4 Illinois and Michigan State outlasted Indiana.

LOOKING AHEAD: The Big Ten Tournament, which was moved to Indianapolis from Chicago, begins on Wednesday. Michigan, Illinois, No. 5 Iowa, No. 7 Ohio State and No. 23 Purdue are in the mix to earn a double bye, allowing them to rest and prepare for the quarterfinals on Friday. No. 25 Wisconsin, Maryland, which received nine votes in Top 25 poll, and Rutgers will head to Indy playing to improve their seeding in the NCAA Tournament. The Spartans may need to win a game or two in the conference tournament to extend their season, while the slumping Hoosiers and Minnesota Golden Gophers probably need to make a deep run to earn an at-large bid.

PLAYER TO WATCH: Indiana's Trayce Jackson-Davis. The sophomore forward was held to a season-low nine points and matched a career low by making only one shot on five attempts in a 64-58 loss at Michigan State on Tuesday night. Jackson averages nearly 19-plus points a game and scored a career-high 34 points in the previous game against the Spartans. The Hoosiers hope he can bounce back on and off the court at a critical time for the program. Jackson was yelling at someone during a timeout in the second half at Michigan State. Embattled coach Archie Miller insisted he didn't remember the incident when asked about it following the setback. Miller's fourth team at Indiana has lost four in a row and five of six, pushing the program further away from earning an NCAA Tournament bid for the first time since 2016 under former coach Tom Crean.

INSIDE THE NUMBERS: The Big Ten has four teams ranked among the top 10 in The Associated Press poll and six overall. ... Iowa became the fourth team in the conference to be ranked in the top five. ... The Boilermakers, who host the reeling and rival Hoosiers on Saturday, are ranked for the first time in nearly a month. ... Ohio State coach Chris Holtmann and Michigan coach Juwan Howard are on the watch list for the Naismith Coach of the Year award. ... Howard heads into Thursday night's game against the Spartans with 23 Big Ten wins, the most by a coach in his first two seasons in the conference. ... A pair of players had notable, 40-point games last week. Marcus Carr scored 41 against Nebraska, the most points by a Minnesota player since 1972. Nebraska's Teddy Allen had 41 points against Penn State, the highest total in a Big Ten game in program history.

ON THE WOMEN’S SIDE: Iowa guard Caitlin Clark was named Big Ten Player and Freshman of the Week for the fifth time this season, breaking a conference record set by Amanda Zahui B. at Minnesota seven seasons ago. ... The Big Ten has six schools in the top 25 of the NET rankings and eight of the top 40. ... No. 24 Rutgers became the seventh team to be ranked in the AP Top 25 this season. ... The regular season wraps up on Saturday with the Terrapins hosting Penn State; No. 10 Indiana facing rival Purdue at home; No. 12 Michigan hosting Northwestern; Wisconsin visiting Michigan State and Nebraska traveling to Iowa. ... The Big Ten Tournament will begin Tuesday and end Saturday in Indianapolis.