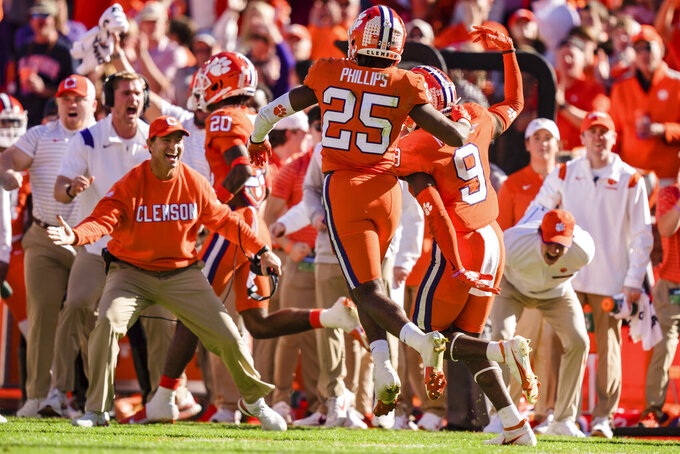 Clemson safety R.J. Mickens (9) celebrates after his interception with safety Jalyn Phillips (25) and head coach Dabo Swinney, left, in the first half of an NCAA college football game against South Carolina on Saturday, Nov. 26, 2022, in Clemson, S.C. (AP Photo/Jacob Kupferman)

CLEMSON, S.C. (AP) — Coaches across the country call for a “November to Remember.” Well, for No. 10 Clemson and No. 24 North Carolina, it's a month they'd rather forget.

Both entered November with hopes of making the College Football Playoff as long as they kept winning. Yet, the Tigers (10-2, 8-0 Atlantic Coast Conference) and Tar Heels (9-3, 6-2) both lost twice down the stretch to limp into the ACC Championship game on Saturday night.

“They're in the same boat, right,” Tigers defensive end K.J. Henry said of the Tar Heels. “So there's really no excuse of who can feel worse about themselves.”

Clemson was 8-0, ranked fourth and among the four teams in the CFP's initial poll heading into the month. But the Tigers lost their next game, 35-14, at unranked Notre Dame, then lost any playoff chance with a loss last Saturday to rival South Carolina, 31-30, after leading 30-21 late in the third quarter.

Tigers coach Dabo Swinney and his players were bothered by their play in those losses, but plan to get their focus back in a hurry with the ACC title at stake.

“We'll move on like we always have done. The last time we lost, we went back to work. This is what you do," Swinney said.

“You keep good perspective,” he continued.

Even when it's difficult to find a way forward.

North Carolina had little trouble winning for most of the season. The Tar Heels stood 9-1 and had clinched their first ACC Coastal Division since 2015. But North Carolina was stunned at home by Georgia Tech, 21-17 on Nov. 19 before falling in double overtime, 30-27, to rival North Carolina State, also at home.

“I’m not going to sit around and feel bad,” North Carolina coach Mack Brown said. "I’m not going to feel embarrassed for nine wins. I’ll give two teams credit that beat us at home at the end, which I’m disappointed in. ... But when your team plays as hard as they can play, that’s all you can ask them to do.”

And, maybe, to remember what's out there this weekend.

Clemson has won seven ACC crowns since 2011 with Swinney in charge. The Tigers missed the game last season after starting 4-3, ending a run of six straight league championships.

Orhorhoro recalls watching at home as Wake Forest and Pitt faced off for the league championship a year ago. It wasn't easy to sit through it, he said, “knowing we could've been in it if we had handled our business. It just gave me a deeper appreciation for Saturday.”

Brown, too, wants his players to embrace their chance at history — the Tar Heels last ACC crown came in 1980 — rather than their two-game losing streak.

“If you’d asked a North Carolina fan, or me, in August: would you take nine wins and a chance to play Clemson for the conference championship? We’d be so excited,” said Brown, who won the 2005 national title at Texas.

Henry said breaking down film after the South Carolina loss showed he and his teammates the truth of what went wrong after a couple of days of looking at rants of those on social media about the Tigers' problems.

“The only opinions that matter are the ones in this facility," Henry said. “And those are the ones that we can try to get better from.”

Clemson defensive coordinator Wes Goodwin said his players were upset at losing their seven-game win streak over the Gamecocks and their 40 straight victories at home, a run that began in November 2016. But they returned to the football complex on Sunday with their eyes on the the conference championship game.

“Seeing guys throughout the field, they know the challenge of the week,” Goodwin said. “Of being able to flush (the loss) and make things right this week.”