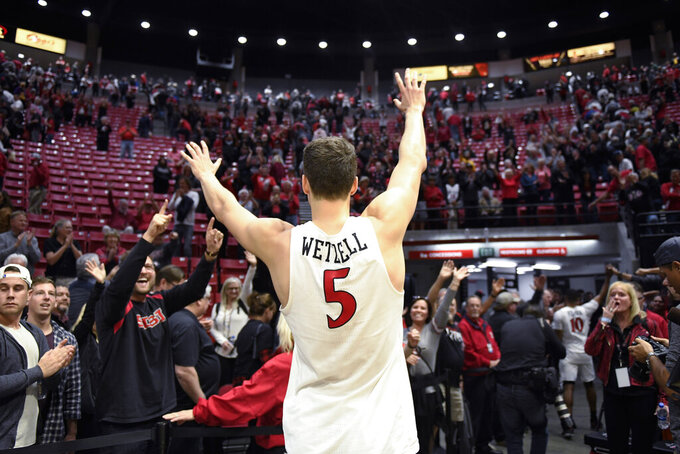 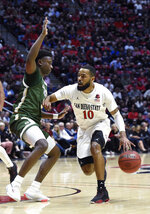 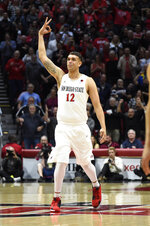 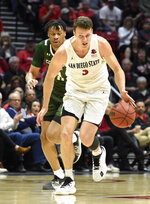 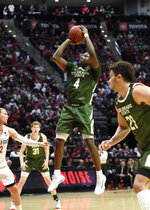 SAN DIEGO (AP) — Malachi Flynn and the No. 5 San Diego State Aztecs were out-of-sorts for the second straight game, with a second consecutive loss on their home floor appearing likely.

Then the Aztecs' rediscovered their lockdown defense and Flynn found his shot to provide a wild finish.

The junior transfer scored 10 of San Diego State’s last 17 points and the Aztecs rallied from a seven-point deficit to beat Colorado State 66-60 Tuesday night and rebound from their only loss.

Flynn finished with 17 points for SDSU (27-1, 16-1 Mountain West) after scoring just two points in the first half.

“I just think as a group. we don't want to lose," Flynn said. “We definitely didn't want to lose two in a row so we just buckled down on the defensive end, started getting stops and then people made shots."

“Malachi struggled today shooting, but then he ducked under a couple of screens," coach Brian Dutcher said. “He could have missed 12 shots but I knew he was going to take them at the end. He's wired like that. You have to have short memory in basketball."

“There are games where we're spectacular offensively, and those are the games we win by 10, 12 points," he said. “But these are the ones that matter there most, the ones where you're not at your best offensively but you find a way to win because the defense is so good. We played really elite defense in the second half."

“Obviously they are an elite defensive team. They really ramped up their defensive intensity and we kind of struggled to execute. We had a couple of key turnovers and they have shot-makers.

“I thought we did a nice job defensively and I think they numbers prove that out. But in that stretch we weren’t able to capitalize. We had a couple of good looks for good shooters that didn’t go in at the end.”

The Aztecs were out-of-sync for much of the game and once again took poor shots. But unlike Saturday night, when their furious rally fell short against UNLV, they were able to get the lead and keep it.

Carvacho made a layup and Kendle Moore two free throws to pull the Rams to 62-60. Mitchell missed a 3 and then Stevens missed a shot, with SDSU’s Yanni Wetzell tying up Carvacho, with SDSU getting the passion.

Mitchell and Flynn each made two free throws in the final nine seconds.

SDSU had been the nation’s last unbeaten team before its school-record 26-game winning streak was snapped in a 66-63 home loss to UNLV on Saturday night. The Aztecs had clinched the MWC regular-season title with four games to play.

The Rams came out fired up and surprised the Aztecs with a 12-0 run early in the first half to overcome a nine-point deficit and take a 14-11 lead.

SDSU seemed content to launch 3-pointers and not try to get inside, even when 6-foot-11 CSU center Nico Carvacho was out of the game. The Aztecs made only 6 of 17 from behind the arc in the first half.

The Aztecs pulled to 35-34 when Mitchell finally drove the lane and scored and was fouled, but he missed the free throw. Dischon Thomas made one of two free throws for the Rams to make it 36-34 at halftime.

Dutcher said the close games should help the Aztecs, who have been projected as the No. 1 seed in the East for the NCAA Tournament.

Colorado State: The Rams have rebounded nicely since losing their first three MWC games, including 79-57 against SDSU at Fort Collins on Dec. 4. They had won 10 of 13 coming into this game.