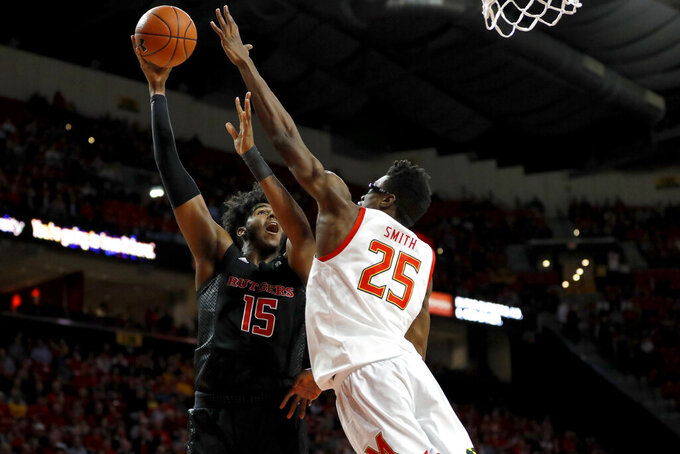 Rutgers center Myles Johnson (15) goes up for a shot against Maryland forward Jalen Smith (25) during the first half of an NCAA college basketball game Tuesday, Feb. 4, 2020, in College Park, Md. (AP Photo/Julio Cortez)

COLLEGE PARK, Md. (AP) — It was one of those nights when most of Maryland's shots were bouncing off the rim or spinning out of the basket. For several minutes at a time, the Terrapins went up and down the court without scoring a point.

Fortunately, No. 9 Maryland found a way to compensate for that shortcoming in a 56-51 victory over Rutgers on Tuesday night.

“We were terrific on defense," coach Mark Turgeon said. “We weren't at our best, but when we had to be we were good."

“Our defense was great and Stix had a lot to do with it," the coach said. “We really worked hard on defense the last two days because that's who we need to be."

Smith said: “I was just trying to block everything that went up. That's my normal stand, just playing defense and helping my team."

The Terrapins trailed 25-20 at halftime after shooting 24%. With Smith leading the way, Maryland emerged from the break with a 14-4 run and held off a late surge by the Scarlet Knights to improve to 13-0 at home.

“We had to have a good start in the second half and we did," Turgeon said. “We really guarded well in that stretch."

Three free throws by Cowan put the Terrapins up 52-49 with 2:12 to go. Myles Johnson answered with a dunk, but the Scarlet Knights did not score again.

“It's on me at the end of the game to make sure we get some better looks," coach Steve Pikiell said. “I've got to give (the Terps) a lot of credit. They make it hard. They've got a big-time shot blocker in the paint."

Smith, a 6-foot-10 sophomore, notched his fifth straight double-double. He had a 3-pointer and a three-point play in succession to put the Terps ahead 34-29, and the margin swelled to eight points before Rutgers (16-7, 7-5) rallied.

In the end, Maryland's defense was just too good.

“Defense is what fuels us," Smith said.

Akwasi Yeboah scored 13 for the Scarlet Knights, who shot 34% and went 3 for 17 from beyond the arc. Rutgers is 0-8 against Maryland since both teams joined the Big Ten in 2014.

Still, these aren't the same Scarlet Knights who won only nine conference games during their first four years in the Big Ten.

Maryland went 7 for 29 from the floor in the first half, made only two baskets over the final 12 minutes and fell behind at the break despite holding Rutgers without a point over the final 5 minutes.

Smith had eight points and five rebounds in the opening seven minutes to stake the Terrapins to a 14-6 lead. But Maryland missed 14 of its next 16 shots and went scoreless for more than 7 1/2 minutes while Rutgers went on a 19-4 run that included a trio of 3-pointers by Yeboah.

Rutgers played without guard Jacob Young, who was suspended by Pikiell following a driving while intoxicated arrest on Saturday.

Young is averaging 8.5 points per game. Pikiell said he would decide later if the suspension would extend beyond this game.

Rutgers: Even in defeat, Rutgers showed it's worthy of being mentioned in the same sentence as Maryland, Michigan State and all the other contenders. Finally, the rebuild is beginning to yield results.

Maryland: It's never easy for the Terrapins, even at home. This narrow victory shouldn't harm their place in the Top 10, as long as they back it up with a strong performance at Illinois on Friday night in a game between the Big Ten co-leaders.

Rutgers hosts Northwestern on Sunday night. The Wildcats lead the series 10-3 but Rutgers has won two of the last three.

Maryland's game at Illinois on Friday night is a rematch of a Dec. 7 contest won by the Terps 59-58.