COVID-19 pauses have teams working way back to 'game shape' 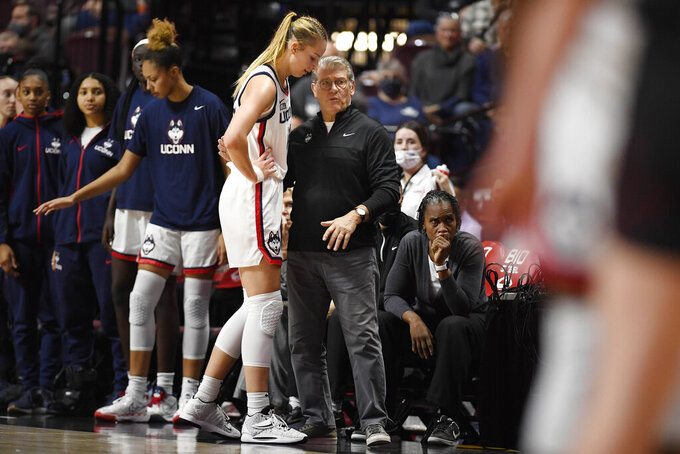 DURHAM, N.C. (AP) — When second-ranked Duke returned from a COVID-19 outbreak, it didn't take long for coach Mike Krzyzewski to see just how much work was ahead for the Blue Devils to get back into form.

“One of the kids, he was back for the first day" of practice, Krzyzewski said. “After 2 minutes, he threw up, and then he came back to practice and did well.”

It's a scene more common for the start of preseason training, not the middle of a schedule.

Yet it’s one of the challenges facing men’s and women’s basketball coaches across the country amid the growing number of postponements, cancellations and pauses.

After an abrupt halt to the schedule due to COVID-19 protocols, players face the arduous task of gradually getting back into game shape while avoiding injuries that come from pushing too hard to make up for lost time. Men's teams like the Blue Devils, fifth-ranked UCLA and Florida, along with the 11th-ranked UConn women are among those searching for that balance in returns this week.

“It’s definitely going to be a slow grind,” Duke wing Wendell Moore Jr. said. “I mean, because the place we were in before, it took months of preparation.”

As of Friday afternoon, more than 720 men’s and women’s games have been postponed or canceled through Monday because of COVID-19, the majority coming in the past three weeks. That has again thrown schedules into chaos and stalled gains from months of conditioning. And that only increases risks for pulled hamstrings, sprained ankles or more serious injuries as players try to rush back.

“The way I explain it to athletes is like a concussion protocol,” said Faustin, a three-sport college athlete who later worked with the U.S. women’s gymnastics team at the Tokyo Olympics. “We just don’t throw you back in. We need some time for your body to get used to what you’re doing.”

Then there are the challenges of getting athletes in top shape for competition, or “game shape."

“You’ve got to get back to your aerobic activity and resistance activities that you do and get your body and nervous system used to those movements again," said Geoffrey Martin Dreher, a sports medicine doctor and assistant professor of orthopaedic surgery at Johns Hopkins University School of Medicine.

Dreher, who also works as a team doctor for Johns Hopkins sports teams, added, "It’s that conditioning that might come back quickly. But then a lot of the abrupt change of movements you have and react to in a game setting can complicate things and make things a little bit difficult.”

That much has been evident for teams who had to put seasons on hold.

At Duke, the Blue Devils beat Virginia Tech on Dec. 22 only to have the outbreak lead to two postponements and send players into days of isolation.

“They gave us some resistance bands to try and keep our legs loose and stuff like that,” star freshman Paolo Banchero said. “Stretching. But in terms of running and keeping your wind up, there’s really not much.”

Duke won in its return Tuesday against Georgia Tech, though the Blue Devils shot a season-low 37.3% while grinding through fatigue to win. They host Miami on Saturday night.

At Florida, the Gators had a similar layoff until Wednesday’s loss to No. 15 Alabama.

“You’re dealing with illness, but you’re also dealing with some of these guys have gone seven, eight, nine days without even getting in a (defensive) stance … let alone (face) physicality from other people on the court,” coach Mike White said.

The Bruins offered an example of how tricky that can be, even for healthy players.

UCLA had three games canceled and two more postponed following a Dec. 11 win at Marquette, and didn’t play again until Thursday’s win against Long Beach State. Coach Mick Cronin said all but three scholarship players ended up with COVID-19, along with the coach himself.

Guard Johnny Juzang said he was one of the few who didn’t test positive and kept training.

“Christmas was my only off day, so I’m not adjusting as much,” Juzang said. “But you can still feel it in your legs a little bit not having played a real, live game.”

On the women’s side, the Huskies haven’t played since a Dec. 19 loss to Louisville when the team had eight players due to injury. Four players later tested positive for COVID-19, leaving the team unable to run 5-on-5 practice drills leading up to Sunday’s return against Creighton.

“It wasn’t until this week that we were able to add a seventh player and because of that you are obviously limited in what you can do and you are not quite sure as a coach what you should do,” said longtime Huskies coach Geno Auriemma, who also saw UConn's game at Villanova for Friday night postponed.