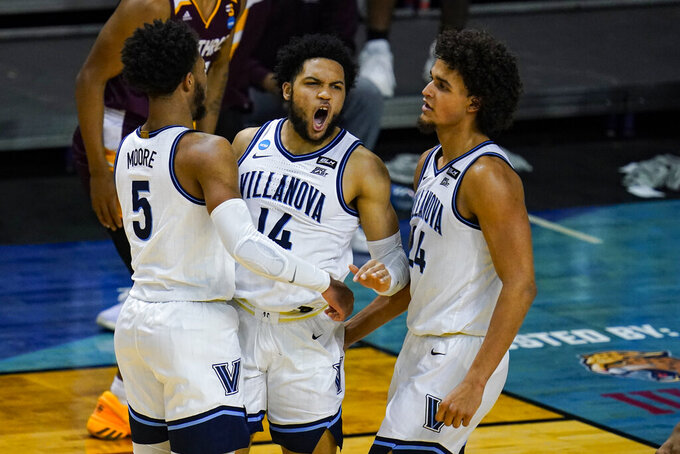 Villanova guard Caleb Daniels (14) celebrates a defensive stop with Justin Moore (5) and Jeremiah Robinson-Earl (24) in the second half of a first round game against Winthrop in the NCAA men's college basketball tournament at Farmers Coliseum in Indianapolis, Friday, March 19, 2021. (AP Photo/Michael Conroy)

INDIANAPOLIS (AP) — Villanova found a way to advance in the NCAA Tournament without Collin Gillespie.

Jeremiah Robinson-Earl had 22 points and 12 rebounds, and the fifth-seeded Wildcats pulled away in the second half for a 73-63 victory over 12th-seeded Winthrop in the South Region on Friday night.

Villanova (17-6) had lost both games since senior point guard and Big East co-player of the year Gillespie tore a ligament in his left knee during the Wildcats' victory over then-No. 14 Creighton on March 3. That made Winthrop, which came in with just one loss this season, a popular upset pick.

But Robinson-Earl — who shared Big East player of the year honors with Gillespie and Seton Hall senior forward Sandro Mamukelashvili in an historic three-way split — delivered when the Wildcats needed him, making four free throws that launched a 9-0 run to give Villanova its biggest lead at 60-47. The Wildcats will face 13th-seeded North Texas in the second round on Sunday. The Mean Green upset fourth-seeded Purdue in overtime earlier Friday.

Villanova coach Jay Wright said he knew Gillespie was watching back home in Philadelphia, and felt fortunate his teammates gave him something to cheer about.

“The other guys are stepping up,” Wright said. “This is a good team effort. This is a very, very good Winthrop team. We’re proud of this victory.”

D.J. Burns Jr. led Winthrop (23-2) with 12 points. The Eagles, who entered the game with seven consecutive victories, have not won an NCAA Tournament game since 2007.

Wright wondered about his team matching up with Big South Conference champion Winthrop, which prefers a quicker pace than the patient Wildcats. His concerns seemed understandable for a stretch as the Eagles made things interesting.

Villanova rolled out to a quick double-digit lead before Winthrop settled in and made it a 34-33 game at halftime. But the Wildcats returned from the break and locked down on Winthrop defensively, holding the Eagles to 28% shooting from the floor in the second half.

Winthrop edged Villanova 37-35 on the glass, but Robinson-Earl seemed to come up with the rebounds he needed on both ends. Muscling his way to the basket also created chances at the foul line, where he went 8 of 11.

March Madness means strange tipoff times, and this one started at 10:10 p.m. ET. Neither team seemed affected by the lateness, and their fan bases certainly kept things lively with surprisingly loud support throughout.

Both teams blocked eight shots. ... Winthrop's bench outscored Villanova's 18-15, and the Eagles won the battle in the paint 28-26.

Winthrop: The Eagles committed just 10 turnovers, but they ended up proving costly as Villanova converted them into 15 points. And while they played up-tempo for the most part, they struggled to slow the Wildcats when they went fast.

Villanova: Taken out of their comfort zone for a moment, the Wildcats regrouped and played their game. Moore's second game back since spraining his left ankle was critical as he drained a couple of 3-pointers, with Daniels, Cole Swinder and Bryan Antoine also contributing from deep. Villanova finished 8 of 25 from behind the arc.