Duke's Scheyer 'not afraid' of test as Coach K's successor 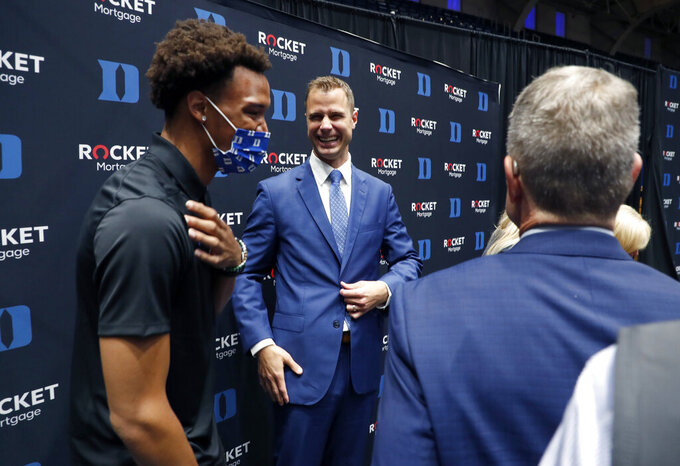 Jon Scheyer center, laughs while talking with Wendell Moore Jr. after an NCAA college basketball press conference at Cameron Indoor Stadium in Durham, N.C., Friday, June 4, 2021. Scheyer will spend the upcoming year in his role as associate head coach as coach Mike Krzyzewski chases one more championship in a Hall of Fame career. Then it’s up to the 33-year-old Scheyer to take over ahead of the 2022-23 season in the program’s first coaching change in more than four decades. (Ethan Hyman/The News & Observer via AP)

DURHAM, N.C. (AP) — Jon Scheyer remembers handling the pressure of playing for a national championship or in front of hostile crowds in high-profile games at Duke.

He confidently points to that history in his approach to managing an even bigger challenge: being the successor to Mike Krzyzewski.

“I've always been at my best when the crowd or the lights are its brightest, and it's no exception with this,” Scheyer said Friday in an interview with The Associated Press.

“I believe we can do an amazing job and figure out in a different way to be incredibly successful and carry this tradition forward. So call me whatever you want, but I'm not afraid of it.”

Scheyer will spend the upcoming year in his role as associate head coach as Krzyzewski chases one more championship in a Hall of Fame career. Then it’s up to the 33-year-old to take over ahead of the 2022-23 season in the program’s first coaching change in more than four decades

The school held a news conference formally introducing Scheyer as the designated coach-in-waiting. It took place a day after Krzyzewski’s event on the Cameron Indoor Stadium court bearing his name regarding his decision to step away next spring, setting up the handoff to a trusted former Blue Devils player and assistant as a first-time head coach.

Scheyer sat in a chair Thursday near the front during Krzyzewski’s news conference Thursday. A day later, the two had swapped seats, with Krzyzewski and his wife, Mickie, watching Scheyer field questions.

Beyond learning everything he could from his mentor, Scheyer told the AP he had spent time during the COVID-19 pandemic reaching out through Zoom calls with NBA coaches and leadership experts as ways to prepare for a moment like this.

“If I had it set in stone at 33, first-time head coach: 'here's exactly how we want to do it, and I'm not budging from it,' I think that would be foolish,” Scheyer said. “I think you have to be adaptable at this stage. I'm a lifelong learner. ... So I don't think I have all the answers. I know I'm going to lean on staff, I'm going to lean on others to figure out what the best solution is. And then ultimately, stand by the decision I make."

He's eager to make another run with Krzyzewski in what will likely be an emotional farewell tour of sorts for the Blue Devils — and one more chance to opposing fans to take a shot at beating the winningest coach in the history of Division I basketball. The clarity of knowing a timeline, too, offers Scheyer the chance to hone his plans for the personal touches he’ll want to add once he takes over.

Duke fans and opponents should expect similarities considering Scheyer played for Krzyzewski from 2006-10, with his last season resulting in his mentor’s fourth NCAA title. Scheyer joined the Duke staff for the 2013-14 season and was an assistant for Krzyzewski’s fifth NCAA title in 2015, and rose to his current role following the 2017-18 season.

Scheyer served as interim coach last year for Duke when Krzyzewski was sidelined for a January win against Boston College due to COVID-19 protocols. That game, Scheyer said, felt like he'd “been there for a long time” through years of preparation.

It'll soon be his time, and not just for a game or two.

“I've told myself, I'm going to be kind to myself,” Scheyer said. "I understand I'm not going to be perfect. I want to make 100% of the time the right decision. And unfortunately that doesn't happen. ... I think no one can predict the level of scrutiny.

"But again, it comes with the territory. That's part of competing for championships and being at a place like Duke where it comes with it.”