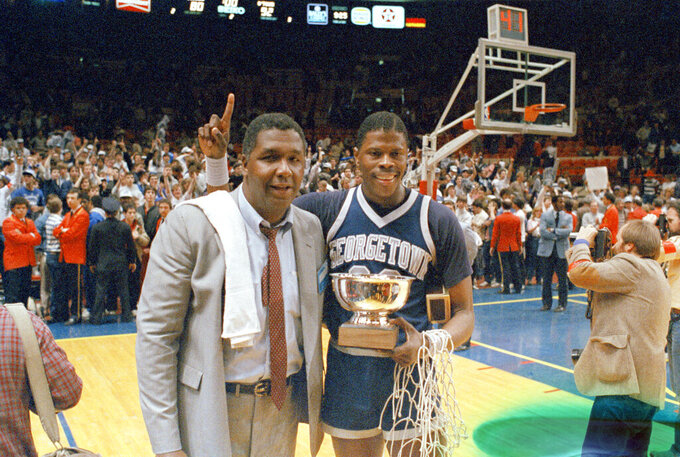 CORRECTS THAT THE GAME WAS AGAINST ST. JOHNS FOR THE BIG EAST CHAMPIONSHIP, NOT AGAINST HOUSTON FOR THE NCAA CHAMPIONSHIP - FILE - In this March 9, 1985, file photo, Georgetown NCAA college basketball head coach John Thompson poses with player Patrick Ewing after Georgetown defeated St. John's in the Big East Championship in New York. John Thompson, the imposing Hall of Famer who turned Georgetown into a “Hoya Paranoia” powerhouse and became the first Black coach to lead a team to the NCAA men’s basketball championship, has died. He was 78 His death was announced in a family statement Monday., Aug. 31, 2020. No details were disclosed.(AP Photo/File) 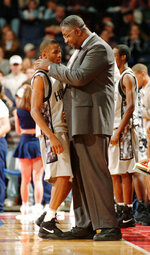 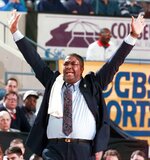 John Thompson opened the palm of one of his catcher’s mitt-sized hands and pointed to it with the index finger of the other. The lesson of hard work was never far from his mind.

“See this?” he asked. “I never saw my own father’s palms this … light. Never.

“I remember: He’d come home after work, wash ’em over and over, sit down at the dinner table and they always looked dark as this,” Thompson said, pointing now to the back of his hand. “After a while I figured out the stain of all that hard labor wasn’t ever going to wash away.”

This happened during a conversation about fathers and sons at an NCAA tournament East Regional final in March, 2007. It was long after a lifetime of work had secured Thompson, who died at age 78, his own place on Easy Street. He was almost two decades out of the coaching business by then and already inside the Hall of Fame. If basketball had a main boulevard, his accomplishments would have earned him a prominent spot on that street, too:

Hard work was the bedrock of all those achievements, but Thompson viewed it as just the ante for a seat at the table. To keep it, and change the game from the inside, he knew he’d have to win early and often, keep working just as hard and fight even harder. It’s tough in this fast-moving moment of reckoning to mark where many of the pioneers of the social-justice movement made their most important stand, but not with “Big John.”

He took tough stands on so many issues that the system wound up bending in his direction instead of the other way around. Like Congressman John Lewis, another social justice warrior who passed recently, he knew “good trouble” when he saw it and wasn’t afraid to wade in.

“I’ll never forget when Coach Thompson protested an NCAA rule that he felt discriminated against Black players by refusing to coach a game until it was changed,” Kentucky coach John Calipari recalled in a tweet. “He was ahead of his time by speaking truth to power when it was hard to do.”

Thompson grew up tall and talented in Washington, D.C., wooed by the same basketball establishment he would later occasionally seek to turn inside-out. His parents sacrificed plenty to send him to Catholic schools as a youngster, and after heading to Providence College, he saw first-hand how the major programs exploited Black athletes, many of whom arrived on campus without the solid educational foundation he had. Most left school not long after, with little more than they began. Changing that equation became the centerpiece of his life’s work.

After a brief stint with the Celtics, Thompson learned the trade during a half-dozen years as coach at St. Anthony High back in D.C. In 1972, he took over a Georgetown team that had gone 3-23 and had the Hoyas in the NCAA tournament in his third season. His teams posted a winning percentage of .714 over the next 27 years — including 24 postseason trips, three Final Fours and the 1984 title — but those numbers only hinted at the scope of his ambition.

Thompson challenged the fairness of standardized testing long before it was demonstrated and Proposition 42, a rule that barred freshmen from playing games if they failed to qualify academically, became a favorite target. He pulled his players off the floor in protest during one game and walked off the floor in the middle of another, turning his duties over to an assistant. He never apologized for any of it. Thompson railed against the criminal justice system, too, for its inherent bias against young Black men, then put an exclamation point to his words by handing Allen Iverson a scholarship to Georgetown — when no other school would touch him — after he was released from jail.

Iverson added a postscript on Twitter after news of Thompson’s death: “I will always see your face in my mind, hoping that I made you proud.”

Thompson took those tributes in stride, rarely letting his gruff exterior slip. But truth is, he wasn’t soft on anybody, including his family and himself. He made his players defend like their lives depended on it. He insisted every one of his players graduate, and 97 percent of them did. Thompson once confronted a well-known D.C. drug dealer for hanging around his players, and as the Washington Post put it “lit into him.” He even resigned as Georgetown’s coach in 1999, acknowledging that marital discord would prevent him from doing his job the right way.

But Thompson had mellowed some by the time of the 2007 conversation, in no small part because his son, John Thompson III, was on the verge of returning Georgetown to the Final Four for the first time since his father’s last appearance there in 1985.

And after the Hoyas beat North Carolina in overtime, the two reunited in the hallway heading out. Not surprising, the first thing the old man said wasn’t “Congratulations.” Instead, it was a reminder that tough times build character.

“You’ve been complaining about the bus being rickety,” Thompson scolded his namesake in that familiar booming baritone, then broke into a wide smile. “But the ride home is going to be good tonight.”