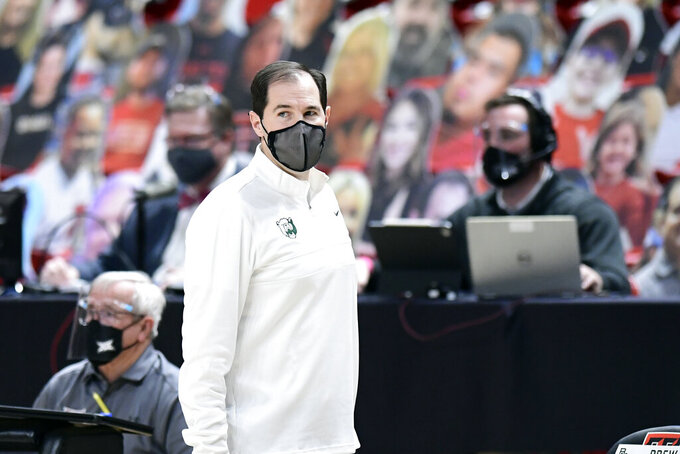 Baylor head coach Scott Drew watches from the sideline during the first half of an NCAA college basketball game against Texas Tech in Lubbock, Texas, Saturday, Jan. 16, 2021. (AP Photo/Justin Rex) 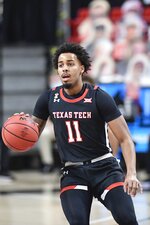 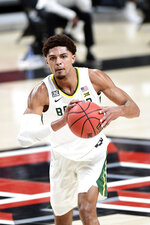 LUBBOCK, Texas (AP) — Davion Mitchell had 19 points and Jared Butler finally scored late as No. 2 Baylor overcame No. 15 Texas Tech 68-60 on Saturday to stay undefeated after their closest game this season.

Butler, the preseason AP All-American coming off a season-high 28 points in the last game, was 0-for-9 shooting with six turnovers before hitting consecutive 3-pointers for the Bears (12-0, 5-0 Big 12) in the final five minutes.

Mitchell hit a 3-pointer with 5:38 left to stretch Baylor's lead to 49-45 after the Red Raiders failed to score on a possession when they missed three consecutive putback chances. Butler scored all seven of his points after that.

Adam Flagler had 15 points and MaCio Teague 12 for the Bears, who had won each of their first 11 games by double digits — the closest had been an 11-point win at Iowa State on Jan. 2. It ended their school-record streak of 11 consecutive wins by at least 10 points.

Texas Tech had a 45-44 lead after Marcus Santos-Silva made a free throw with 7:14 left. The Bears went ahead to stay when Flagler penetrated and made a floater, almost falling down when the shot went in before Mitchell's 3.

Baylor's biggest lead in the first half was 19-10 with 8:53 left in the first half after Flagler and Mitchell had consecutive 3-pointers. The Red Raiders led 3-0 after Kyler Edwards' 3 a minute into the game, but they then missed seven shots in a row and went nearly eight minutes before scoring again.

The Red Raiders opened the second with a 19-8 run to erase an eight-point halftime deficit.

Baylor: The Bears played for the first time since a 67-49 win at TCU the previous Saturday. Their scheduled home game Tuesday was postponed because of COVID-19 issues in West Virginia's program. They never trailed by more than three points, but reached a double-digit lead only once — at 61-51 on two free throws by Mitchell with 2:51 left.

Baylor will be in the top five for a school-record 20th consecutive poll when the new AP Top 25 comes out Monday — the Bears had been in the the top five only 12 total polls before this streak. Texas Tech likely missed a chance for its highest ranking this season. The Red Raiders started the season No. 14, and No. 13 is their highest ranking so far.

Baylor is home against No. 6 Kansas on Monday night.