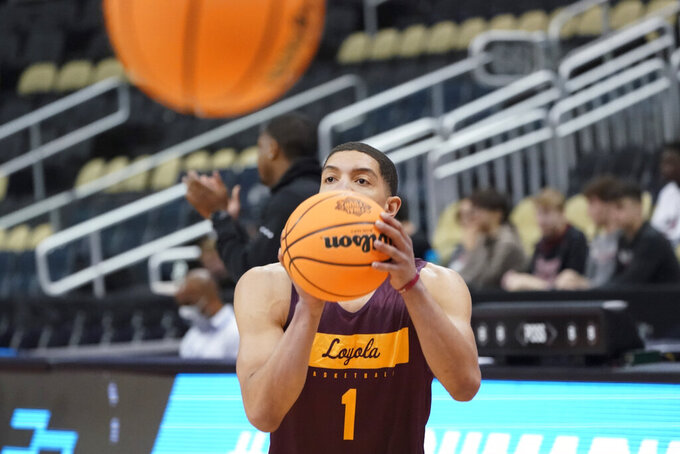 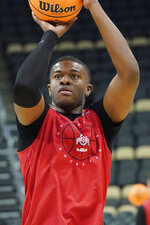 PITTSBURGH (AP) — The packaging is still there. On the surface anyway. Don't be fooled. The whole “Cinderella” thing surrounding Loyola Chicago no longer applies.

Yes, the enduring symbol for the Jesuit school located hard against Lake Michigan in Chicago's Rogers Park neighborhood remains Sister Jean, the centenarian nun and team chaplain who became a folk hero during the school's stunning run to the Final Four in 2018.

And yes, the players she mentors remain perfectly fine with that arrangement.

“We always kind of joke around when we advance it’s kind of like 'Sister Jean advancing to the round of 32,” junior guard Braden Norris said with a laugh.

Yet while the now 102-year-old Sister Jean will be at PPG Paints Arena on Friday when 10th-seeded Loyola (25-7) faces seventh-seeded Ohio State (19-11) in the first round of the NCAA Tournament's South Region on Friday, her beatific smile belies a team that is no longer the plucky, seemingly harmless, bracket-busting upstart.

If anything, Loyola seems to be following in the footsteps of Gonzaga and Butler, private schools from conferences far outside the Power Five who have elbowed their way to national relevance and in the top overall-seeded Bulldogs, prominence. Gonzaga did it in the 1990s. Butler with consecutive national title game appearances a decade ago.

Now, it may be Loyola's turn.

“That’s definitely the path,” head coach Drew Valentine said Thursday. “That’s what our administration has given us the support to do.”

The Ramblers are certainly hitting all the benchmarks.

Like both Butler and Gonzaga, they've reached the Final Four. Like both programs, they've had success with multiple coaches after the 30-year-old Valentine moved one seat over to replace Porter Moser and guided Loyola to a Missouri Valley Conference title.

And like Butler, they've parlayed their newfound swag into a step up the food chain. Loyola is leaving the Missouri Valley Conference for the Atlantic-10 next fall just as Butler bounced from the Horizon League to the A-10 to the Big East in just three years.

Ohio State coach Chris Holtmann, who guided Butler to three straight NCAA appearances from 2015-17 before moving on to the Buckeyes, said there are “great similarities” to what Loyola is doing now compared to what Butler has done over the last three decades.

“It’s not like they’re a ‘mid-major,’” Holtmann said. “They’re a great program that has had a ton of NCAA Tournament success. Yeah, I mean, it’s one of those really elite programs in the country, and they’ve earned that.”

Valentine points to his team's roster as proof. The recruiting calls that would have been ignored five years are getting answered. As much as Valentine adores the 2018 group, the team that will take the floor against the Buckeyes is probably more talented top to bottom.

It's all part of the process.

“I love those guys to death, love them to death, but it’s just at a different level right now,” Valentine said. “Hopefully five years from now (it's even higher). ... I think we’ve got an NBA player on our team right now, but hopefully we’ve got multiple NBA guys and it’s trending. Because when you have the combination of winning and pros, that’s when you start elevating the program. We’ve got the winning down.”

They also have Ohio State's — and everyone else's — attention too. Loyola is a one-point favorite over the injury-depleted Buckeyes. The status of Ohio State forwards Kyle Young (concussion) and Zed Key (ankle) is uncertain.

The Ramblers' status as a program that's no longer an anomaly but a March fixture is not.

Tommy Lloyd was used to having tournament-tested teams when he was an assistant at Gonzaga under Mark Few. He doesn’t have that same luxury in his first year as Arizona’s coach.

The South Region's top seed returns to March Madness for the first time since 2018 when it faces Wright State Friday in San Diego. Guard Oumar Ballo, who played at Gonzaga last season before transferring, is the only player on the roster who has played in the NCAA Tournament.

“Maybe there’s a benefit,” Lloyd said. “I know Steve Kerr and I were having a conversation a while back. He was telling me how cool it is to go through it the first time. For him when they made that run to the NBA Finals the first year, he just told me, there’s a beautiful innocence about it because you haven’t been institutionalized yet.

“So maybe that goes for me and the team, where we’ve got kind of an ignorance-is-bliss type of approach and we’ll go out, be in attack mode because that’s the way we’ve played all year.”

Guard Bennedict Mathurin, the Pac-12 player of the year, said the main thing Lloyd has been stressing this week is to continue to stick to the same formula they used during the regular season.

“Yes, it’s the experience thing, but we all played basketball games before,” guard Dalen Terry said. “We’ll not looking at this as anything bigger than that. One basketball game at a time. Act like we’ve been here before.”

Houston will be attempting the near-impossible: putting together back-to-back Final Four appearances with an entirely new starting five.

The group that led the Cougars to the national semifinals last spring is gone. In their place are transfers Josh Carlton, Taze Moore and Kyler Edwards as well as Jamal Shead and Fabian White, reserves last season. Carlton stressed there’s a difference between “new” and inexperienced.

No school means more to Delaware coach Martin Ingelsby than Villanova. That loyalty will be put on hold for a few hours Friday.

Ingelsby, who could be considered ’Nova basketball royalty with his deep connections to the university, will lead his Blue Hens against the Wildcats.

Ingelsby’s father, Tom, was a star at Villanova and his No. 24 hangs in the rafters at Finneran Pavilion on campus. Both of Ingelsby’s brothers are Villanova graduates and he’s raising his kids to pull for the Wildcats, at least when they’re not facing their dad.

Jamie Dixon played for TCU the last time it won a game in the NCAA Tournament. In his sixth year coaching his alma mater, Dixon is looking to lead the ninth-seeded Horned Frogs to a victory over eighth-seeded Seton Hall.

Dixon was a senior in 1987 when TCU beat Marshall 76-60 in the first round. Dixon’s last game as a college player was in the second round, when Notre Dame won 58-57.

“Our history is not great but we’re changing that," Dixon said. "And I guess it gets referred to more because we hadn’t won many games in the NCAA Tournament. As a player, I was probably a coach in the making. So, it sticks a little longer, yeah, no question.”

Chattanooga coach Lamont Paris knows he doesn't have any one player that can defend 7-foot Illinois center Kofi Cockburn. So Paris isn't even going to try.

While Kansas transfer Silvio De Sousa will surely get a shot at Cockburn, he'll be one of many bodies the Mocs try to throw at one of the best big men in the country.