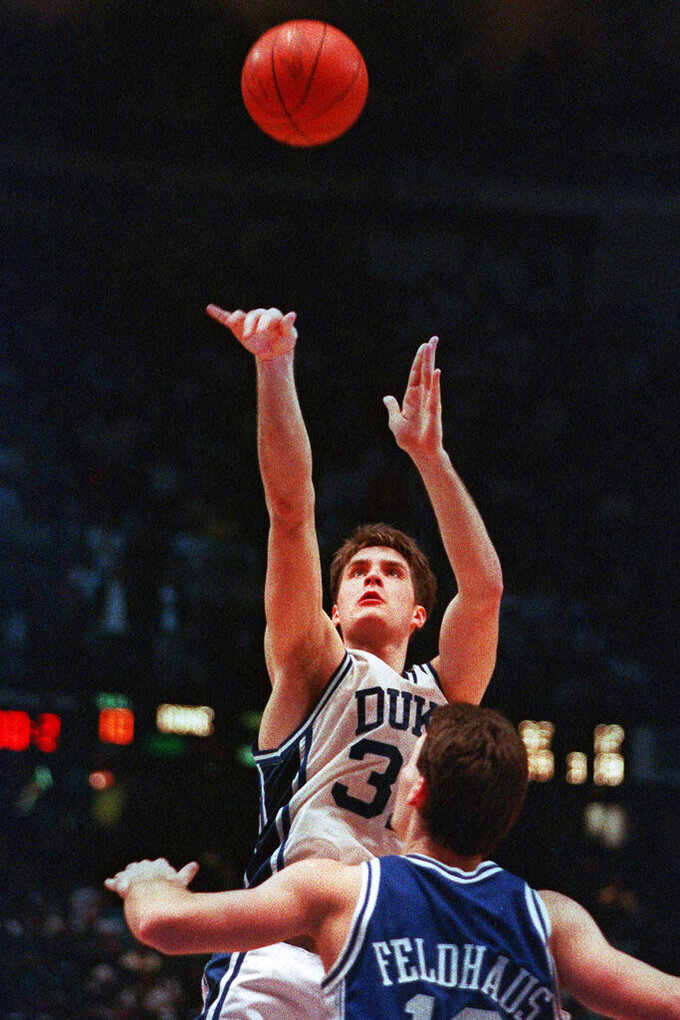 FILE - In this March 28, 1992, file photo, Duke's Christian Laettner takes the winning shot in overtime over Kentucky's Deron Feldhaus for a 104-103 victory in the East Regional final NCAA college basketball game in Philadelphia. A panel of Associated Press sports writers voted in March 2020 on the top 10 men's basketball games in the history of the NCAA Tournament. They are being republished because the sport has been shut down because of the coronavirus pandemic. The Duke vs Kentucky game on March 28, 1992, was voted No. 2. (AP Photo/Charles Arbogast, File) 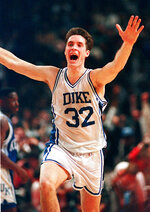 A panel of Associated Press sports writers voted in March 2020 on the top 10 men's basketball games in the history of the NCAA Tournament. They are being republished because the sport has been shut down because of the coronavirus pandemic. The Duke-Kentucky game on March 28, 1992, was voted No. 2 and the following story was sent that night.

PHILADELPHIA (AP) — Christian Laettner has made the shots of two lifetimes.

The All-American ended one of the greatest college basketball games ever with a turnaround jumper at the overtime buzzer, giving defending national champion Duke a 104-103 victory over Kentucky and a fifth straight trip to the Final Four. It was the second time that Laettner had made a last-second shot in overtime to send Duke to the Final Four.

“I can't believe it happened to me twice in a career,” Laettner yelled as he was pounded by teammates and fans.

“We beat a very determined and great basketball team,” Duke coach Mike Krzyzewski said. “It was an unbelievable game where kids made great plays.”

The victory means a fourth Final Four appearance in as many years for Laettner and fellow senior Brian Davis. It means the top-ranked Blue Devils, who now face Indiana, a 106-79 winner over UCLA on Saturday, have a chance to become the first repeat national champions in 19 years.

And it also means Laettner has earned a niche in history as the man who hits the biggest of the big shots.

“ It was a designed play. We had a few different options, but I was the first option,” Laettner said, sounding as if he were describing a shot during any regular-season game.

Maybe it does come easy for the 6-foot-11 center who beat Connecticut in 1990 with a jumper at the buzzer on an inbounds play that also gave the Blue Devils a regional championship. He is also the NCAA Tournament's career scoring leader, as his 10th point of the game was the 359th of his career to surpass Elvin Hayes of Houston.

Duke (31-2) had the ball and a one-point deficit with 2.1 seconds left. Sean Woods had given Kentucky a 103-102 lead with 2.5 seconds left on a one-handed drive he banked in from just inside the foul line.

He took a length-of-the-court pass from Grant Hill, faked right, spun to his left, and his 15-footer hit nothing but net as the Spectrum exploded with joy and relief as the game ended.

“I was just trying to catch the ball,” said Laettner, who didn't didn't miss a shot — 10 from the field, 10 from the free throw line — and finished with 31 points. “This seemed to take a lot longer than the Connecticut shot. After I shot it, I didn't see it go in, but I knew it did. There can't be a better feeling than this.”

Duke's Final Four run seemed at an end against team that hadn't been to the NCAA Tournament for three years, the last two because of probation. The Wildcats (29-7) had played the best game of a season few had expected three years ago when Rick Pitino took over the program.

“I told the guys, `Don't let two seconds determine your basketball life because it's worth a lot more than that,'" Pitino said. "He made a great shot with a man on him. Two seconds is a long time. But he's a great player, and he made the shot so we have to give him credit."

Woods' shot was the fourth lead change in the final 30 seconds. It had seemed to be one of the best ever made to win a regional championship — until Laettner's.

“We were probably a little disappointed, As lucky as my shot was, he made an incredible shot because he shot it over Bobby (Hurley) and me,” Laettner said. “Obviously, it would have been disappointing not to go back to the Final Four. We just feel very lucky and very happy we're able to go to Minneapolis.”

Duke has looked to be taking Easy Street to the Twin Cities when the Blue Devils took a 79-69 lead with 7:40 left on two free throws by Laettner.

However, things unraveled quickly for the team that never gets rattled.

Laettner had been assessed a technical foul just 26 seconds earlier for stepping on Aminu Timberlake when the Kentucky freshman had submarined the All-American on a drive to the basket.

“It's just a case where I was a little off-balance, Laettner said. ”The kid was underneath me. I didn't even hit him hard. I didn't mean it."

Kentucky turned on its vaunted press, which it had avoided most of the night in favor of a 2-3 zone, and it created turnovers as it had all season.

The Wildcats went on a 12-2 run over the next 2:01, and suddenly thoughts of great upsets filled the heads of everyone in the building. Woods hit a 3-pointer with 5:28 left to tie the game 81-81, and neither team led by more than three points the rest of the way.

“When you make a mistake you don't think you'll be punished for it every time, but we were,” Laettner said of Kentucky's game-tying run.

The intensity was there, even if the style of play people have come to expect from Duke wasn't.

Deron Feldhaus, one of four Kentucky seniors who stayed in the program rather than leave when the probation was announced, tied the game 93-93 with 38 seconds left in regulation on a rebound.

Duke ran the clock down without calling a timeout, but Hurley's jumper with four seconds left missed.