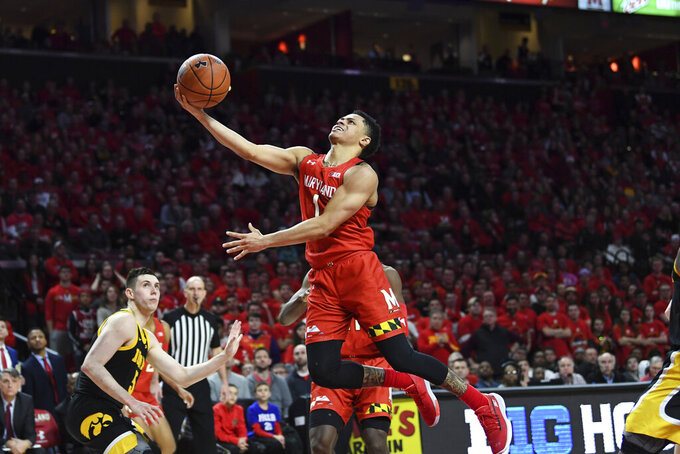 Maryland guard Anthony Cowan Jr. (1) goes to the basket for a layup during the second half of the team's NCAA college basketball game against Iowa on Thursday, Jan. 30, 2020, in College Park, Md. (AP Photo/Terrance Williams)

COLLEGE PARK, Md. (AP) — Anthony Cowan Jr. scored, more than ever before. The senior guard also passed, played tight defense and even did a little coaching.

With Cowan leading the way, 15th-ranked Maryland beat No. 18 Iowa 82-72 Thursday night to remain unbeaten at home and in the thick of the race for first place in the Big Ten.

Cowan scored a career-high 31 points to move past Walt Williams into 12th place on the Maryland scoring list with 1,716. Cowan went 9 for 15 from the floor, 10 for 11 at the foul line, led the Terps with six assists, grabbed six rebounds and had a steal and a block.

Jalen Smith had 18 points and 14 rebounds to help the Terrapins win their fourth straight and snap the Hawkeyes' five-game run.

Maryland (17-4, 7-3) never trailed after halftime in the rematch of a Jan. 10 meeting that Iowa won 67-49 to launch its winning streak. Cowan scored 9 points on 2-for-10 shooting in that first game, but in this one he was a difference-maker.

“They sat in the zone, so I just had to get aggressive," he said. “Last game we played them there, we just wasn't aggressive with the zone. So that's what I made sure I did."

Luka Garza scored 21 for the Hawkeyes (15-6, 6-4) and Joe Wieskamp had 17. Garza, the Big Ten's leading scorer, was in foul trouble throughout. He had two fouls in the opening five minutes and picked up his fourth with 7:55 remaining.

“We're a different team with Luka. The more he's out there, the better we are," coach Fran McCaffery said. “That kind of changes everything. Others have to step up."

Maryland led 52-49 before a dunk by Smith, 3-pointers by Eric Ayala and Aaron Wiggins, plus two free throws by Cowan upped the margin to 13 points with 6:17 to go.

Although the Hawkeyes were coming off a spirited comeback win over Wisconsin, there would be no rally in this one.

Cowan made sure of that.

“It's all about winning for Anthony this year," Turgeon said. “What's amazing about what he's doing, he's helping me coach the team when we're not boxing out and not communicating. He was screaming at them pretty good with three minutes to go. When I walked into the huddle, he was on them pretty good."

Early on, Iowa looked sharp. The Hawkeyes made four of their first six attempts from beyond the arc and built an 18-12 lead.

Garza scored only six points before halftime on 3-for-6 shooting. He finished 9 for 19.

Iowa: The Hawkeyes can't be too disappointed, given that no one has come to Maryland this season and gone away with a victory. Iowa might have fared better if Garza was on the court for more than 25 minutes. “He's pretty good, typically, at staying vertical and staying out of foul trouble, recognizing how important he is to our team and staying on the floor," McCaffery said. “He's an aggressive guy so obviously sometimes it's going to happen."

Maryland: This is a big win for the Terrapins, who appear to have righted themselves after successive losses to Wisconsin and Iowa two weeks ago.

Maryland asked the crowd for a moment of silence before the game to honor the lives of DeMatha basketball coach Morgan Wootten (who died last week), former Lakers star Kobe Bryant, his daughter Gianna and the seven others who died in a helicopter crash in California on Sunday.

Iowa hosts No. 19 Illinois on Sunday, the first of two meetings between the Big Ten contenders.

Maryland is at home Tuesday night against surprising 25th-ranked Rutgers, which hasn't beaten the Terps since both teams joined the Big Ten in 2014.