Escobar hits for cycle, has 6 RBIs as Mets beat Padres 11-5 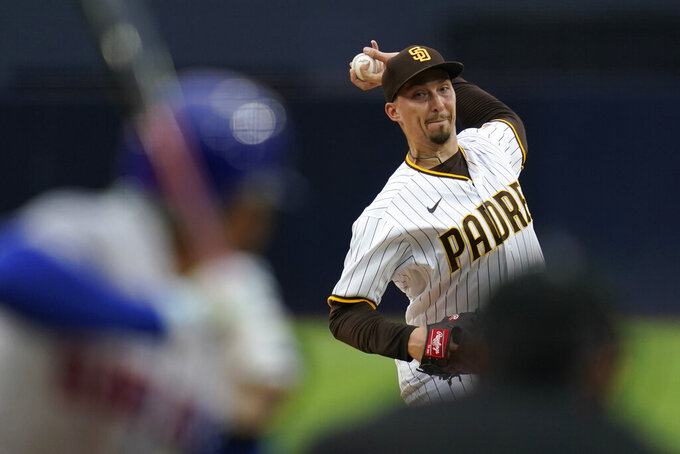 SAN DIEGO (AP) — Eduardo Escobar knew he needed a triple to complete his first cycle and he was going to do whatever it took to get it.

Sure enough, he did.

Escobar hit a two-run triple with two outs in the ninth inning, giving him six RBIs in boosting Carlos Carrasco and the New York Mets to an 11-5 win Monday night against the San Diego Padres.

The switch-hitter sent an opposite-field drive off lefty reliever Tim Hill over the head of right fielder Nomar Mazara and off the wall. Escobar sped around the bases and pulled into third in front of his cheering teammates lining the dugout rail. He pumped his right arm, clapped his hands and blew a kiss skyward.

“This is a great moment. It's unbelievable,” the 33-year-old third baseman said. "It's hard hitting the cycle at this level. Today's a special night for me. Most important is the win.”

The ball from the triple was perched in his locker.

Escobar came in batting just .227 but has three homers and 12 RBIs in his last nine games.

He credited hitting coach Eric Chavez and his teammates, “to everybody who helped me.” He said his teammates encouraged him to keep working hard “because your moment's coming. ... I'm so happy I started hitting now and now I help the team win. That's the most important.”

Escobar hit a two-run moonshot homer that sailed well over the party deck atop the right field wall off Craig Stammen with no outs in the eighth. It was his fifth.

Escobar also hit a two-run single in the first and a double in the fourth.

It was the 11th cycle in Mets history and the first since Scott Hairston on April 27, 2012.

It was also the first cycle at Petco Park, which opened in 2004.

“Any guy is fun to watch, especially him, what he means to his teammates,” New York manager Buck Showalter said. “It's almost like they hit it.”

The Mets, an NL-best 38-19, won their third straight and for the ninth time in 11 games. The Padres, who have the NL's third-best record at 33-22, had their three-game winning streak snapped.

Carrasco (7-1) won his fourth straight start by holding the Padres to two runs and five hits in seven innings while striking out a season-high 10 and walking none. He limited the damage to two innings. Jorge Alfaro doubled leading off the third and scored on Jurickson Profar's one-out single. Kim Ha-seong singled with two outs in the seventh and scored on Mazara's double.

“Carrasco was the story of the game, I thought,” Showalter said. “He was sharp. Big out, the last one."

Carrasco ended his night by striking out Alfaro with a runner on second.

“He was able to kind of get our bullpen back on their feet a little bit,” Showalter said.

The Mets tagged Blake Snell (0-3) for three runs in a plodding first inning that took 27 minutes while the left-hander threw 43 pitches. He allowed Starling Marte's one-out single, struck out Francisco Lindor and then issued three straight walks to force in a run. Escobar followed with a two-run single.

The Padres had Nabil Crismatt warming in the bullpen before Snell retired Jeff McNeil.

Escobar doubled leading off the fourth and scored on Brandon Nimmo's two-out single. J.D. Davis hit a sacrifice fly in the sixth.

Luke Voit hit a three-run homer for San Diego off Drew Smith with two outs in the eighth, his fifth. The ball bounced off the top off the wall in left-center and back onto the filed, and Voit paused at second. After an umpire review, it was ruled a homer.

Former Michigan and San Diego State basketball coach Steve Fisher threw out the ceremonial first pitch on behalf of the ALS Association. His son, Mark, was diagnosed with ALS several years ago and continues to work as an assistant hoops coach at SDSU. ... Tennis great “Rocket” Rod Laver and Fred Lynn, the 1975 AL MVP and Rookie of the Year, chatted up Padres manager Bob Melvin before the game and then shared a laugh with Fisher. Laver, Lynn and Fisher all live in northern San Diego County.

Padres: SS Fernando Tatis Jr. is due to have another bone scan later this week on his surgically repaired left wrist, Melvin said. The Padres want to see enough improvement in the wrist before letting Tatis swing a bat. He has been running, taking grounders and throwing. He broke his wrist in the offseason, reportedly in a motorcycle accident in his native Dominican Republic.