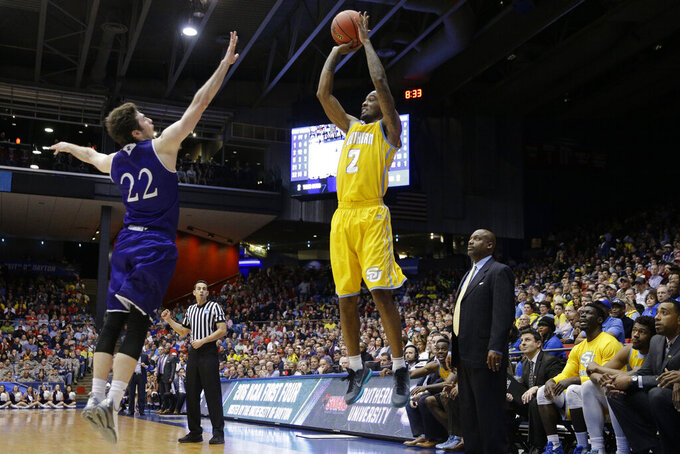 FILE - In this March 16, 2016, file photo, Southern University's Adrian Rodgers (2) shoots over Holy Cross' Robert Champion (22) during the second half of a First Four game of the NCAA college basketball tournament, in Dayton, Ohio. University of Dayton basketball has attracted great crowds since the 1950s, and the school perennially ranks in the top 25 in the nation in average attendance. (AP Photo/John Minchillo, File)

DAYTON, Ohio (AP) — When Texas Southern and North Carolina Central tipped off on the second night of last year's First Four, the University of Dayton Arena next to Interstate 75 was still filling up with 12,732 spectators, the largest crowd in the eight-year history of the NCAA Tournament play-in affair.

The arena had "March Madness" logos on the polished court, national TV, blaring pep bands and a giant American flag unfurled by members of the military stationed at nearby Wright-Patterson Air Force Base for an undercard of teams from small, historically black colleges — one of them with a losing record — that rarely see this kind of hoopla. The place crackled with the energy of an important event.

"First class," was how Mike Davis put it. Davis took Texas Southern to the First Four in 2014 and 2018 before moving on to coach at Detroit Mercy.

"At Texas Southern, instead of being a 16th seed, I'd rather be in the First Four every year," he said. "You get there and they meet you at the hotel, they have a band playing, they have refreshments for you. Even when you leave, they treat you great."

The event, which takes place Tuesday and Wednesday, assures the city and the university a slice of the NCAA Tournament pie every year, at least through 2022 when the current contract expires.

Dayton is the only city to host play-in games since the NCAA introduced the concept in 2001. And with growing competition around the country to host lucrative NCAA events, the university and community want to hang onto the First Four. The private school is finishing $72 million of upgrades at the 50-year-old arena this year, just in time for the beginning of the bid process for the next four-year contract. Last time, Dayton was chosen over Detroit and Evansville, Indiana.

"It's going to be hard to beat them," acknowledged the NCAA's David Worlock. "They are very good at it."

Part of the reason is location.

At the interchange of two major highways — I-70 and I-75 — and with a good-sized airport, Dayton is easy to get to and situated within 600 miles of half the country's population. Worlock, the media coordinator for March Madness, said that's critical to the NCAA, which has to start arranging transportation and hotel rooms for the teams immediately after brackets are announced on Sunday.

And people who live here turn out for the games, no matter who's playing.

"They may pick a side sometimes, but they really cheer for both teams," Davis said. "It's a classy, classy crowd."

University of Dayton basketball has attracted keen crowds since the 1950s, and the school perennially ranks in the top 25 in the nation in average home attendance. The Dayton broadcast market is the 64th largest in the country but is a top 10 market for college basketball on TV.

An international spotlight shone on the building in 2012 when President Barack Obama decided to bring then-British Prime Minister David Cameron to the opening night of the First Four.

For a metro area of around 800,000 often overshadowed by nearby Columbus and Cincinnati, the First Four is one of the most important events of the year for exposure and tourism revenue. Dayton officials say the local economy benefits from $4.5 million in direct spending every year. It's also become an economic development tool, with officials wining and dining business clients and corporate site selectors at the games.

"To really have a focus on an event of this scale that comes to Dayton, Ohio, is something that's very, very important to us," said Jacquelyn Powell of the convention and visitors bureau. "NCAA men's basketball is one of the world's most-watched sporting events, and the fact that the First Four is held here every year is something we are extremely proud of."

Looking for a Cinderella in Dayton? It could happen.

Since the eight-team format started in 2011, at least one team coming out of Dayton has gone on to win a second game in the tournament. That first year, No. 11 seed VCU got on a roll and went all the way to the Final Four, beating No. 1 Kansas in the regional final.