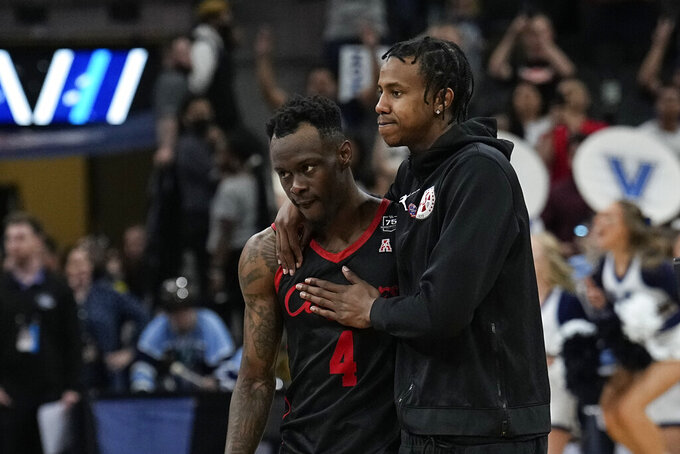 Houston guard Taze Moore leaves the court after their loss against Villanova during a college basketball game in the Elite Eight round of the NCAA tournament on Saturday, March 26, 2022, in San Antonio. (AP Photo/Eric Gay)

SAN ANTONIO (AP) — Houston is out of the NCAA Tournament, yet the Cougars look built to stay around as a power program for a long time.

Cougars coach Kelvin Sampson has already promised as much.

“We're not going anywhere,” Sampson said. “We'll be back.”

With a Final Four appearance last season and a rebuilt lineup that nearly got them there again, Sampson’s program has more than revived the memories of the Phi Slama Jama era of Clyde Drexler and Hakeem Olajuwan.

Saturday's 50-44 loss to Villanova in in the South Region final will sting for a while, especially given how it played out in a slugfest that left a boisterous “home” crowd disappointed. But there are new expectations and new energy surrounding the program that will be looking to produce national title contenders annually.

Sampson said this week he wanted his players and fans to respect the past, as glorious as it was under Hall of Fame coach Guy Lewis and the talents of Drexler and Olajuwan, but to live in the present and look to the future. Olajuwan was at the game Saturday.

Houston fought hard to first rekindle those memories before it could build new ones. The university was left in the cold when the old Southwest Conference broke up and historic rivals left for the Big 12 and the Southeastern Conference. A succession of coaches and outdated facilities left it floundering.

The 66-year-old Sampson has changed that. He's revived the program and his own career. He led Oklahoma to the Final Four in 2002 before taking over at Indiana, where he was fired, then eventually landed in Houston.

The steady rise over eight seasons with Sampson first got the Cougars to the Sweet 16 in 2019, then last season's Final Four. But last year's team lost four starters and Sampson had to rebuild his lineup, only to lose two of this season's top players to injury.

The Cougars got back to the Elite Eight behind young guard Jamal Shead and transfers Taze Moore, Kyler Edwards and Josh Carlton. They challenged bigger opponents all season with grinding defense and refused to back down from college basketball's blueblood programs in the NCAA Tournament.

The defensive effort kept Houston in the game against Villanova when no shots were falling. The Cougars twice rallied from double-digit deficits and pulled within two points late.

But they were doomed by a 29.8% shooting effort overall, including 1 of 20 from 3-point range.

The Cougars won the American Athletic Conference regular-season and tournament championships, then powered through their first three NCAA games. Another Final Four was there for the taking in front of a huge section of fans wearing Houston red who had made the 200-mile drive to the AT&T Center in San Antonio.

“Just really proud of this team, everything they accomplished. Ten years from now, 20 years from now, they'll come back with their families and show their kids those banners on the wall, and they'll remember this with fondness and pride,” Sampson said.

“When we first got to Houston, we couldn’t get anyone to come to our games, students, anybody," he said. “Now look at us today.”

Sampson will again have to replace multiple starters from this Elite Eight squad. Given what Houston did this year, there's no reason to think the program will take a step backward.

Houston will shed the mid-major label it wears in the AAC when it joins a revamped Big 12 in a few years. That will eventually mean more money and more television exposure. Sampson promised the future will also include more deep runs in the tournament.

“Cougar basketball is here to stay, man,” he said.