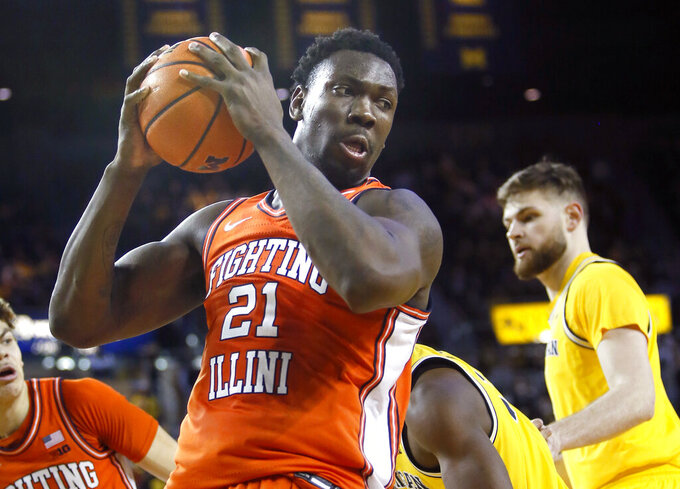 No. 24 Iowa at No. 20 Illinois, Sunday. It's the Big Ten's only matchup of ranked teams this weekend. Illinois (21-8, 14-5), which held off Penn State 60-55 on Thursday night, can lock up sole possession of second place with a win, or even a share of the regular-season title if upstart Nebraska can knock off No. 10 Wisconsin on the road Sunday. This will be the fifth time in six meetings that Iowa and Illinois are both ranked when they play, and four of the last five have been decided by seven points or less. Illinois won 87-83 in Iowa City in December with four players scoring 17 points or more.

If Indiana and Rutgers can get off the bubble and land bids, the Big Ten is on track to put nine teams in the NCAA Tournament for the second straight year. Wisconsin is a popular pick among prognosticators to earn the highest seed (No. 3) and play the first weekend in Milwaukee, less than 90 minutes away from Madison. Of course, the Big Ten Tournament starting Wednesday in Indianapolis could shake things up.

Wisconsin freshman Chucky Hepburn is still basking in the glow of his banked-in 3-pointer that beat Purdue, and now he faces his home-state school for the second time when Nebraska visits Sunday. Hepburn, who grew up in Omaha, scored 13 points and made two huge steals in the Badgers' 73-65 win in Lincoln on Jan. 27. Hepburn has been overshadowed by freshman such as Nebraska's Bryce McGowens and Ohio State's Malaki Branham, but the Badgers probably wouldn't be closing in on their first outright Big Ten title since 2015 without him.

Iowa's Jordan Bohannon went into Thursday's game against Michigan with 435 career 3-pointers, tied for sixth in NCAA history. The 435 triples are the second-most by a player from a major conference (457 by Duke’s J.J. Reddick). ... Nebraska ended a 24-game losing streak against Top 25 opponents when it won at Ohio State this week. Of those 24, 23 came under third-year coach Fred Hoiberg. ... Rutgers, which entered the Big Ten in 2014, has matched the 2019-20 team for most conference wins (11). The Scarlet Knights' four Big Ten road wins matched last season's total. ... Iowa has won 18 games by 10 points or more, including 11 by 20 points or more.

Iowa (20-7, 14-4) is the hottest team in the Big Ten as the top four seeds prepare to play their first games in the conference tournament Friday. The Hawkeyes headed to Indianapolis off four straight wins and with Big Ten player of the year Caitlin Clark, who leads the nation in points per game (27.5), assists (8.3) and triple doubles (5). She has scored at least 30 points in 10 games. Ohio State (22-5, 14-4) shared the regular-season title with Iowa, but won the head-to-head tiebreaker for the top seed. Michigan (22-5, 13-4) is the No. 3 seed and coming off a 24-point loss to Iowa on Sunday. Maryland (21-7, 13-4) is looking for its third straight Big Ten Tournament title and sixth in eight years.