Bradley banks in game-winner to lift Cal past Washington 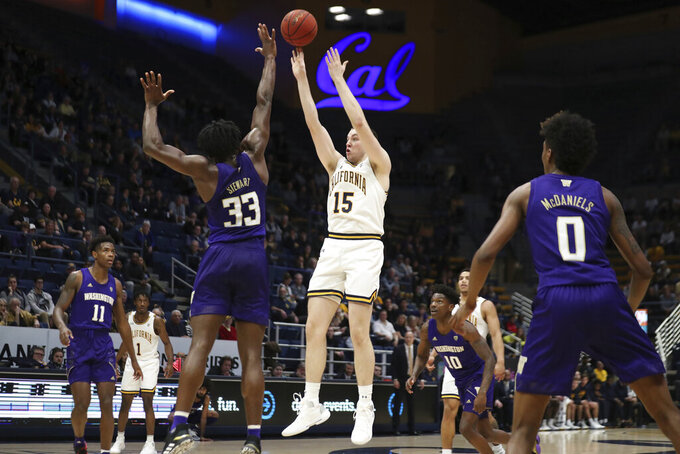 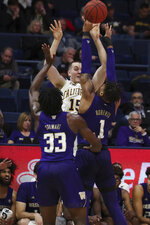 BERKELEY, Calif. (AP) — Matt Bradley didn't think much of his game-winning 3-pointer in overtime other than he missed a similar shot at the end of regulatation. California coach Mark Fox, on the other hand, compared Bradley's bucket to watching a sunset.

"You wish you could watch that thing for 30 minutes but it happens in like two seconds," Fox said. "It was a thing of beauty. As hard as he’s worked and as much as he’s bought in, he deserved to have that thing go down."

Bradley banked in a 3-pointer with six seconds remaining in overtime, lifting California to a 61-58 win over Washington on Saturday night.

Jaden McDaniels had 12 points and 11 rebounds for Washington. The Huskies (11-6, 1-3) rallied from 10 down in the final 12 minutes of the second half but made only one basket in overtime.

Bradley scored on a left-handed layup with 1:35 left in overtime to give Cal a two-point lead. The two teams traded misses before Nahziah Carter made two of three free throws that made it 58-all with 34.2 seconds left after being fouled taking a 3-pointer by Anticevich.

Bradley, Cal’s leading scorer this season, got the ball and dribbled the clock down before taking the game-winning shot above the arc and over McDaniels, Washington’s 6-foot-9 freshman. The ball banked in as the crowd at Haas Pavilion erupted.

“Coach told me I had to work out, try to get a shot off,” Bradley said. “The second half I had the same opportunity which I trusted Grant, he took a really good shot and ended up missing. I was like, ‘Let me just give it a go,’ and I made it.”

Both teams missed a shot to win at the end of regulation. Anticevich missed a 3-pointer with 11 seconds remaining and Carter’s 3 at the buzzer fell short and hit the front of the rim.

Neither team shot well early but California pulled away late in the first half. Anticevich hit a 3-pointer and then a jumper before Austin made a jumper to give Cal a 28-20 lead at the break.

Washington made only seven shots in the first half, five of them 3’s.

“This win was more about the investment that we’ve demanded that these kids make,” Fox said. “Late in the game it just meant a lot to our team to dig in, whether it’s offense or defense, to make the plays that we needed to make.”

Washington: The Huskies grabbed 44 rebounds and outhustled the Bears for much of the second half but shot 18 of 61 (29.5 %) for the game. They were especially cold in overtime, making one of their four attempts.

California: Back-to-back conference wins following a loss to Stanford is a definite step forward for Mark Fox’s program. The Bears limited their turnovers and played good defense for most of the game.

DOING IT WITH DEFENSE

Fox has preached defense since he stepped on campus. Slowly but surely the Bears are catching on. They held the Huskies to a season-low shooting percentage. It was also the lowest an opponent has shot against California this season. “We really locked up,” Bradley said. “We’ve gotten a lot better focusing on defense, just knowing that if our shots aren’t falling we’ll win with defense. That kind of proved tonight.”

California: Play at USC on Thursday.