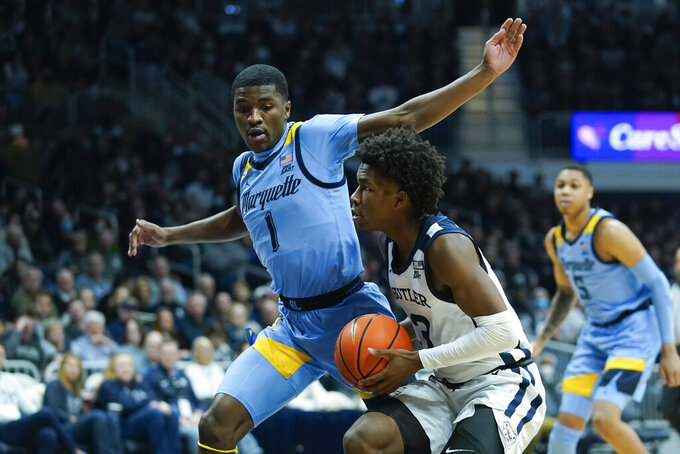 Butler's Chuck Harris (3) goes to the basket against Marquette's Kam Jones (1) during the first half of an NCAA college basketball game, Saturday, Feb. 12, 2022, in Indianapolis. (AP Photo/Darron Cummings)

INDIANAPOLIS (AP) — The Butler Bulldogs were tired of falling short.

So on Saturday, they aggressively took control, stood up to the challenges and finally found a way to bite back.

Bryce Golden scored a career-high 22 points, Bo Hodges posted a double-double and Aaron Thompson broke the school's career-assist record as the Bulldogs held off No. 18 Marquette 85-79.

“The ball was moving well tonight," Golden said. “Coach always says the best man’s the open man, and we did a good job capitalizing on that."

It showed — right from the start.

Butler opened the game by making 6 of 8 from 3-point range and finished with a season-high 13 from beyond the arc. Golden, Hodges and Thompson routinely won the battle to loose balls and rebounds, and the surprising Golden Eagles couldn't keep up.

As a result, the Bulldogs (12-13, 5-9 Big East) snapped a three-game losing streak and earned its first win over a ranked team in nine tries this season.

The postgame party even included a celebration for Thompson, who had five assists to make it 541 for the career — one more than Thomas Jackson, who was a teammate of Butler coach LaVall Jordan.

“An assist record, you can’t do it alone so this is not just an award for me, this is an award for all the guys I’ve played with throughout my career," Thompson said.

But more than just a respite for a team that had lost its last three by three or fewer points, Jordan hopes the win is a turning point.

While Justin Lewis led Marquette with 27 points and nine rebounds and Tyler Kolek added 17 points, the Golden Eagles (16-9, 8-6) never led and never even had a chance to tie the score after Butler took a 10-5 lead.

The combination helped Butler jump to a 26-11 lead less than nine minutes into the game and a subsequent 7-0 run helped the Bulldogs pull out to a 21-point lead.

Only then did the Golden Eagles start fighting back. Marquette cut the halftime deficit to 42-27, opened the second half with the first five points to make it a 10-point game and after Butler rebuilt a 55-39 lead, the Golden Eagles finally close to 60-55 with 7:44 left.

Butler answered with a five-point flurry. And as the teams traded baskets and free throws down the stretch, Marquette never got closer than four.

“It’s hard to come back and win when you dig yourself a hole like that," Smart said.

Marquette: The Golden Eagles have played better than expected this season. But losses at No. 24 UConn followed by a subpar showing at Butler didn't help. With no more ranked teams between now and the conference tournament, Marquette needs to rebound.

Butler: The game was what Bulldogs fans expected this season. The team was fast and efficient on offense and pestered Marquette defensively. One more win would get Butler back to .500, a major accomplishment given how this season has gone. The question is whether the Bulldogs can use this win to make a postseason push.

Marquette opened this week with its highest ranking in nearly two years. Two losses in five days, especially this one, will certainly send the Golden Eagles sliding. The question is how much they'll fall in Monday's rankings.