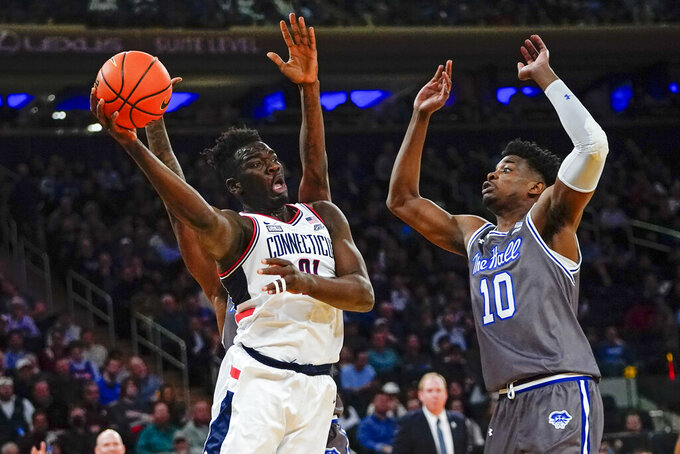 NEW YORK (AP) — UConn fans roared the loudest when Hall of Fame coach Jim Calhoun was shown on the big screen at the Big East Tournament. Seemingly leading the cheers? That was Kemba Walker's mother, wearing her son's No. 15 UConn jersey on a milestone day in team history.

Eight years after UConn quit the Big East, and a year after its return was spoiled by a nearly-empty arena because of the pandemic, the Huskies felt back home again at Madison Square Garden.

R.J. Cole and Tyrese Martin each scored 17 points to lead No. 20 Connecticut into the Big East semifinals with a 62-52 win over Seton Hall on Thursday night. The Huskies (23-8) face No. 8 Villanova next.

“That's why you come to a place like UConn,” coach Dan Hurley said. “The place was rocking with UConn fans. Tomorrow’s gonna be insanity in here."

The Huskies won with Calhoun watching and smiling as he soaked in the cheers from the legion of local, vocal fans who traveled to New York. He won three national championships all under the Big East banner, his last one in 2011 -- also the same year the Huskies won their last Big East Tournament championship.

Thursday was also 11 years to the day that Walker hit his stepback jumper at the buzzer to stun Pitt and send UConn into the Big East semis.

This win wasn’t as dramatic, and it didn’t have to be to earn UConn a date with Villanova and make the semifinals for the second straight season. Last year, they lost to Creighton in front of mostly friends and family because no tickets were made available to the public.

This time, UConn fans made up most of the 19,182 fans in attendance.

Cole, a first-team all-conference selection, kept the Huskies' hopes for both a conference tournament championship and an automatic NCAA Tournament bid alive with a series of big plays in the second half.

Cole hit a 3 to make it 32-20 and surely tried to give UConn a highlight to remember — other than being good-naturedly roasted on social media for a TV graphic that said his favorite band is the Jonas Brothers. He cut off a Seton Hall run with a mid-range jumper that kept the lead at 11 and kept the Huskies' run rolling on a no-look pass to Andre Jackson under the basket for a dunk and a 38-27 lead.

“It's not like we’re going to take this loss and let it tank us or anything,” Cale said. “We’re in a good spot right now.”

The game was more of an offensive struggle than a defensive masterpiece. Missed tip-ins and open jumpers. Botched layups. Seton Hall’s 18 points in the first half was its lowest total in the first half of any game this season.

Both teams shot 36% from the floor.

“I think our defensive effort has been really good,” Seton Hall coach Kevin Willard said. "We haven’t been finishing possessions the last couple of days."

Case in point: Cale tried to slice the deficit to single digits late in the second half when he stole the ball, one of seven for the Pirates. Seton Hall, though, promptly turned it over on an offensive foul.

Cole buried a 3 and hopped his way back on defense to the delight of the Huskies crowd and a 15-point lead the Huskies would not waste.

“I think we made everything just really hard on them," said Hurley, a former Seton Hall point guard.

Seton Hall: The Pirates, who beat Georgetown in the Big East tourney opener, now wait to find out where they go as an at-large team in the NCAA Tournament. Seton Hall’s six-game winning streak had matched its longest of the season.

“I think a couple of days of rest, getting back to practices, we’ll be all right,” Cale said.

Villanova: Barely squeezed into the Big East Tournament semifinals, overcoming a 17-point deficit in the second half to beat St. John’s 66-65. The teams split the season series.

Providence and Creighton play in the other semifinal.