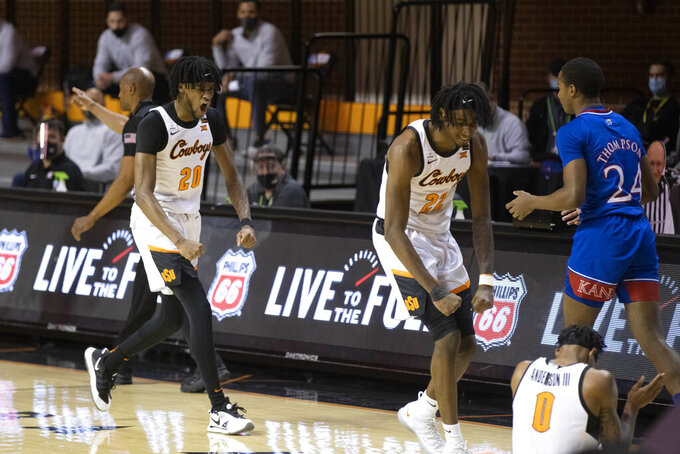 Cade Cunningham scored 18 points, and the Cowboys held off a late rally to beat No. 6 Kansas 75-70 on Tuesday night.

Kansas trailed by three in the closing seconds and had possession, but Oklahoma State's Bryce Williams stole the inbounds pass, drove the length of the floor and and dunked as time expired.

The Cowboys blew a 19-point lead in a loss to West Virginia eight days earlier and squandered a 16-point lead in the second half of this one before scoring the game's final eight points.

“This is what the process looks like,” Oklahoma State coach Mike Boynton said. “It doesn’t always happen immediately. It’s not easy.”

Williams scored 17 points and Avery Anderson III added 14 for the Cowboys (9-3, 3-3 Big 12). It was the fifth time in the past eight tries that Oklahoma State has beaten the Jayhawks at Gallagher-Iba Arena.

David McCormack scored a season-high 24 points for Kansas (10-3, 4-2). But the Jayhawks struggled with shot selection and made 5 of 21 3-pointers.

“I’m disappointed,” Kansas coach Bill Self said. “We didn’t deserve to win, but certainly, we put ourselves in position that we could have won, and I thought our guys did compete and tried really hard for a stretch of the game, especially late.”

Early on, it was all Oklahoma State.

On one first-half possession, Cunningham collected a rebound, then delivered a perfect left-handed bounce pass about half the length of the court to a streaking Anderson, who made a layup and was fouled. Anderson's free throw put Oklahoma State ahead 43-30 with 2:36 left in the first half. Cunningham scored 14 points in the first half to help the Cowboys lead 46-35 at the break.

Kansas battled back, slowing the Cowboys with a triangle-and-two zone defense. Two layups by Marcus Garrett put the Jayhawks up 68-67. McCormack scored over Cunningham to put Kansas ahead 70-67 with 1:21 to play.

Oklahoma State's Isaac Likekele hit a three with a minute to go to tie the game at 70.

“If Likekele doesn’t make that shot, we win the game,” Self said.

Garrett drove again, but this time, Cunningham blocked him, then found a teammate with a wild save. The fast break led to a made layup by Rondel Walker, who was fouled. His free throw put the Cowboys ahead 73-70.

Garrett missed a 3-pointer, and Oklahoma State got the ball in a scramble and called timeout with 17.8 seconds left. Williams missed the free throw to set up the final sequence for Kansas.

Ochai Agbaji missed two 3-pointers, but the ball went out of bounds off Oklahoma State with 4.2 seconds to play, setting up Williams' steal.

The Cowboys were prepared to handle Kansas' surge after their tough loss to West Virginia.

“We just kept saying we’ve been there before," Williams said. "Give credit to Kansas. They’re one of the top teams in the country for a reason. They’re going to make their runs, they’re going to make shots, get stops, things like that. So you can’t hang your head when they do what they are supposed to do.”

Kansas: The Jayhawks suffered their second Big 12 loss and are in danger of falling out of reach of league leaders Baylor and Texas — both unbeaten in conference play.

“Certainly, it’s getting to the point where there’s less than zero margin for error moving forward,” Self said.

Oklahoma State: The Cowboys already claimed a nice win at Texas Tech on Jan. 2, but this one is even bigger. Cunningham showed he can rise up against the big-time teams, and the Cowboys showed they can support him.

Self said Kansas freshman Bryce Thompson broke a finger in a scrum and will be out for a while. Self also said Tyon Grant-Foster suffered a shoulder injury. He only played one minute.

McCormack on Williams' steal in the closing seconds: “Bryce is just -- he has a high IQ for the game, so yeah, I would say that was on him being actively aware of what was going on on the court and making the right read."

Walker, a 6-foot-4 freshman guard, had eight points and 10 rebounds. Kansas freshman Jalen Wilson, who had averaged 14.7 points per game, finished with four on 2-for-7 shooting in 32 minutes.