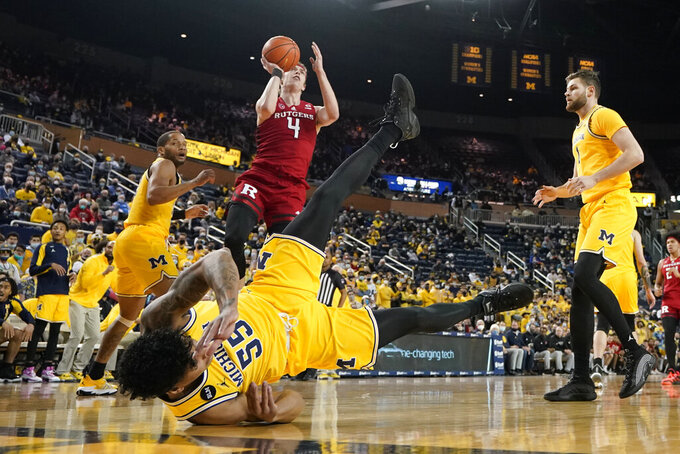 PISCATAWAY, N.J. (AP) — After 31 years of coaching, Steve Pikiell is looking forward to the time when he can roll a basketball onto the court, sit back and watch Rutgers win game after game.

As soon as the words came out his mouth Thursday, the 54-year-old Scarlet Knights coach started laughing. It was almost as if he remembered his team plays in the Big Ten Conference.

The league is stacked with some of the best teams in Division I. Five Big Ten teams are currently ranked in the AP Top 25, and Michigan State and Rutgers (16-11, 10-7) nearly got enough votes to be part of the poll this past week. Nobody wins them all.

Rutgers is at the end of a three-week buzz-saw schedule that has featured six of seven games against ranked teams.

What's remarkable is the Scarlet Knights have used the run to thrust themselves into the NCAA Tournament picture. They won four straight over ranked opponents before losing at now-No. 4 Purdue on Sunday and at Michigan on Wednesday. Up next is No. 13 Wisconsin Saturday at home.

“I don’t know in the history of college basketball if anyone has played six ranked teams in seven games,” Pikiell said Thursday. “I mean, these teams aren’t just ranked. They’re in the top 15. It’s not just the Top 25. It's the top 15.”

Though the recent run has been eye-opening, many expected good things from the Scarlet Knights after they went 16-11 last season and made the NCAA Tournament for the first time since 1991. Tenth-seeded Rutgers knocked off No. 7 seed Clemson in the first round and had a nine-point lead over No. 2 seed Houston before falling 63-60 in the second round. The Cougars ended up reaching the Final Four.

Guard Geo Baker and forward Ron Harper Jr. returned this season, but the Scarlet Knights still struggled early. Playing without Baker for six games, they lost to DePaul, Lafayette and UMass and were pushed by others.

“Early in the year, we lost one-possession games,” Pikiell said. “That's what we were going through. We thought we were pretty good but we had to prove it again this year. They thought last year was just going to happen again and we didn’t play as well as you need to.”

The turnaround started this month, following an overtime loss on the road to Northwestern. It was Rutgers' third loss in four games, with the only win a two-point decision over last-place Nebraska.

The Scatlet Knights weren't even on the NCAA bubble at that point.

What followed was four straight wins at home over No. 13 Michigan State, No. 16 Ohio State, No. 14 Wisconsin and No. 12 Illinois, a team that had beaten the Scarlet Knights by 35 points earlier in the season.

Those rankings have changed, but it made Rutgers the first Division I team with wins in four consecutive games coming over ranked foes since Michigan State in 2019-20. It also gave the Scatlet Knights a 5-2 record against ranked opponents this season, including a win over then-No. 1 Purdue after the Boilermakers reached the top spot for the first time.

The run has taken a toll. Rutgers was beaten by No. 5 Purdue Sunday and lost 71-62 to Michigan on Wednesday with the Scarlet Knights out of gas and the Wolverines playing with added incentive after coach Juwan Howard's suspension.

“I said some teams get better and some teams get worse,” Pikiell said. “I’m thankful that these guys decided to get better. We can play anybody. Yeah, but in our league too, we can lose to anybody when you’re not right.”

Besides Harper (15.7 points) and Baker (11.9), Rutgers is deep. Paul Mulcahy has averaged 17 points recently and athletic big man Cliff Omoruyi has gotten a lot better, averaging 11.8 points and 7.8 rebounds. Caleb McConnell is the best defensive player in the league, averaging a conference-high 2.3 steals.

For now, Pikiell is focused on facing Wisconsin again on a short turnaround. His team got back from Michigan at 1 a.m. Thursday and three of his players had 8 a.m. classes.

“I've had to fight from day one,” Pikiell said. “That’s all I know, and you’re going to have some great wins. You can have some tough losses. You have to keep moving, keep getting better and keep believing in your guys.”