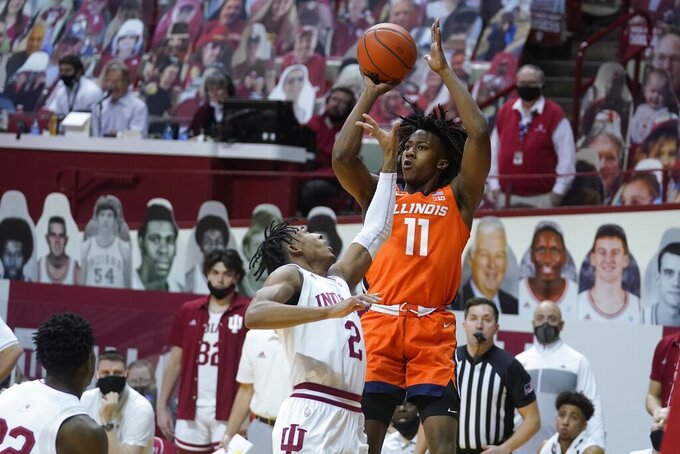 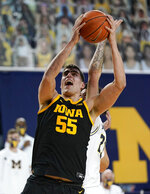 Iowa’s Luka Garza is The Associated Press player of the year in the Big Ten Conference for the second year in a row and Michigan's Juwan Howard is coach of the year.

Garza won a split vote with Illinois' Ayo Dosunmu after being a unanimous pick in 2020. Garza and Dosunmu were unanimous choices for spots on the AP’s All-Big Ten team, also announced Tuesday, in voting by 15 journalists who cover the conference.

Michigan's Hunter Dickinson was named newcomer of the year in a split vote with teammate Mike Smith.

The second team is made up of Michigan’s Franz Wagner and Isaiah Livers, Illinois’ Kofi Cockburn, Iowa’s Joe Wieskamp and Purdue’s Trevion Williams.

Garza averages a conference-best 23.8 points per game and has 12 double-doubles in 27 games. He broke Roy Marble's 32-year-old career scoring record last month, and Iowa retired his No. 55 after its win over Wisconsin on Sunday.

Garza received 11 votes for player of the year while Dosunmu got four.

Dickinson, who entered the Big Ten when the league is loaded with post players, made his mark with 14.3 points and 7.7 rebounds per game. His 60% shooting ranks second in the conference behind Cockburn's 66%. He received 13 votes for newcomer of the year, and Smith received two.

Howard coached Michigan to the Big Ten title in a season when the Wolverines were forced to go on a COVID-19 pause for three weeks. Michigan finished ninth last year, Howard's first at his alma mater after six seasons as an NBA assistant. Howard got 14 votes for coach of the year; Illinois' Brad Underwood received the other one.