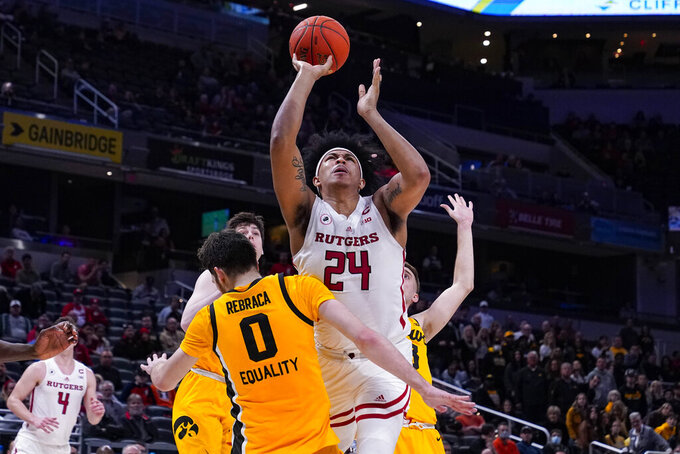 DAYTON, Ohio (AP) — Peter Kiss might be the most exciting basketball player that hardly anyone has heard of.

Not to be confused with Peter Criss — the former drummer for the shock and awe rock band Kiss — despite the obvious similarities in the names, the guard from Bryant University in Smithfield, Rhode Island, is leading the nation in scoring with 25.1 points per game and has his team in the NCAA Tournament for the first time.

The 6-foot-5 Kiss likes to show off his personality on the court. He's animated and fun-loving and has been known to drop to the floor for some in-game pushups. No doubt the TV cameras will know where he is every minute when the Bulldogs (22-9) take on hometown favorite Wright State (21-13) in the early game of Wednesday's First Four.

“I love playing,” Kiss said. “I have so much joy out there. I don’t think anybody in the country has more fun playing basketball than I do, honestly.”

Kiss has been around the game for a while, thanks to the transfer portal. He started at Quinnipiac, spent three seasons at Rutgers, two of them as a redshirt, before landing at Bryant for the 2020-21 season.

He leans into the Kiss references, too, sometimes warming up in a Kiss concert T-shirt.

“I’ve heard a few of their songs obviously, but I love the shirt,” he said. "It’s obviously my last name, and it fits me well. I want to rock and roll all night.”

Bryant started 4-7 in nonconference play and then went 19-2 in the Northeast Conference, including three wins in the conference tournament, to secure its first-ever tournament bid. Wright State has won five straight.

The Raiders, who play their home games 15 minutes across town from UD Arena, will have the crowd on their side. They won the Horizon League tournament, are making their fourth NCAA Tournament appearance and looking for their first win.

“Obviously, we’ll have good fan showing,” Raiders junior guard Tim Finke said. “And it’s no different of a drive for my parents, so I’m sure they’re happy about that. It will be fun.”

Tanner Holden (19.8 points per game) and Grant Basile (18.5 ppg) are the guys to watch for Wright State, which averages more than 75 points per game.

The winner of this game plays No. 1 seed Arizona on Friday in San Diego.

The late game Wednesday between Rutgers (18-13) and Notre Dame (22-10) should be a defensive struggle.

The winner will leave Dayton as the 11th seed in the West Region and play sixth-seeded Alabama on Friday in San Diego.

The Scarlet Knights' record isn't eyepopping, but they finished 12-8 in the rugged Big Ten, knocking off ranked conference opponents in four straight games in February.

Rutgers' specialty is defense, forcing turnovers and closing up lanes. The Scarlet Knights were the second-best defensive squad in the conference, allowing opponents just 66 points per game and 44% of their shots.

Rutgers is making back-to-back tournament appearances for the first time since 1975 and 1976.

An NCAA Tournament berth for Notre Dame looked unlikely when the Irish started 4-5. But they rebounded with six straight wins and got a signature victory in December when they upset then-No. 7 Kentucky. Other quality wins were scarce in a down year for the ACC, but the Irish put up a respectable regular season conference record of 15-5.

Making its first tournament appearance since 2017, Notre Dame is led by guard Blake Wesley, who averages 14.6 points per game and is projected to be a first-round NBA draft pick.

“Came in here (to) Notre Dame with intentions of making it every year but obviously we haven’t been there yet,” fifth-year Irish guard Dane Goodwin said. “And very much looking forward to this. Been waiting, working a lot. This group’s been through a lot. It’s cool to see it finally coming together at the end. And hopefully we can make a deep run here.”

It'll be the 13th trip to the tournament for Notre Dame coach Mike Brey in his 22 seasons at the school.