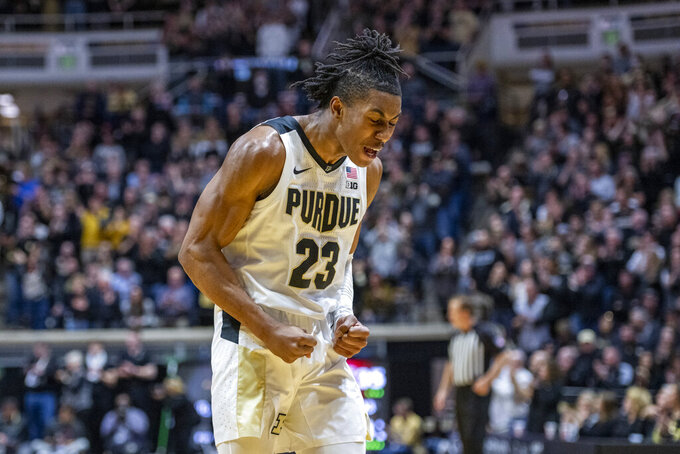 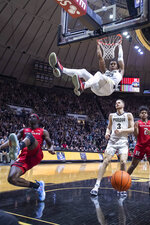 WEST LAFAYETTE, Ind. (AP) — For Purdue coach Matt Painter, Jaden Ivey's ability to break down the defense was the difference.

Rutgers had won its last four games, all against teams in the Top 25. The Scarlet Knights also beatePurdue in December.

The Boilermakers stopped the string as Ivey did much of his scoring at the line, hitting 15 of 18 free throws. Trevion Williams and Sasha Stefanovic each scored 11 points and Mason Gillis 10 points for Purdue (24-4, 13-4 Big Ten).

Zach Edey and Trevion Williams were a combined 10-of-14 from the field with Edey making 5 of 6 shots.

“I think teams know if they play us 1-on-1, there is high chance we're going to score,” Williams said. “It's all about making the other team make a decision. You are either going to play us 1-on-1 or you are going to sink in and we'll dish it out to our shooters. It's been working for us to go inside out."

“We were trying to push the lead,” Ivey said. “We didn’t want it to get close at all. We just played great team basketball today. We made plays down the stretch. They were pressing us the whole game. I felt were patient and we took what they gave us.”

“We had the balance of driving the basketball and make enough 3s,” Painter said. “We had some open ones you like to see go down. We just kept trying to execute, We outrebounded them and had fewer turnovers than them at their place and still lost. Tonight we had outrebounded them and fewer turnovers and won. If you do that you have a chance and it helps when you can make some shots. We made enough tonight.'

The Boilermakers closed the first half with a 9-1 run to take a 45-36 lead, then opened the second half by scoring the first 11 points. Purdue held Rutgers scoreless for nearly five minutes in pushing the lead to 56-36.

For the game, Purdue shot 53% while Rutgers shot 51%. The big difference was Purdue had a 19-4 edge in points off turnovers. Rutgers had 11 turnovers, four more than Purdue. The Boilermakers also made 24 of 29 free throws to Rutgers' 13 of 17.

Rutgers: The Scarlet Knights saw their string of four consecutive victories over ranked opponents end — they beat Michigan State, Ohio State, Wisconsin and Illinois during that streak. Despite some disappointing non-conference losses, Rutgers has put itself back on the NCAA Tournament bubble. Rutgers had upset then-No. 1 Purdue 70-68 on Dec. 9 as Harper sank a deep 3-pointer at the buzzer.

With No. 2 Auburn losing to unranked Florida and No. 4 Kentucky losing to No. 16 Tennessee, No. 5 Purdue could move up in the rankings with two victories on the week.

Rutgers: At Michigan on Wednesday.

Purdue: At Michigan State on Saturday.