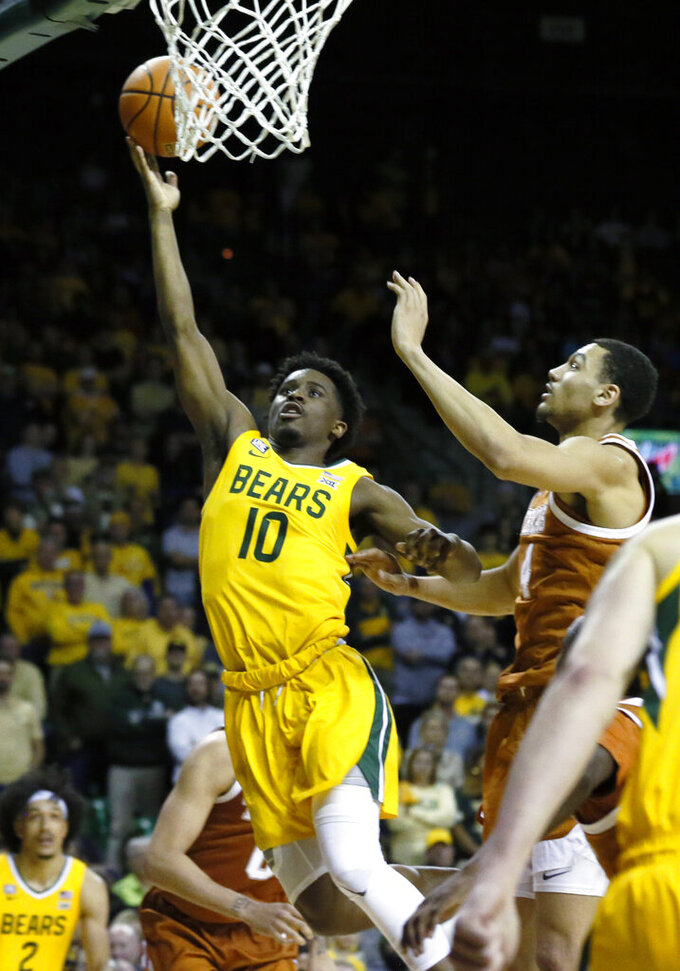 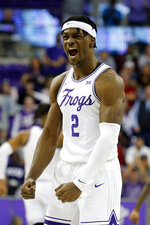 There are just three weeks left in the chase for the regular-season Big 12 title and sixth-ranked Kansas suddenly finds itself with a two-game lead in the standings. Giving chase are ninth-ranked Baylor and No. 11 Texas Tech, which just beat the Red Raiders on Wednesday night. All three have tough tasks Saturday as the Jayhawks (21-4, 10-2) visit West Virginia, the Bears (21-5, 9-4) face TCU and the Red Raiders (20-6, 9-4) head to No. 20 Texas.

In the other two games Saturday, Kansas State tries to continue its late-season surge to the NCAA tourney with a trip to Oklahoma State, and Iowa State tries to solidify its rapidly crumbling postseason hopes against Oklahoma.

Iowa State senior Izaiah Brockington is doing everything he can to help the Cyclones, whose stunning 12-0 start is a long-gone happy memory, stay in the hunt for the NCAA Tournament. The latest starring turn for the ex-St. Bonaventure-by-way-of Penn State guard came in a crucial 54-51 win over TCU, when he had 20 points, seven boards and two assists.

Kansas has won at least 21 games for the 33rd straight season, the longest active streak in the nation, which began with the 1989-90 season. The Jayhawks also have won at least 10 league games for the 28th straight season. ... Texas guard Andrew Jones was 8 of 14 from the field, 4 of 5 from beyond the arc and had seven rebounds in 43 minutes in an overtime win over Oklahoma on Tuesday night. ... James Akinjo of Baylor averaged 15 points and 7.5 assists with five steals in wins over Kansas State and Texas. ... The Wildcats' 15-point comeback win at Iowa State was the biggest road comeback in school history in the Big 12 era. ... Oklahoma State guard Isaac Likekele moved into fifth on the schools career assist list with his 428th in a game against West Virginia.

Sixth-ranked Iowa State concludes arguably the toughest back-to-back games in the Big 12 this season when the Cyclones, after visiting No. 14 Texas on Tuesday night, welcome No. 15 Oklahoma on Saturday. ... Emily Ryan set the Iowa State record and tied the Big 12 mark for a conference game with 17 assists on Feb. 12 at TCU. ... Kansas has won six straight Big 12 games for the first time since 1997, and its 9-4 record so far represents the most conference wins for the Jayhawks since the 1999-2000 season. ... Oklahoma's Taylor Robertson is the only player to hit at least 46% of her shots from beyond the arc while attempting at least eight per game since at least 1999-2000. ... Kansas State forward Ayoka Lee is trying to join Baylor's Brittney Griner as the only players to lead the Big 12 in scoring, field-goal percentage and blocks in the same season. ... The Horned Frogs' Lauren Heard is the eighth Division I player since 1999-2000 with at least 1,900 points, 750 rebounds, 500 assists and 250 steals in her career. Heard needs 84 points to reach 2,000 for her career.