A look at each Final Four team, through advanced stats 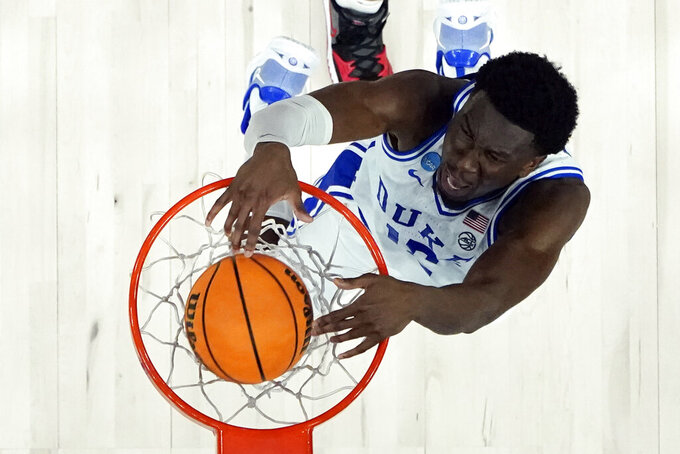 Duke center Mark Williams dunks during the second half of a basketball game against Arkansas in the Elite 8 round of the NCAA men's tournament Saturday, March 26, 2022, in San Francisco. (AP Photo/Marcio Jose Sanchez)

This year's Final Four includes quite a collection of big-name programs — but this hasn't been a particularly dominant group this season.

In fact, the top three teams — and five of the top six — in the current Pomeroy rankings are absent. That's a change from last year, when Gonzaga and Baylor were terrific all season and then met in the title game.

Here's a statistical look at this season's accomplished-but-flawed Final Four quartet, using advanced stats. Many of the stats cited in this piece can be found at kenpom.com and are becoming more and more common in mainstream basketball analysis.

Weaknesses: Kansas doesn't have many glaring problems, but the Jayhawks are only 159th in defensive rebounding percentage, meaning a team that can attack the offensive glass could be a problem. Kansas is also 116th in turnover percentage on offense — not awful, but a good bit worse than the other three teams in this Final Four.

In This Tournament: Opponents have made only 29.6% of their 3-pointers against Kansas this season. That's the type of thing that could even out over time — but it hasn't in this tournament so far. In the Sweet 16, Providence went 4 of 23 from long distance in a five-point loss to the Jayhawks. In the regional final, Miami went 3 of 21 against Kansas.

Strengths: The Blue Devils are the top team in the nation in adjusted offensive efficiency, and they've shown it in the tournament. They scored 78 points in 67 possessions in the Sweet 16 against Texas Tech, which has the country's top defense. Duke doesn't rely that heavily on the 3, which makes sense since the Blue Devils are shooting 56.3% from inside the arc, the eighth-best mark in the nation.

Weaknesses: The defense is 45th in adjusted efficiency. Specifically, Duke isn't good at forcing turnovers and has some issues on the defensive boards.

In This Tournament: It's been an offensive show for the Blue Devils. In addition to that game against Texas Tech, Duke scored 85 points in 66 possessions against Michigan State in the second round, and 78 in 70 against Arkansas in the regional final. The Blue Devils are shooting 60% from 2-point range in this tournament.

Strengths: Foul Villanova at your own risk. Wildcats are shooting 83% on free throws, meaning they have a chance to break the Division I record of 82.2% set by Harvard in 1984.

Weaknesses: Villanova shoots only 49.9% from 2-point range, which isn't a huge problem given how much damage the Wildcats can do from 3, but it's an issue. Villanova is also another team that isn't great on the defensive glass.

In This Tournament: The Wildcats rely a lot on the 3, and they also allow a lot of 3-point attempts. That arrangement tends to work out in Villanova's favor, and it has over the past four games. The Wildcats have made 35 3-pointers in the tournament, and opponents have made only 17.

Strengths: North Carolina is a tricky team to evaluate because its season stats are pedestrian for a Final Four team — but the Tar Heels seem to have turned a corner over the past month. According to the rankings at barttorvik.com, North Carolina has been the most efficient team in the country since March 1. If you look at the NCAA Tournament games only, the Tar Heels are fourth in adjusted offensive efficiency and eighth in adjusted defensive efficiency — the only team in the top 10 in both.

Weaknesses: On the season, North Carolina has an effective field goal percentage (eFG) of just 52.0. Only Villanova is worse among Final Four teams, and the Wildcats can make up for it by being excellent at the free throw line. The Tar Heels' defense has allowed an opposing eFG of 48.8%, and the other three remaining teams are at 47.0% or lower.

In This Tournament: In the NCAA Tournament, North Carolina's offensive eFG is 51.9%, not much different from the rest of the season. But the team's defensive eFG is an impressive 40.9%. And that's not just because the Tar Heels blew out 15th-seeded Saint Peter's. They also held top-seeded Baylor to an eFG of 40.1%. Duke should be a huge test of how far North Carolina's defense has come.