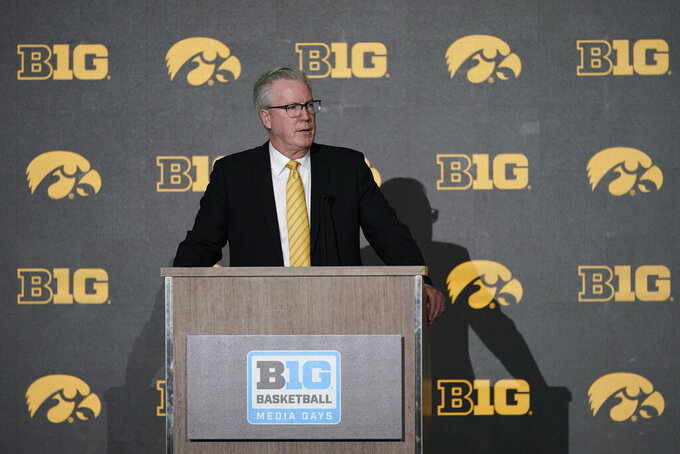 IOWA CITY, Iowa (AP) — With nine players back from the 26-win team that won the Big Ten Tournament, Iowa coach Fran McCaffery knew he could challenge his team.

So McCaffery put together a nonconference schedule featuring games against Seton Hall, No. 7 Duke, Georgia Tech, Iowa State and a Thanksgiving tournament with matchups against Clemson and either California or No. 14 TCU.

The Big Ten opener against Wisconsin ends a stretch of six games in 17 days.

The Hawkeyes’ wealth of experience was among the reasons McCaffery thought it would be manageable.

“You couldn’t play it otherwise," he said, “and it’s not going to be easy even then.”

The players are looking forward to the challenge.

“There’s a lot of really good opportunities for us to really go out and compete,” said forward Patrick McCaffery, the coach’s son. “This is what we signed up for. We signed up for this schedule.”

Fran McCaffery said the string of games will test the Hawkeyes' depth. He showed trust in his bench in the Big Ten Tournament championship game, giving minutes to 12 players in a 75-66 win over Purdue.

“You never know what kind of lineup we’re going to have,” McCaffery said. “And everybody’s fine with it. It helps our team grow.”

CHANGES AT THE POINT

McCaffery will be looking for a new point guard following the departures of Jordan Bohannon and Joe Toussaint. Toussaint transferred to West Virginia and Bohannon finished a career that lasted six seasons.

Ahron Ulis and Dasonte Bowen will get most of the minutes at the point. Tony Perkins, whose move into the starting lineup helped trigger Iowa’s late-season run, also can play the position. So can McCaffery’s son, Connor, a sixth-year player who has a career 3.5-to-1 assist-turnover ratio.

Iowa won 12 of 14 games after Perkins moved into the starting lineup late in the regular season. The coach said Perkins brought toughness the Hawkeyes needed in the closing weeks.

“I showed what I can do,” Perkins said.

Fran McCaffery said Iowa's best teams have had players like Perkins who are willing to body up. “He’s absolutely fearless,” McCaffery said.

The Hawkeyes likely will play lineups without a traditional center.

The 6-foot-9 Filip Rebraca started all 36 games at the post last season and averaged 5.8 points and 5.6 rebounds. McCaffery expects Rebraca to be more of a scorer this season. Rebraca averaged 16.8 points at North Dakota in 2020-21.

“I’ve said this before — he has way more offense in his game than we saw last year,” McCaffery said. “It was good at times, and it was pretty good in general. But I think you’ll see a more aggressive offensive player.”

Incoming freshman guard Josh Dix missed most of his senior season in high school after breaking his leg. Dix has been on a full practice schedule since September, and McCaffery thinks he can be a big part of Iowa’s rotation. McCaffery said Dix hasn't missed any practice since Sept. 1.

“He has had some great days of practice where he has been absolutely spectacular,” McCaffery said, "and there have been some days when he’s clearly learning, but physically he looks really good.”

The Hawkeyes open with home games against Bethune-Cookman on Nov. 7 and North Carolina A&T on Nov. 11 before the Gavitt Games. After the conference opener against Wisconsin, they play three of four Big Ten games on the road.