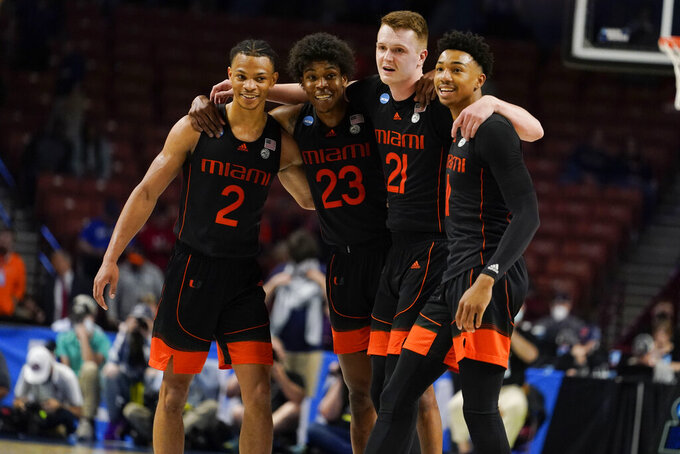 Miami players hug during the second half of a college basketball game against Auburn in the second round of the NCAA tournament Sunday, March 20, 2022, in Greenville, S.C. (AP Photo/Brynn Anderson)

GREENVILLE, S.C. (AP) — Miami showed there's still a place for old-school basketball played by experienced players — and for the Hurricanes, that's in the Sweet 16.

The 10th-seeded Hurricanes (25-10) used a second-half surge and neutralized No. 2 seeded Auburn's Jabari Smith and Walker Kessler in a 79-61 victory for their first trip to a regional semifinal in six years.

Auburn leaned heavily on the 6-foot-10 Smith, the Southeastern Conference freshman of the year, and 7-1 Kessler, the nation's blocked shots leader, on the way to an SEC title and what figured to be a deep run in the Midwest Region.

Instead, it was Miami's smaller, older, savvier lineup that dominated.

“Being small,” Hurricanes coach Jim Larranaga said, “has its advantages.”

Especially when the group included sixth-year “super seniors” in Charlie Moore and Kameron McGusty, and fearless sophomore Isaiah Wong, who are all 6-5 or shorter.

Wong had a game-high 21 points, McGusty scored 20 and Moore had 15 points, eight assists and seven rebounds.

“We just had a great night tonight,” said Sam Waardenburg, at 6-10, the tallest player in Miami's regular rotation. “It's what we can do every night.”

Miami advanced to the round of 16 for the fourth time overall and third time in Larranaga's 10 seasons. The Hurricanes will head to Chicago to take on No. 11 seed Iowa State in a matchup surely no one saw coming.

“This is a dream come true for every kid growing up, you watch these college games in March all day,” McGusty said. “You just dream of making a run in the tournament and this is the start to our run.”

Auburn's run ended in unbelievable fashion as its frontcourt of future NBA big men — both Smith and Kessler are projected first-rounders — were largely ineffective against Miami's relentless pressure.

Smith struggled to make shots, finishing 3 of 16 for 10 points — and got dunked on by the 6-3 Wong two days after Smith's one-handed jam in the opening round win over Jacksonville State was the talk of the tournament.

Kessler picked up two early fouls and spent much of the opening half on the bench. He, too, couldn't find his touch and missed all six of his attempts and tied his season low of two points after finishing with 13 points, 10 rebounds and nine blocks against Jacksonville State.

“They just sent somebody anytime I tried to attack or make a move,” Smith said. “They just kept bodies on me.”

The Tigers never held the lead, yet were only down 33-32 at the half.

But the Hurricanes opened the second half with a 15-7 burst off four points apiece by Wong and McGusty. By the time Moore hit a 3-pointer, the score was 48-39 and the raucous Auburn crowd at the start was quiet.

“In the second half, we were everywhere,” Larranaga said with pride.

The Tigers had no answers down the stretch, losing in the NCAA's second round for the second time in their three tournament appearances under coach Bruce Pearl.

Jaylin Williams and K.D. Johnson led Auburn with 12 points each. Smith had a game-high 15 rebounds.

“It's the first time that we got it handed to us,” Pearl said. “We didn't know how to respond.”

Miami: Larranaga would love to recapture the magic of his 2006 George Mason team’s run to the Final Four as a No. 11 seed. His Hurricanes are sharp right now. They've committed a total of just seven turnovers in two tournament games with Moore, at his fourth school in six years, in charge of the offense.

Auburn: The Tigers looked like a national championship contender much of the season. But their shooting touch went cold down the stretch. They shot just 30.4% (21 of 69) against Miami, the third time in the past six games they were under 40%.

Auburn's Smith said he has not decided on his future, although projections are for him to be an NBA lottery pick, perhaps even going No. 1 overall. Smith had tears in his eyes as he discussed his first season in college and talked about what he'll take away from this year, whatever happens. “The bad games, the good games, just taking it with me and taking Auburn, just thanking them for everything,” he said.

Up just 33-32 at the half, Larranaga, a movie buff, called on his best William Wallace speech from “Braveheart” to pump up his players. Citing the film, Larranaga explained how he told his team, “Look, it's a one-point game. Auburn is an outstanding team. We need to know what we're made of,” he said. “Can we go out and battle them for the next 20 minutes and keep our dream alive?”