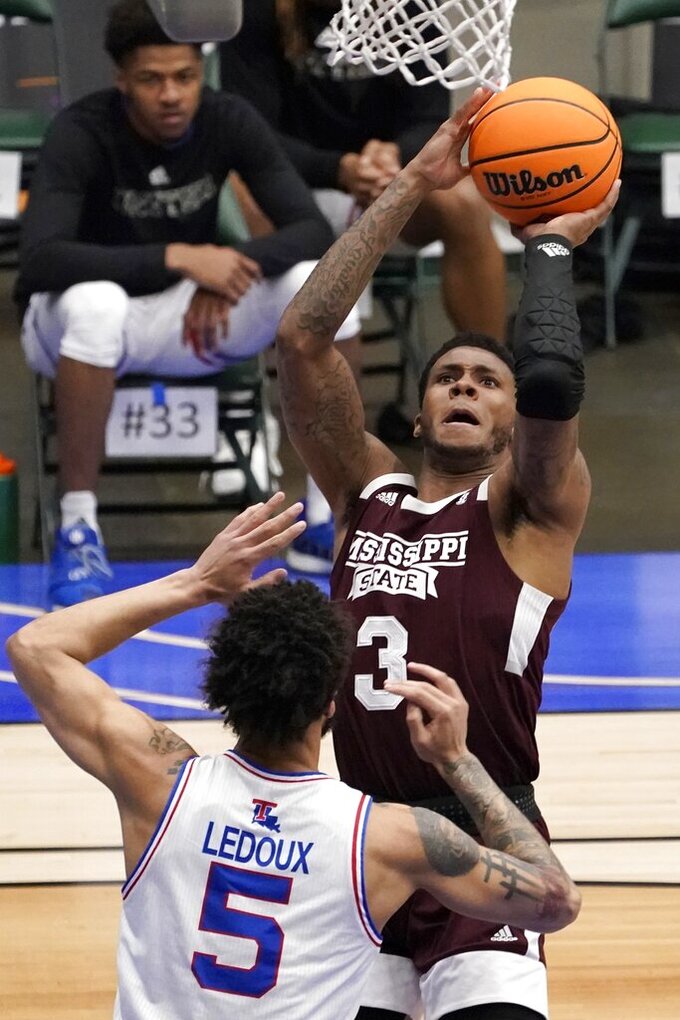 Louisiana Tech guard Kalob Ledoux (5) defends against a shot by Mississippi State guard D.J. Stewart Jr. (3) in the first half of an NCAA college basketball game in the semifinals of the NIT, Saturday, March 27, 2021, in Frisco, Texas. (AP Photo/Tony Gutierrez) 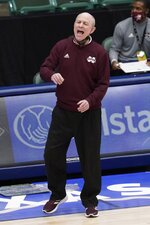 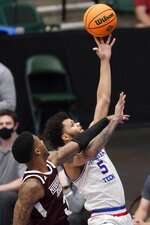 FRISCO, Texas (AP) — D.J. Stewart Jr. got off to such a fast start that Mississippi State didn't need another last-second shot to get to the NIT championship game.

Iverson Molinar scored 25 points and Stewart had 23, with the guards combining for nine 3-pointers, as Mississippi State led throughout to beat Louisiana Tech 84-62 on Saturday in a semifinal.

Two days after hitting the game-winning 3 in the closing seconds of the quarterfinal round to beat Richmond, Stewart made his first five shots, including all four of his made 3s in the game matching No. 4-seeded Bulldogs.

“That really gave us a lift, gave our guys a lot of confidence,” coach Ben Howland said.

Mississippi State (18-14) scored the game's first 11 points. Molinar, who finished with five 3s, hit from long range on the Bulldogs' first shot before Stewart had a run of 14 consecutive points for an early 17-5 lead.

“It kind of got us in a lead ... the way the game was going, it gave us momentum,” Molinar said.

Big freshman Kenneth Lofton Jr. had 20 points and 10 rebounds for Louisiana Tech (23-8), which opened the NIT with a win over another Southeastern Conference team, No. 1 seed Ole Miss. Kalob Ledoux had 11 points and Jacolby Pemberton 10.

“We played a very good team in Mississippi State today, and that very good team played extremely well,” Louisiana Tech coach Eric Konkol said. “We were playing from behind from the very beginning. I thought our team exerted a lot of effort to try to get back in.”

Derek Fountain added 15 points on 6-of-7 shooting for Mississippi State, which plays Memphis on Sunday in its first NIT title game. Louisiana Tech was in its first NIT semifinal since 1986, and has never gotten further.

Stewart picked up where he left off after pushing Mississippi State over Richmond 68-67, when his game-winning 3 was the last of 16 lead changes in a game that also included eight ties.

Isaiah Crawford made a layup for Louisiana Tech to cut the gap to 41-31. Mississippi State responded with a 13-3 run when Stewart had a layup and Molinar scored 11 points, including three consecutive 3s that made it 54-34 with 13:48 to play. Molinar scored 20 of his points after halftime, after Stewart had 19 in the first half.

“I feel like it’s just whoever has the hot hand, and getting them the ball,” Molinar said. “Just the flow of the game, I kind of let the game come to me, I don’t feel like I forced stuff. ... When I got it going, I got it going."

Mississippi State became the first team to score at least 70 points against Louisiana Tech since Jan. 22. Tech had set a school record by holding 14 consecutive opponents under 70 points since an 82-74 loss at UTEP.

Mississippi State takes on No. 1 seed Memphis on Sunday in the first NIT championship game played outside New York City. Louisiana Tech plays a consolation game against Colorado State, which lost 90-67 to the Tigers in the other semifinal Saturday.