Murray leads No. 24 Iowa past Rutgers in Big Ten Tournament 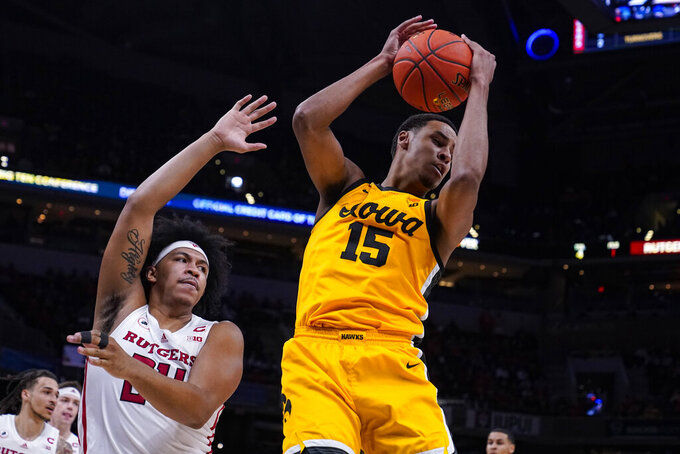 INDIANAPOLIS (AP) — For Keegan Murray, confidence has been the key to Iowa's recent roll

“We've learned how when we're knocked back down, how to get back up,” Murray said. “If we get down, we can get on a run in any point in the game. Our mentality is never give up whether we're up 20 or down 20.”

Murray had 26 points and eight rebounds to lead No. 24 Iowa to an 84-74 victory over Rutgers in the Big Ten quarterfinals Friday.

Fifth-seeded Iowa, which has won seven of its last eight games, will meet ninth-seeded Indiana, a surprise winner over top-seeded Illinois, on Saturday in the semifinals.

Geo Baker led fourth-seeded Rutgers (18-13) with 23 points. Clifford Omoruyi had 17 points, and Ron Harper Jr. and Paul Mulchay each scored 13 points. The Hawkeyes led by 18 points midway through the second half.

“Last year I just tried to learn from Luka as much I could,’” Murray said. “When you have a National Player of the Year on the team, you want to resemble him in a way. For me to break his record is a big credit to him and how he carried himself. It’s an honor, for sure.”

The Scarlet Knights cut the lead to 71-63 but could get no closer.

With Rutgers down 79-66, its bench was called for a technical and Bohannon hit two free throws to help seal it.

Murray scored 18 of his points in the first half to help the Hawkeyes take a 41-32 advantage.

“We got off to a good start, but couldn’t finish the deal against a really good team," said Rutgers coach Steve Pikiell, who agreed to a four-year contract extension through 2029-30 season before the game. "Fran is a great coach. Keegan Murray was a problem for us from the opening tip. I thought we played like us for about 13 minutes in the second half and clawed back in it.”

“We didn't play like Rutgers on defense,” Baker said. “We didn't get enough stops."

Pikiell said his team fouled too much. The Hawkeyes made 25 of 27 free throws.

Iowa sophomore guard Tony Perkins, who is from Lawrence North in Indianapolis, sank 6 of 9 shots en route to 16 points.

“A lot of people who have seen me through high school know what I can do and now I can bring it to the next level,” Perkins said. “Playing in my home city and seeing everyone in the crowd really boosted my energy a lot.”

Rutgers: The Scarlet Knights hope their 12-8 record in the tough Big Ten will enough to earn an NCAA Tournament berth despite three straight nonconference losses to DePaul, Lafayette and UMass. Iowa coach Fran McCaffery said it should be a no-brainer that Rutgers in the tournament.

Iowa: The Hawkeyes have won seven of eight and are entering the NCAA Tournament with momentum. Iowa blew by Northwestern 112-76 Thursday to set a Big Ten Tournament record for points.

Iowa: Faces Indiana on Saturday in the semifinals.