New BC coach Grant says style will be 'gritty, not pretty' 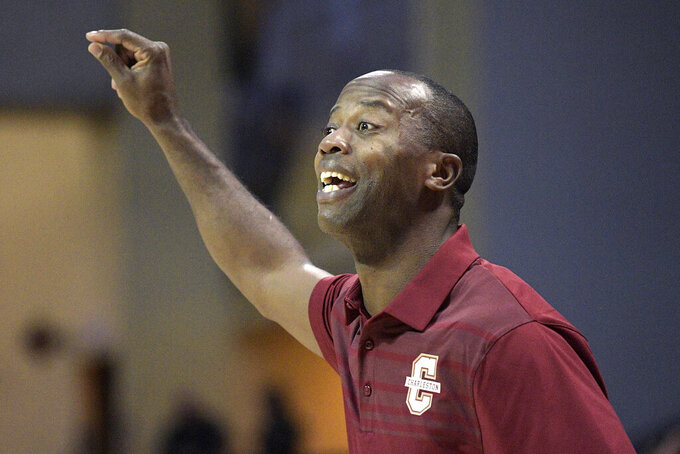 BOSTON (AP) — Earl Grant is hoping to return Boston College to its distant glory by bringing back a style reminiscent of its Big East days.

“I think we’ve got to be gritty and not pretty,” the former College of Charleston coach said Tuesday, a day after he was hired to take over in Chestnut Hill. “This is a fighter’s place. This is a place where fighters play.”

A longtime independent before joining the Big East Conference in 1979, Boston College found its greatest success in the physical league, reaching the NCAA Tournament 11 times in 26 years. But since the jump to the Atlantic Coast Conference in 2005, things haven’t been the same.

The Eagles have made the tournament just three times out of the ACC — all of them under Al Skinner in the first few recruiting classes after the move. They haven’t been back since 2009, topping .500 in the conference just once in the last dozen seasons while compiling the worst cumulative record in ACC history.

“Any time there’s a challenge, there’s a great opportunity,” Grant said in a teleconference with reporters. “We have the opportunity to build something special.”

The Cougars won the Colonial Athletic Association regular-season and tournament championship in 2018 for their first NCAA appearance in almost two decades.

“The last time I took over as head coach, the program hadn’t been in 20 years. We wanted to take them back to a rightful place; we did it," Grant said. “We didn’t win right away. We went through some hard times. I expect at Boston College, I can’t imagine we’re going to snap a finger and everything’s going to be OK.”

Grant replaces Jim Christian, who was fired with three weeks remaining in his seventh season. Christian followed Steve Donahue, who followed Skinner, a former UMass and ABA teammate of Julius Erving who settled in South Carolina after coaching at BC and got to know Grant there.

“I’ve heard over the last two years how much he loved Boston and Boston College and how special the program is,” said Grant, who called Skinner a mentor and said he would probably use him as a consultant. “He loved the opportunity of what this program can be.”

Boston College went 4-16 (2-11) this season, shutting the program down for two weeks over COVID-19 issues and then struggling to field enough healthy, nonquarantined players when they returned. Assistant Scott Spinelli took over coaching for the final four games.

Complicating Grant's task is the lack of returning talent, with guards Wynston Tabbs and Rich Kelly — two of the team's three double-digit scorers — putting in for a transfer. Forward Steffon Mitchell is expected to explore the NBA draft while keeping open the option of returning.

“I've got to figure out who wants to be here," said Grant, who planned to meet with his current players this week. “I just want to give them the encouragement that anything is possible here. I look forward to meeting them and trying to help them become the men and the players they want to be."

One of the complaints for Skinner and his successors is that, despite following the lucrative football money to the ACC, the Eagles didn't spend as much on basketball as their new competition. Athletic director Pat Kraft said Tuesday the school was committed to back Grant with the resources necessary to compete.

“We’ll work hand in hand to make sure he has what he needs,” Kraft said.