No. 11 Villanova cruises by Butler in regular-season finale 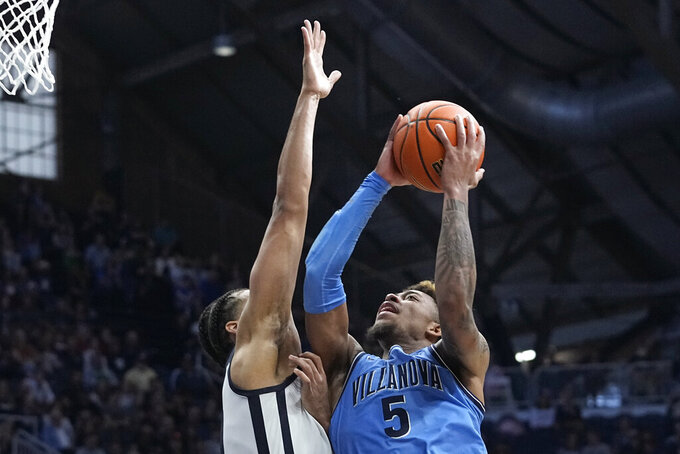 INDIANAPOLIS (AP) — Justin Moore and No. 11 Villanova got defensive in their tune-up for the Big East Tournament.

Moore scored 16 points, Jermaine Samuels added 15 and the Wildcats broke away early to beat Butler 78-59 Saturday in their regular-season finale.

“We came in and wanted to take pride in defense, playing tough and being physical, rebounding and contesting shots in the paint,” Moore said. “We knew it would be tough coming in this environment and trying to get stops. We were stayed together and stayed focused and got it done.”

Villanova scored 11 straight points during a 20-1 run that made it 23-4. The Wildcats were up by 28 midway through the second half.

“That was important to get off to a good start here,” Villanova coach Jay Wright said. “I don’t think we shot well here many times because usually because we are playing against a team that’s a great defensive team. The 3s we hit early were some tough ones. Justin hit a couple of step-back 3s, that’s what you need on the road, you need big-time players to make big-time shots.”

Caleb Daniels and Collin Gillespie each scored 11 points and Jordan Longino had 10 for Villanova. The Wildcats shot 49% while holding the Bulldogs to 36%, including a 1-for-11 start.

:We got a couple days of practice with everyone in there," Wright said. “We got Justin and Collin healthy again. It helped we got Jordan and Chris (Arcidiacono) some minutes. I feel like we got our depth and our health together going into the tournament.”

“We had some competitive minutes, but just not enough for a full 40 minutes,” Butler coach LaVall Jordan said. “Credit to Villanova, they came out with a lot of energy and made shots early. "

With the NFL scouting combine in town, coaches Andy Reid of the Kansas City Chiefs and Pete Carroll of the Seattle Seahawks were at the game.

Samuels said the Wildcats feel good about their play heading into the Big East tournament.

Villanova: The Wildcats, who had lost four of their past five games at Butler, were dominant this time in a strong tune-up game for the Big East tournament. Villanova has won seven of its last eight games with the only setback a 71-69 loss at then-No. 21 UConn on Feb. 22.

Butler: The Bulldogs had seven players go through senior day, including starters Aaron Thompson, Bryce Nze and Hodges. Bryce Golden, a senior starter, announced he will use the pandemic waiver to return next season.

No. 11 Villanova will likely improve its ranking with the home victory over No. 9 Providence Tuesday and the lopsided win over Butler.

Butler: Will be the No. 9 or 10 seed in the Big East tournament

Villanova: Will be the No. 2 seed in the Big East tournament, opening play Thursday.