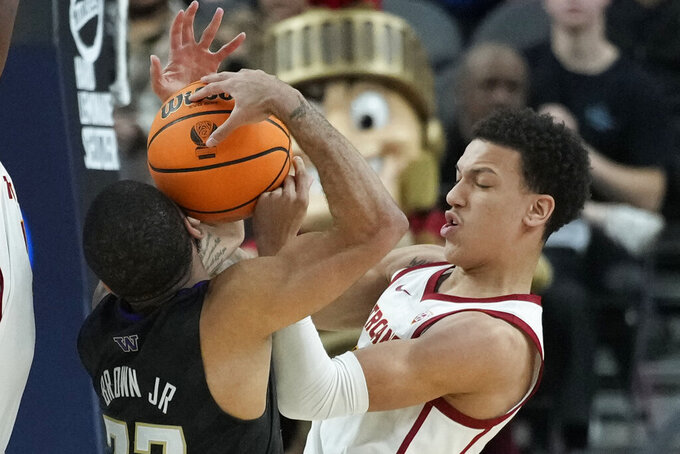 Southern California's Kobe Johnson, right, and Washington's Terrell Brown Jr. (23) battle for the ball during the first half of an NCAA college basketball game in the quarterfinal round of the Pac-12 tournament Thursday, March 10, 2022, in Las Vegas. (AP Photo/John Locher) 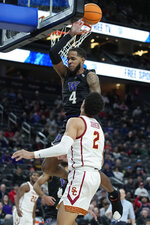 LAS VEGAS (AP) — Southern California kept stepping out of bounds, barreling into offensive fouls and throwing the ball into the hands of Washington State's players.

On an ugly offensive night, the Trojans clamped down defensively to avoid an early exit at the Pac-12 Tournament.

Boogie Ellis scored 17 points, Isaiah Mobley made two big defensive plays late and No. 21 USC overcame a rash of turnovers to hold off Washington 65-61 Thursday night in the Pac-12 quarterfinals.

“I know it's late, but we didn't want anybody to leave the arena, so we kept it very interesting until the final buzzer,” USC coach Andy Enfield said. "Our guys played great defense in the second half. That was the key because the turnovers obviously didn't help us."

The third-seeded Trojans (26-6) had trouble stopping Terrell Brown Jr. in the first half and fumbled the ball all night. USC shut down Brown in the second half, but the turnovers never stopped, including two in the final 33 seconds to give the Huskies a chance.

PJ Fuller hit a layup of a steal to pull Washington within and USC turnover it over again when Drew Peterson was called for an offensive foul.

That's when Mobley stepped in.

Reese Dixon-Waters hit two free throws with 6.1 seconds left to send USC into the semifinals Friday against No. 13 UCLA.

“People always say defense wins championships and we’re a team that believes in that,” said Mobley, who had nine points, nine rebounds and two blocked shots. “Down the stretch, I knew I had to just step up and guard.”

Brown was limited to two points in the second half after scoring 21 in the first, but Washington (16-15) had 11 steals to keep USC within reach until the end.

The Huskies couldn't make a play on offense when they needed to, hitting one shot over the final 6:43. Washington shot 8 of 34 in the second half.

“The second half was like like being in a mud-wrestling match, going back and forth,” Washington coach Mike Hopkins said. “Had some opportunities and just didn't make enough plays.”

The Trojans stumbled into the Pac-12 Tournament, losing to No. 2 Arizona and No. 13 UCLA to close out the regular season. USC got an extra day to prepare, getting a first-round bye as the No. 4 seed while Washington pulled away in the second half for an 82-70 victory over Utah in its opener.

Brown had 22 points against the Utes and got off to a fast start in the quarterfinals with nine points in the opening five minutes. The Pac-12′s leading scorer didn't let up, shooting 8 of 13 to give Washington a 39-36 halftime lead.

USC locked in on Brown in the second half, collapsing in the lane on his drives, sending the occasional trap his way on the perimeter. Brown kept trying to attack and put up several difficult shots that didn't fall as the Huskies' offense stagnated.

“He's a heck of player, just sometimes the ball goes in and sometimes it doesn't,” Hopkins said

Washington had a stretch of nearly five minutes without a field goal, yet never fell behind more than two points as the Trojans struggled with turnovers.

USC kept turning it over, including twice in the final minute, yet made just enough plays to survive.

Washington was disruptive defensively and gave itself a chance. But the Huskies couldn't find a way to get Brown untracked in the second half and had the long field goal-less streak to end their trip to Las Vegas.

USC was careless with the ball all night, yet found a way to grind out a win. The Trojans will need to be much better Friday night if they're going to have a shot against rival UCLA.

USC: Moves on to face rival UCLA in the semifinals on Friday.