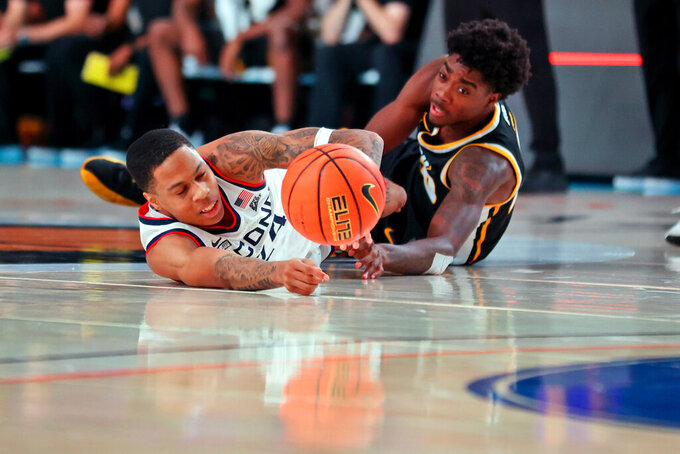 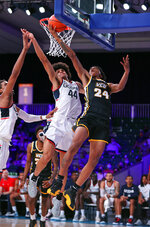 PARADISE ISLAND, Bahamas (AP) — Isaiah Whaley heard the whistle and saw the ball go through the basket, then turned to immediately punch the padded stanchion with each hand.

Then, in rapid-fire succession, the UConn graduate forward twice slammed his forehead into the pads under the basket.

The outburst of emotion followed a drama-filled few days at the Battle 4 Atlantis, both for the 22nd-ranked Huskies and Whaley himself.

Whaley scored 16 points and hit two late 3-pointers to help UConn beat VCU 70-63 in overtime in Friday's third-place game. He had missed Thursday's loss to Michigan State because he fainted briefly after playing 43 minutes during a double-overtime win against No. 19 Auburn in Wednesday’s first round.

“We were just really desperate to win that game,” Whaley said. “We knew it was going to be ugly. But the goal was just come out with a win. It didn't matter how it looked or how we did it."

The sight of Whaley briefly laying on the sideline in front of the UConn bench after Wednesday's 115-109 win against the Tigers momentarily paused the Huskies' celebration, but Whaley was quickly back up and joined the handshake line. He even made light of his episode in a Twitter post that night.

The team held him out of the Michigan State game as a precaution while saying the fainting was caused by a “combination of end-of-game excitement, fatigue and dehydration." He was on the bench Thursday but got the all-clear to play Friday.

“It was just constant fluids and food,” Whaley said. “Eating and drinking, non-stop. I've been having to use the bathroom every other second.”

The Huskies needed him Friday. He hit the tying 3 late in regulation and the go-ahead 3 at the 3:54 mark in OT. Then came his punctuating three-point play with 4.5 seconds left, followed by his work on the basket stanchion.

R.J. Cole finished with a game-high 26 points for the Huskies (6-1), who won despite shooting 33% while committing 22 turnovers. Whaley's 3 stood as the only OT basket in for either team until the final 12 seconds.

Jayden Nunn scored 21 points for the Rams (3-4), who led by four late in regulation. VCU had its own offensive troubles, shooting 36% and going 2 for 9 in the extra period.

The Rams made 14 of 24 free throws, the kind of missed opportunities that loomed large as the game pushed into extra time.

“You've got to make free throws, you can't turn the ball over late in the game or in overtime, and that's what we did,” VCU coach Mike Rhoades said. “It gave UConn some life there down the stretch in regulation and just didn't take care of that. ... I loved how we played, I love how hard we play, I love our approach. But we've got to learn from these close games.”

VCU: The Rams opened the tournament by beating Syracuse 67-55, holding the Orange to 29% shooting, but they lost to reigning national champion Baylor 69-61 in Thursday's semifinals. VCU's defense is among KenPom's national leaders in defensive efficiency (88.6 points allowed per 100 possessions) and played like it, but the Rams couldn't come up with a couple of needed baskets late.

UConn: The Huskies' first-round win over Auburn was memorable and filled with big shots down the stretch. UConn gave up the final nine points in a 64-60 semifinal loss to Michigan State on Thursday, but this time had enough to finish strong in the overtime against VCU's defensive pressure.

“We're going to get better as the year goes on,” UConn coach Dan Hurley said. “We found out a little bit about who we are here and what our blind spots are in a tournament like this.”

UConn got the last chance to avoid overtime with an inbounds play from near half-court with 0.8 seconds left, but Cole’s catch-and-turn 3 near his bench hit the rim and fell away.

VCU: The Rams get a week off before hosting Campbell on Dec. 4.