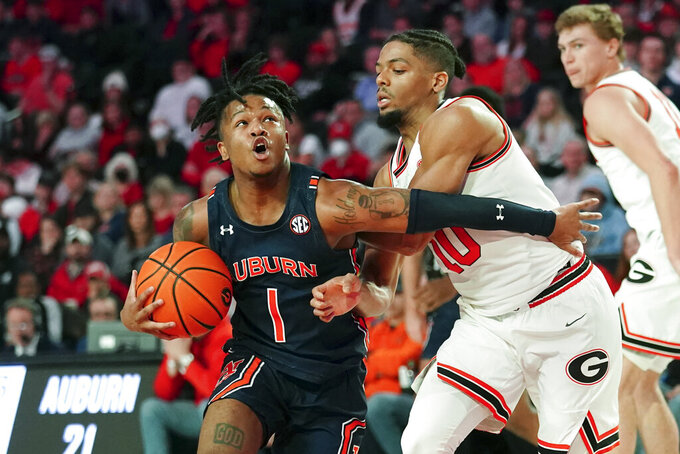 Then again, he doesn’t want his 23rd-ranked Racers to just ignore it, either.

The Racers cracked Monday’s poll for the first time since spending a week at No. 25 in March 2015. Best known recently for the Ja Morant-led group that won an NCAA Tournament game in 2019, this Murray State team has its own big moment on the AP Top 25 national schedule, first with Thursday’s trip to Tennessee State, followed by Saturday’s visit to Morehead State.

“I think you can enjoy the success that you’re having and the recognition that comes with that, but also stay committed to why you’re successful,” McMahon said. “The hard work, the toughness, the unselfishness, the balance that we have offensively and defensively.

“We have a mature team. They’ve done a great job all season long with those things.”

Murray State (22-2, 12-0 Ohio Valley Conference) hasn’t lost since falling to now-No. 1 Auburn on Dec. 22, with its other loss coming to East Tennessee State in November.

The 2019 team grabbed national attention behind Morant’s brilliance, with the guard averaging 24.5 points and leading the Racers to a first-round NCAA win against Marquette before becoming the No. 2 overall NBA draft pick.

McMahon figures that year offers lessons in playing with added attention, an asset now that the Racers are in the Top 25.

“I’m sure there’s some hype that comes with being ranked in the Top 25, but it won’t compare to the hype of Ja Morant’s sophomore season and playing in front of sellout crowds everywhere we went, all the autograph seekers and all that,” McMahon said. “Those guys have seen what that looks like.

“They also saw the way Ja Morant handled all the external things that were going on … and how he kept his focus on what matters the most, which was us getting better as a team and enjoying the journey we’re on and staying focused on just winning the next game.”

Top-ranked Auburn (22-1, 10-0 Southeastern Conference) has won 19 straight since a double-overtime loss to Connecticut in November. The Tigers play twice this week, first visiting Arkansas on Tuesday before hosting Texas A&M on Saturday.

Second-ranked Gonzaga (19-2, 8-0 West Coast Conference) faces a test with the week’s other new addition to the poll. After hosting Pacific on Thursday, Gonzaga hosts No. 22 Saint Mary’s — which entered the Top 25 on Monday for the first time since early in the 2019-20 season — on Saturday.

The Big Ten and Big East each have multiple matchups of AP Top 25 teams this week.

The biggest comes Tuesday with third-ranked Purdue (20-3, 9-3 Big Ten) hosting No. 13 Illinois (17-5, 10-2), matching a Boilermakers team that reached No. 1 for the first time earlier this season against a Fighting Illini team that has surged up the rankings since returning to the poll after a six-week stint among the unranked.

Elsewhere in the Big Ten, No. 14 Wisconsin visits No. 17 Michigan State, also on Tuesday.

In the Big East, No. 24 Connecticut has a pair of tough matchups, first against No. 18 Marquette on Tuesday and then a trip to No. 25 Xavier on Friday.

Wyoming is the top vote-getter among the week's unranked teams. Jeff Linder's Cowboys (19-3, 8-1 Mountain West Conference) have lost only once since Christmas. They host Utah State on Tuesday and visit San Jose State on Saturday.