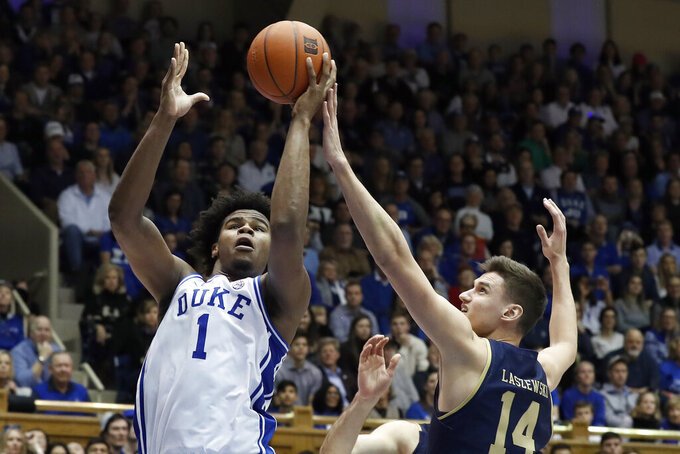 DURHAM, N.C. (AP) — Duke used a strong shooting second half to cruise to an easy win and move into first place in the ACC standings.

With Zion Williamson sitting behind the bench and a revved-up crowd cranking up the decibel level at Cameron Indoor Stadium, Duke (22-3, 12-2) vaulted past Louisville to the top of the conference. The Cardinals lost at Clemson to fall one-half game behind.

After winning by margins of two and five points in their last two games, the Blue Devils put together a performance that resembled the many blowouts they have delivered over the past 40 years under Mike Krzyzewski.

“This was like an old-fashioned Cameron game, where the crowd and the team were one,” Krzyzewski said. “During that magical stretch in the second half, everything just goes nuts.”

It was Duke’s fifth win by 30 points or more in an ACC game, a school record. The Blue Devils led by 10 at halftime, but Williamson’s entry into the arena coincided with a surge that left Notre Dame (15-10, 6-8) reeling.

A deafening cheer from the crowd early in the second half greeted the New Orleans Pelicans rookie, who played for the Blue Devils last season and made the trip to Durham from Chicago after playing in the NBA Rising Stars game Friday night.

The Blue Devils responded by shooting 7 of 14 from 3-point range and 21 of 36 (58.3%) overall in the second half. Led by Carey, Duke’s offense left Notre Dame helpless as Juwan Durham and John Mooney were powerless to stop him.

When the Irish played Carey man-to-man, he used his assortment of post moves to shoot 8 of 10 from the field.

“I feel like they were playing on my left side a little bit more today, so I just made countermoves, spinning back to my right side and going up,” Carey said. “I felt like my countermoves worked well today.”

When the Irish double-teamed Carey, Duke’s 3-point shooters made them pay. Carey assisted on a pair of 3-pointers, by Jordan Goldwire and Matthew Hurt.

“When they shoot it like that from different spots around the big fella, what do you do?” Notre Dame coach Mike Brey said.

Duke’s defense, meanwhile, flustered a normally competent Notre Dame team that starts four seniors. Notre Dame entered the game averaging 9.75 turnovers per game, fewest in the nation, but turned the ball over nine times in the first half.

The Irish had success when they were able to get the ball inside to Durham, whose 21 points marked a career high, and Mooney, who scored 19. But just as often, the Blue Devils’ defense pushed Notre Dame far from the basket, forced a turnover and was off to the races in transition. The Blue Devils outscored Notre Dame 13-0 on the fast break in the first half and 24-7 for the game.

“They don’t turn it over a lot,” Jones said. “We were just trying to pressure them like crazy. They are shooters, so we were trying to make them ball handlers rather than shooters.”

Notre Dame had won four in a row before losing in overtime Tuesday at Virginia but suffered by far its most lopsided loss of the season Saturday. The Irish hadn’t lost by more than five points since Dec. 4; their backcourt players particularly had a dreadful day, as T.J. Gibbs and Rex Pflueger combined to shoot 0 of 13 from the field with zero points.

“We had a hard time getting any looks because of their ball pressure,” Brey said. “For us, the whole last 10 minutes in timeouts I was talking about Monday night because we’ve got to kind of turn around Monday here and get ready to play against North Carolina.”

Duke, meanwhile, won its seventh game in a row with a performance that had Krzyzewski speaking in superlatives. He said it was one of Carey’s best games, and said Jones was magnificent.

Krzyzewski said Duke shot the ball so well for a stretch of the second half that it’s unrealistic to expect similar results with consistency. But with Jones as the anchor, the Blue Devils demonstrated that they have a defense that can frustrate even a well-practiced, veteran opponent.

“The kid (Jones) is a special, special guy,” Krzyzewski said. “Leading the break, and his mate, Jordan Goldwire, the defense those two kids are playing is at a high, high level. Our goal was to take away as many threes as possible, and we did that.”

Duke has won six in a row over Notre Dame after losing four of five from 2015 to 2016 … Mooney, who entered the game tied for first in the nation with 20 double-doubles, fell just short of another as he finished with nine rebounds to go with his 19 points. ... Carey has scored at least 20 points in four of his last nine games.