No. 8 Villanova topples No. 20 UConn to make Big East final 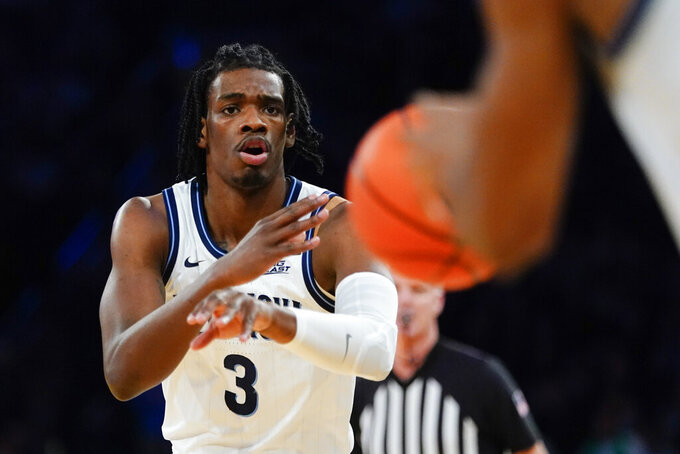 Villanova's Chris Arcidiacono (4) passes the ball to Jermaine Samuels during the first half of an NCAA college basketball game against Connecticut in the semifinals of the Big East men's tournament Friday, March 11, 2022, in New York. (AP Photo/Frank Franklin II)

NEW YORK (AP) — Jermaine Samuels tossed up off-balance shots that fluttered through the net and 3s that had Villanova rocking. Brandon Slater may as well had his name in lights on the marquee with a block that will live in Big East lore.

Just the way UConn drew it up?

“We dared them to beat us,” coach Danny Hurley said.

Sure enough, the Huskies minimized the damage from Villanova stars Collin Gillespie and Justin Moore, knocking the door open for Samuels and Slater to get the Wildcats to another conference championship game.

Samuels had 21 points and 12 rebounds, Slater had 15 points and a highlight-reel block to help No. 8 Villanova beat No. 20 Connecticut 63-60 on Friday night.

The second-seeded Wildcats (25-7) play fourth-seeded Creighton in Saturday night’s title game at Madison Square Garden, where the Wildcats are at home in March at MSG under coach Jay Wright. They won the tournament in 2015 and 2017-2019.

Gillespie and Moore are 1-2 on the season-scoring list but were held to a combined 11 points.

“You’ve got to have other players, great players make plays,” Wright said. “And that’s what makes us a good team.”

The Huskies (23-9) went 4:44 without a basket late in the second half until Adama Sanogo scored with 54.5 seconds left to pull them to 60-57. The scoring drought crushed third-seeded UConn.

Samuels, playing with a bad back, made two free throws and that seemed like it would be enough for Villanova. But UConn’s Andre Jackson fired a moonshot of a 3 to make it 62-60. The Wildcats held on from the line.

“We can’t let his break us right here,” Martin said.

One of Villanova's game-saving plays came with 5 minutes left: The Huskies snagged a loose ball and Martin appeared to have an open, easy bucket when Slater bounded out of nowhere and used his outstretched left hand to knock the ball off the glass. The crowd erupted and the Wildcats kept their seven-point lead.

“It was just a play, try to go make a play for my teammates and my coaches," Slater said. “And I saw him go up, and I felt like I could contest it. When I got up, it just so happened that I got lucky and I got the block. ”

Villanova's first five baskets of the game were 3s and the team made eight overall in the half. Samuels, though, went inside to send Villanova into the half with a 33-32 lead by drawing an and-1 on a shot that kissed the backboard. He also made the free throw — expected from a Villanova team shooting 83% on the season.

“We never felt like we had them under control, you know,” Wright said.

Hurley fed the Huskies' faithful throughout the game. When Isaiah Whaley blocked Samuels’ shot and got in his face early in the first half, Hurley stomped on the court, waving his arms toward the crowd for more noise. When Tyler Polley hit a 3, he pointed at his head as he ran back on defense —- and Hurley thumped his pointer finger against his forehead in unison.

UConn's goals go beyond a run to the Big East semis.

“Villanova is the type of team that you’d be facing in a Sweet 16 game, potentially," Hurley said. "That’s their quality. We had a bunch of opportunities in and around the basket.”

Jim Calhoun, who coached UConn to three national championships, has been at the Big East Tournament this week — as a spectator, not a coach. He said he likes where the program is headed under Hurley.

“I would have been very upset if I was coaching, because I love the Big East,” he said of that AAC move.

Villanova: Plays Creighton, which crushed Providence 85-58 in the first semifinal. The teams split two games with early in the regular season, with the home team winning each time.