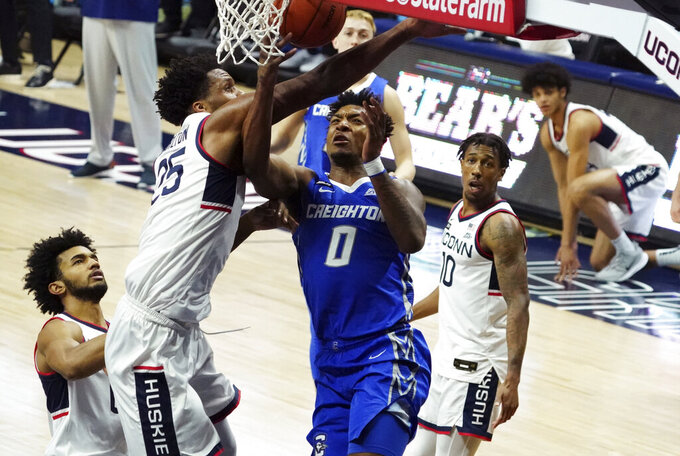 STORRS, Conn. (AP) — No. 9 Creighton had already lost two close games this season and was facing a third defeat before rallying on Sunday to beat UConn in overtime.

Christian Bishop scored 19 points and the Bluejays used a 9-0 run in the extra frame to secure a 76-74 win over the Huskies in Connecticut's first conference game since returning to the Big East.

“You better get excited for any win that you can get, because it's a grind-it-out league” coach Greg McDermott said. “Throughout the league, nothing is going to be easy."

James Bouknight scored a career-high 40 points for the Huskies (3-1, 0-1), who were playing for the first time in 17 days because of coronavirus-related issues.

“We knew not the entire team can score like he can,” Bishop said. “So, by making him beat us by himself, that's what you've gotta do.”

Creighton led by as many as 12 points in the first half, but trailed by four points with 21 seconds left and had to rally to send the game to OT.

UConn's R.J. Cole, who scored 12 points, had a chance to ice the game for the Huskies, but missed a pair of foul shots on the other end.

Damien Jefferson hit a jumper in the lane just before the buzzer to tie the game.

“Let's face it, we've lost a couple games, at Kansas and against Marquette, where we really struggled from the foul line, ” McDermott said. “And today, we got the benefit of them missing a couple of free throws late that allowed us to send it to overtime. You hope, over the course of the season, those things even themselves out.”

Isaiah Whaley scored UConn’s first basket in the new Big East with a short jumper and the Huskies had an early 8-3 lead after a 3-point play by Bouknight, who drew a foul on a driving reverse layup off a steal from R.J. Cole.

But the Bluejays scored the next nine points and went on an 15-3 run, sparked by Damien Jefferson’s second 3-pointer.

Bouknight’s 3-pointer from the top of the key gave the Huskies a 36-35 lead early in the second half and the teams went back and forth from there.

There were 15 lead changes in the game

UConn fell behind in the first half while attempting 14 shots from behind the arc and making just two of those. They finished with seven 3-pointers on 30 attempts. Creighton had the opposite issue. The Bluejays made four of their nine 3-point attempts in the first half, but were 3 of 18 after that.

Creighton: The Bluejays finished 2-0 on their first East Coast trip of the season after a win at St. John's on Thursday. Bishop scored 12 of his points after intermission.

UConn: Bouknight was 13 of 24 from the floor and 9 of 12 from the foul line. Hurley said UConn will continue to struggle until it can find another scorer to compliment their star.

UConn: The Huskies were scheduled to play at DePaul on Wednesday, but because of a positive coronavirus test in the Blue Demons program last week, the Connecticut Department of Public Health recommended the Huskies not travel to Chicago. It is the sixth game this season UConn has had canceled or postponed. Its next scheduled game is Dec. 30, when the Huskies would host DePaul, but the game in Chicago may be played before that.