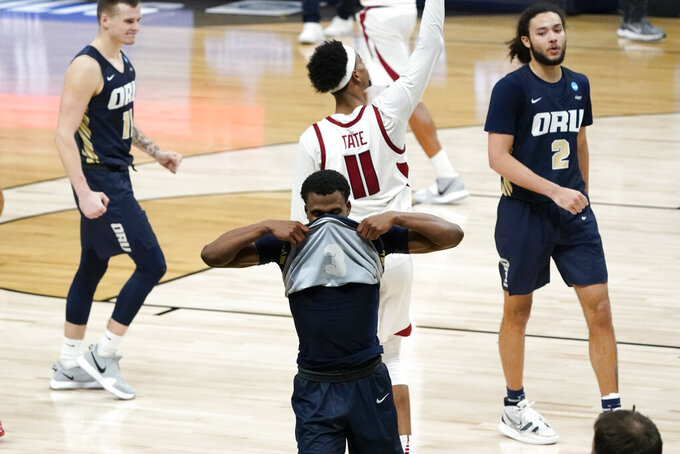 Until Max Abmas' last shot hit the front of the rim and bounced away at the buzzer, it looked as if Oral Roberts' improbable run in the NCAA Tournament just might keep going Saturday night.

Coach Paul Mills thought the shot was going in. So did Abmas, who dribbled down the court with 3 seconds left and got himself a great look at the basket.

And so did all those Golden Eagles fans, the ones who've been behind them for the long haul as well as the ones who jumped on the bandwagon as the team from the small evangelical school in Tulsa, Oklahoma, tried to do what no other No. 15 seed had ever done.

Oral Roberts was stopped just short of the Elite Eight, losing 72-70 to third-seeded Arkansas in the South Regional semifinal.

“Nobody thought we would be here, so just to see everything we accomplished ... something I'll remember for the rest of my life," said Abmas, the national scoring leader who played every minute of the Golden Eagles' final six games.

Oral Roberts finished fourth in the Summit League but won the conference tournament to automatically qualify for the NCAAs. Led by Abmas and Kevin Obanor, the high-scoring Golden Eagles knocked off second-seeded Ohio State 75-72 in overtime and seventh-seeded Florida 81-78 to become the second No. 15 seed, and first since Florida Gulf Coast in 2013, to make the Sweet 16.

They led Arkansas by as many as 12 points in the first half before the Razorbacks imposed their will inside and Oral Roberts went cold from deep.

The Razorbacks had 18 second-chance points off 18 offensive rebounds, and Oral Roberts went 2 of 14 on 3-pointers in the second half, missing its last 11.

So ended an 18-11 season and the school's deepest NCAA run since the 1974 team went to a regional final.

“Even coming into the tournament, we all knew it was bigger than us,” Abmas said. “We wanted to represent the university to the best of our abilities. That’s the mindset we had every night coming out — just fighting with each other, loving each other and try to get wins and put ORU on the map. We did our job.”

Fourth-year coach Paul Mills blamed himself for the loss because he picked up an early technical foul.

“I’ve gotten three technical fouls, including tonight, in my entire career, and to get a technical when you lose by two, it’s a tough pill to swallow,” Mills said.

Mills was T'd up after Carlos Jurgens was called for an offensive foul.

“I don't curse, so I never cursed,” Mills said.

Mills said he was upset because shortly before the Jurgens foul, there was no call when Arkansas' Justin Smith lowered his shoulder and ran over Obanor.

Mills said he raised his voice while pointing out that his player, on a similar play, was called for a foul. Mills said he was told he got the technical for yelling.

“In my mind, it’s the only way you can overcome the noise,” Mills said. “You have to raise your voice. I just told them that’s the same call, and that was it, and they gave me the technical foul.”

Still, the Golden Eagles had a chance to win at the end. They had to go the length of the court on the final play, and Mills said it was executed perfectly.

Abmas got the ball and dribbled to the right wing, where he launched a contested 3-pointer that would have won the game.

“Nothing I would have done different,” he said. “I guess shoot it up a little bit more. When it left my hands it felt good. It ended up coming up short and we didn't get the job done.”

Abmas said the loss was disappointing; the season was not.

“The job wasn't just to get to the Sweet 16,” he said. “The job, of course, was to get to the national championship and win it. We came up short but all the stuff we accomplished this season is something all the guys will celebrate and remember the rest of their lives.”