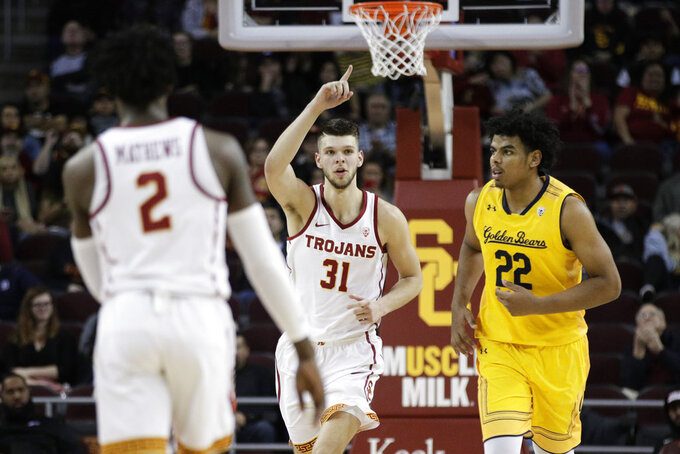 Southern California's Nick Rakocevic, center, celebrates his basket as he makes his way down the court past California's Andre Kelly during the second half of an NCAA college basketball game Thursday, Jan. 3, 2019, in Los Angeles. USC won 82-73. (AP Photo/Jae C. Hong) 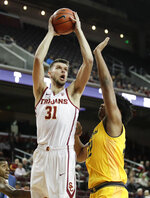 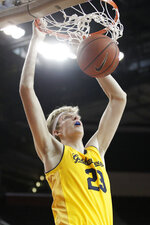 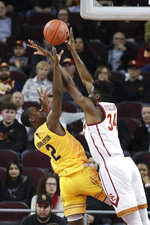 LOS ANGELES (AP) — USC might be lacking in depth, but Nick Rakocevic and Bennie Boatwright can still pose plenty of matchup problems.

The frontcourt duo combined for 46 points as the undermanned Trojans opened Pac-12 Conference play with an 82-73 victory over California on Thursday night.

"Bennie and I like playing the inside game," Rakocevic said. "With his size he can create things off the dribble. Opposing teams aren't comfortable in a pick-and-roll with two guys that size."

Rakocevic, who also had eight rebounds, has three games this season where he has scored 20 points or more. Boatwright, who missed the first two games this season due to a knee injury, is averaging 17.5 points over the past four games.

The two will need to continue to play well as the Trojans are down to seven healthy scholarship players. USC announced on Tuesday that Jordan Usher is transferring and freshman Elijah Weaver injured his ankle during a pregame walkthrough before Thursday's game.

"We've had so many freak things happen. It seems like guys get injured every week," USC coach Andy Enfield said. "It is very challenging. It is hard to get in a rhythm. We need our guys to get healthy."

Four of the five starters played 35 minutes or more and six players saw 18-plus minutes. Despite the short bench, the Trojans committed a season-low five turnovers while having 21 assists in winning their third straight.

USC (8-6, 1-0 Pac-12) led most of the game and were up 15 midway through the second half. The Golden Bears though made things interesting late, going on a 17-6 run to get within 71-67 with 2:45 remaining. Shaqquan Aaron though made a huge 3-pointer on the ensuing trip to end any momentum.

"We had some open looks that we normally knock down. If we just shot the ball better I think it would have been a totally different game," California coach Wyking Jones said.

The Golden Bears outscored the Trojans 16-9 the remainder of the half — including going 3 of 5 on 3-pointers — as USC held a 37-33 lead at halftime.

California: The Golden Bears have dropped eight straight in Pac-12 play and have gone winless in nine straight conference games on the road.

USC: The Trojans shot 53.4 percent from the floor. It is unbeaten in seven games this season when making over half of its shots.

USC point guard Derryck Thornton had his first double-double with 13 points and a career-high 12 assists. The junior ended up three rebounds away from a triple-double.

"He played a great floor game. He ran the team tonight and played under control. We are starting to get more consistency from him," Enfield said.

Cal center/forward Connor Vanover, who missed the past three games due to broken nose and concussion, had career highs in points (10) and blocked shots (three).

California: Travels to UCLA on Saturday.