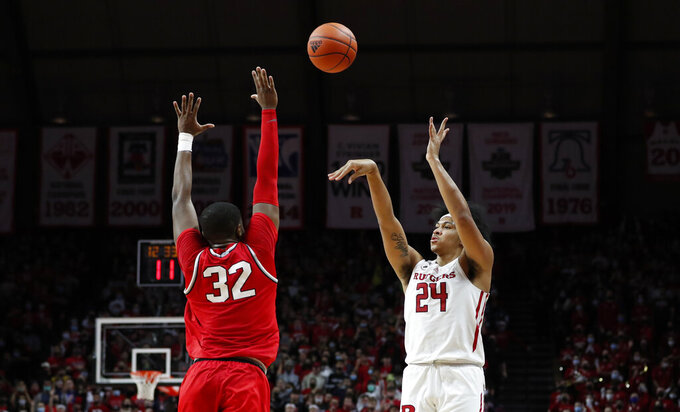 PISCATAWAY, N.J. (AP) — Rutgers is never out of a basketball game when playing at home and fifth-year senior Geo Baker is feeling it.

Baker had 25 points, including the go-ahead free throws with 18.8 seconds left, and Rutgers scored the final 10 to stun No. 16 Ohio State 66-64 on Wednesday night.

“I had it going a little bit tonight. Tonight was my night,” said Baker, who also had six assists and no turnovers. “My teammates found me and I tried to make plays. Everyone was just making winning plays and I was the guy knocking down shots.”

Baker scored eight points in the game-ending spurt and assisted on a dunk by Cliff Omoruyi that tied it 64-all with 1:13 to play.

Omoruyi added 13 points and Paul Mulcahy had 12 as the Scarlet Knights (14-9, 8-5 Big Ten) earned consecutive wins over ranked teams for the first time since January 2008. They thumped Michigan State 84-63 last week and are 12-2 at Jersey Mike's Arena.

Rutgers' defense did not allow the Buckeyes to score in the final 3:48, and their last two shots were blocked. Ron Harper Jr. blocked a layup attempt by Branham with 3.6 seconds to go, and a shot from the corner by Justin Arhens was partially blocked and never got near the rim.

“We need to close games with a little more force offensively," Ohio State coach Chris Holtmann said. "We didn’t play with enough force. Their activity bothered us late. You are going to have to play with force on the road, and we just didn’t finish plays when we needed to. Playing on the road is hard. I don’t think we’ve mastered that.”

Rutgers' chances appeared dim when Key hit two free throws with 3:48 to play to give Ohio State a 64-56 lead, its biggest of the game.

“We all came together in the huddle and said we've got four minutes left," said Baker, who was 9 of 14 from the field. “It was a four-minute round right here and we had to turn it around. We've got to play, make plays, get stops, and that's what we did.”

Baker took over. He made two free throws with 3:07 to go and a layup with 2:33 left after the Buckeyes missed two shots.

The biggest sequence of the game came on the ensuing inbounds play. Key broke free after taking a length-of-the-court pass but Caleb McConnell caught him from behind and blocked the shot, sending the sellout crowd into a frenzy.

“I think he just thought he had a free run to the rim,” McConnell said. “I just wanted to win and that’s what I do, come up with plays.”

After a shot-clock violation, Omoruyi tied the game and Baker was fouled on the possession following Branham's miss, putting Rutgers ahead.

Neither team led by more than four in a physical first half in which the officials called just a dozen fouls. The Scarlet Knights took a 32-31 lead on a shot in the lane by Aundre Hyatt just before the buzzer.

Ohio State: Not a good loss, but Rutgers' victims at home also include Purdue when it was ranked No. 1 this season. When the Scarlet Knights beat the Boilermakers they rallied from 10 down with eight minutes left.

Rutgers: Slowly working its way back into NCAA Tournament contention. The Scarlet Knights just don't win on the road.

“This team is getting better,” coach Steve Pikiell said. “I like that. Every year our teams get better. We get better, and it’s the best league. People don’t understand the depth of this league is like no other.”

Rutgers: Plays at No. 14 Wisconsin on Saturday for its third of six straight games against ranked opponents.