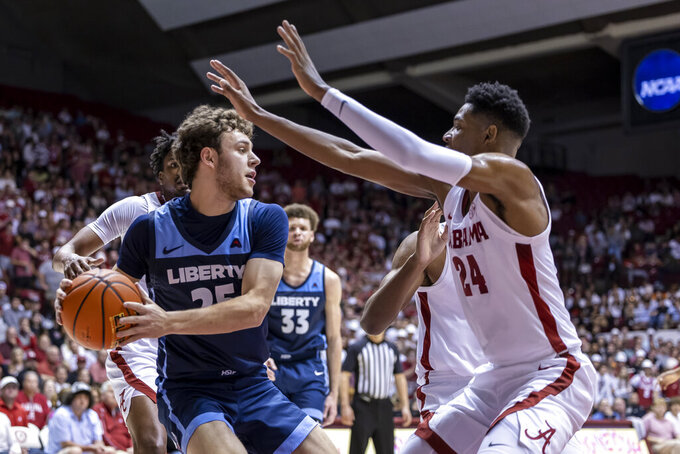 Alabama (2-0) led by nine at the break and broke away by scoring 11 straight points during a 17-2 run early in the second half.

“That was a pretty dominating win,” Alabama coach Nate Oats said. “We got stuff to work on still, but that’s a quality team that’s picked to win the (Atlantic Sun Conference) and there’s already been three (Atlantic Sun) teams go in and beat high-major teams already. They’re going to go win a lot of games.”

Liberty’s Darius McGhee, second in the nation in scoring last season at 24.6 points per game, was held to eight on 3-for-11 shooting, including 1 of 5 on 3-pointers.

“Nimari’s got length, he’s got a 6-foot-10 wingspan, high IQ guy, plays hard, thinks about the right stuff,” Oats said. “We thought Nimari’s length and size could bother McGhee, and I think it did. He did a good job there.”

“I’ve sat on that sideline for a few games as a Liberty representative and I just don’t remember us being as overwhelmed as I felt like we were today,” Flames coach Ritchie McKay said.

“I just felt like we rushed a little bit offensively and defensively, we’ve been built on a defensive identity. I’ll do a better job of coaching. They got 38 foul attempts. That’s part of their game plan, but I have to do a better job of teaching our guys how to keep them out of the paint without fouling," he said.

Shiloh Robinson had 11 points for Liberty and Brody Peebles added 10.

Alabama’s 3-point shooting success stands to be a decent predictor of its overall success, and seeing a drastic improvement was important.

“It felt good to see shots go in because we all worked so hard over the summer and in the fall, to see those shots go in was very relieving for all of us,” Sears said.