Siena rolling at home and on road as March Madness looms 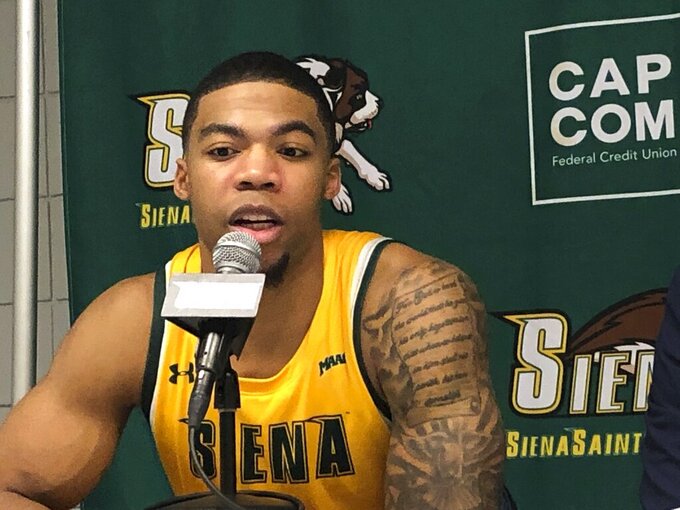 Siena forward Elijah Hughes, a transfer from Notre Dame, speaks Wednesday night after scoring 24 points and snaring 10 rebounds in a 77-55 victory over Niagara at the Times Union Center in Albany, N.Y., Wednesday, March 4, 2020. The victory completed a 14-0 record at home and clinched at least a share of Siena's eighth Metro Atlantic Athletic Association title and first in a decade. (AP Photo/John Kekis)

ALBANY, N.Y. (AP) — Six weeks ago, Carmen Maciariello's first year as head coach at Siena was a split season — his Saints were unbeaten at home and winless on the road.

The Saints have solved that problem. At the right time, too.

Siena has won eight straight and 11 of 12 since a one-point loss at Niagara in mid-January to zoom to the top of the Metro Atlantic Athletic Conference. The Saints can clinch the league title outright and the top seed for next week's conference tournament with a victory in the regular-season finale at Monmouth on Friday night or a loss by second-place Saint Peter's to Iona.

“This is what you sign up for, meaningful games in March," said Maciariello, who graduated from Siena 19 years ago. “It's a credit to the guys for getting us to this spot in the season. No one's guaranteed to have a chance to play for a conference title in their senior year.”

Maciariello points to that Niagara loss — Siena led the entire game until the final minute — as a turning point for his Saints (18-10, 14-5), who lost their first nine road games. They've since gone 4-1 away from their home court at the Times Union Center in downtown Albany, and they snapped that skid in a big way with an 87-64 rout of Iona, the four-time defending MAAC Tournament champion, on Jan. 31. Seven players scored in double figures as Siena handed the Gaels their largest home defeat in 13 years.

"That was kind of what started that fire and that sense of urgency for this group," said Maciariello, Siena's third coach in three years. “I think that created that sense of urgency and that buy-in that we needed to kind of get over the hump. It's pretty impressive when everyone was talking about how we couldn't win on the road. It's exciting."

Maciariello succeeded Jamion Christian, who left after one season for the head job at George Washington to be close to his Virginia roots. Siena had an impressive turnaround under Christian, going 17-16 a year after finishing 8-24 under Jimmy Patsos, the program's third-worst showing since it moved to Division I more than four decades ago and its third straight losing season. Patsos resigned amid a wide-ranging investigation by the school that unearthed allegations of problems ranging from abusive conduct to financial improprieties within the men's basketball program.

Christian's first signee was point guard Jalen Pickett. An unheralded freshman from Rochester, New York, Pickett quickly became a steadying force. He was named rookie of the week a league-record 11 times, averaged 15.7 points, finished the year ranked ninth nationally in assists per game (6.7), and had an assist-to-turnover ratio of 2.76, fourth among Division I freshmen.

After his breakout season, Pickett participated in the inaugural NBA G League Elite Camp in Chicago, worked out for several NBA teams, and briefly entered his name in the NBA draft before deciding to return to school. Picked in the preseason as the conference player of the year, Pickett hasn't skipped a beat as a sophomore, averaging 15.3 points and 5.8 assists while directing the league's top offense (72.1 points per game).

The Saints lost leading scorer Evan Fisher to graduation last spring, but Notre Dame transfer Elijah Burns has more than filled that void. The 6-foot-8, 236-pound Burns is averaging 14.7 points and 5.9 rebounds, leads the MAAC in shooting percentage (61.9), and is hitting 85.4% from the free-throw line, one of the top marks in the country among forwards.

Junior 6-7 swingman Manny Camper is averaging a double-double (13.6, 10.1) and has helped Siena improve its rebounding margin from minus-4.1 to plus-4.1; sophomore Donald Carey, a transfer from Mount St. Mary’s, is averaging 11.2 points; freshman guard Jordan King, an Albany native, is averaging 4.4 points off the bench; and Garry Harris Jr., Maciariello's first signee, has started 10 of the last 11 games and is averaging 5.3 points.

For Burns, not playing last season because of NCAA transfer rules has been well worth it. Born and raised across the Hudson River in Troy, the season has been the best sort of homecoming he could have imagined after playing in only 44 games over three-plus seasons with the Irish and averaging 2.2 points, 2.1 rebounds, and nine minutes.

Siena avenged that loss to Niagara with a 22-point win over the Purple Eagles at home on Wednesday night as Pickett had a season-high 12 assists and Burns contributed 24 points and 10 rebounds to help the Saints clinch at least a share of the program’s eighth regular-season MAAC title — and first since 2010, Fran McCaffery's final season as coach before he left for Iowa. That completed a 14-0 record at home — on Senior Night — and set up Friday night's critical matchup against Monmouth (18-12, 12-7), which has lost only once at home this season.

“It's my first season being a head coach at my alma mater, a place that I love dearly,” Maciariello said afterward, Burns and Pickett at his side. “To do what these guys beside me, the guys in that locker room (have done), it's undescribable.

"We control our own destiny and that's all you want — the ability to kind of write your own story.”